ADL says Rogers should not have used Star of David, but believes he had "no anti-Semitic intent."

By JTA
Roger Waters 370
(photo credit: REUTERS)
Advertisement
THE HAGUE, Netherlands  — Roger Waters, a rock musician critical of Israel, used a giant, pig-shaped balloon emblazoned with a Star of David and symbols of dictatorial regimes during a recent concert in Belgium.Waters, who recently urged other performers to boycott Israel and compared Israel to apartheid South Africa, was singing on stage on July 20 under the balloon while toting a machine gun replica and wearing a long black leather jacket with a red-and-white arm band, reminiscent of a Nazi uniform. 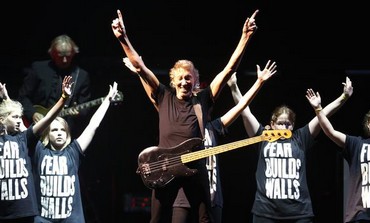 Roger Waters (Reuters)
The former Pink Floyd member was singing “get him up against the wall, that one looks Jewish and that one’s a coon, who let all of this riff-raff into the room” – the lyrics of the song “In the Flesh.”Thousands of fans shouted his name and applauded as he stood on stage pretending to fire the replica.Michael Freilich, editor-in-chief of the Belgian Jewish monthly Joods Actueel, called on the government to issue a statement condemning what he called “an anti-Semitic display” at the concert.The Anti-Defamation League said that Waters has a long history using these symbols in his concerts. “While we wish that Mr. Waters would have avoided using the Star of David, we believe there is no anti-Semitic intent here,” an ADL spokesman said.