"This law is a symbolic gesture to further recognize the terrifying suffering of people who have been through the darkest of moments." 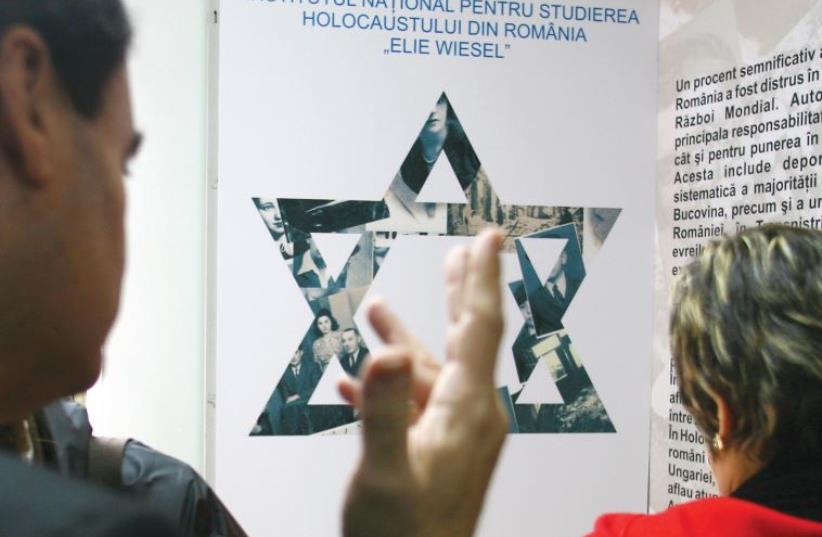 ROMANIAN JEWS visit an exhibition about the Holocaust in Romania at the Elie Wiesel Institute for Holocaust Studies during the annual Holocaust Remembrance Day in Bucharest in 2006.
(photo credit: REUTERS)
Advertisement
Romania's parliament has approved legislation allowing direct financial support to Holocaust survivors in the former Nazi ally state during World War Two, the architect of the law said on Friday.Lawmaker Silviu Vexler said beneficiaries would include those deported to ghettos or concentrations camps, survivors of the death trains and forced labor detachments, refugees and those imprisoned for ethnic reasons or forcefully removed from their homes."This law is a symbolic gesture to further recognize the terrifying suffering of people who have been through the darkest of moments," said Vexler, who represents the Federation of the Jewish Communities in Romania.The law will set a monthly payment of up to 400 lei ($97.98) per month for each year of deportation or detention. It will be enforced from July 1.Its provisions also apply to survivors of the Holocaust who no longer have Romanian citizenship or reside in the country, as well as to the living partner of a Holocaust survivor who passed away if they did not remarry, Vexler said.It was not immediately clear how many people might be eligible for the payments or what the total cost might be to the Romanian state.Romania was an ally of Nazi Germany until August 1944 when it changed sides to the allies, and much of the Jewish property seized during the war was later nationalized by the communist dictatorship that followed.An international commission, in a 2004 report, put the total number of Romanian and Ukrainian Jews who perished in territories under Romanian administration at 280,000 to 380,000.Romania used to have a pre-war Jewish population of about 800,000 but now fewer than 11,000 Jews live in the European Union member state, which has a total population of around 20 million.After the collapse of communist rule in 1989, Romania passed laws to return property to its original owners but the process has been hampered by red tape