In a special interview with NBC News, Russian President Vladimir Putin adamantly denied all allegations concerning his government's involvement in US affairs. 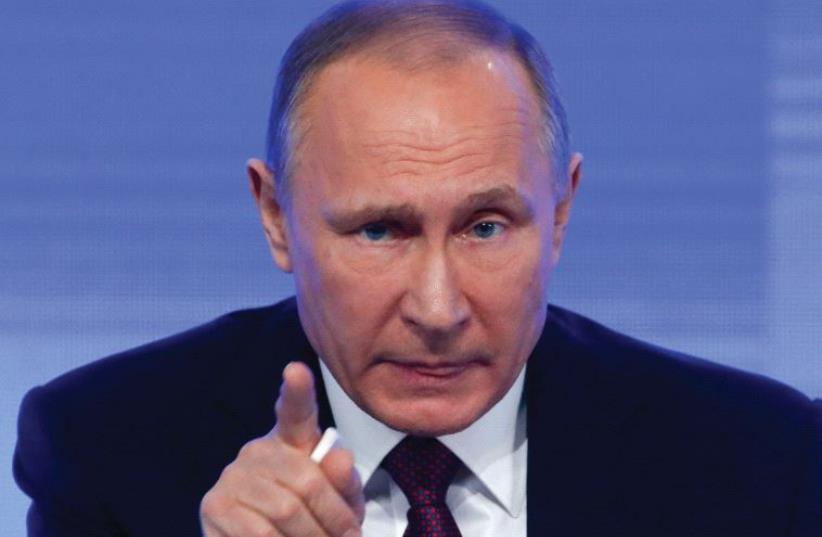 RUSSIAN PRESIDENT Vladimir Putin speaks during a news conference in Moscow in 2016.
(photo credit: REUTERS)
Advertisement
Russian President Vladimir Putin strongly denied he had any compromising material about US President Donald Trump in a sometimes combative televised interview broadcast on Sunday."Well, this is just another load of nonsense," Putin said on NBC News' "Sunday Night with Megyn Kelly," when asked whether he had any damaging information on the Republican president.The remarks were the latest in a series of denials from Moscow that have had little impact so far on a political crisis in the United States over potential links between Russia and Trump's inner circle.The issue will be front and center this week in Washington, where former FBI Director James Comey is due to testify on whether Trump tried to get him to back off an investigation into alleged ties between Trump's election campaign and Moscow.Comey, who was leading the Federal Bureau of Investigation's probe into alleged Russian meddling in last year's US presidential election, was fired by Trump last month, four years into his 10-year term.Putin also told NBC that regardless of Trump's previous travel to Russia as a businessman, he had had no relationship with him and had never met him. Putin noted that executives from perhaps 100 American companies were currently in Russia."Do you think we're gathering compromising information on all of them right now or something?" Putin asked, before saying: "Have you all lost your senses?"Trump has offered contradictory accounts of his relationship with Putin over time but has also said the two never met. The two have spoken several times by phone since Trump's election.
Putin says he can prove Trump did not pass Russia secrets (credit: REUTERS)
Trump has called an FBI investigation into alleged ties between his campaign and Russia a "witch hunt" designed to undermine the legitimacy of his 2016 election win.Trump has also disparaged a dossier of unsubstantiated allegations that purported to show Russian intelligence operatives had compromising information about him, but which he has described as a "hoax."US intelligence agencies concluded in January that Moscow tried to tilt the election campaign in Trump's favor, including by hacking into the emails of senior Democrats, a charge the Kremlin denies."They have been misled," Putin told NBC, in an interview NBC said was recorded on Friday. "And they aren't analyzing the information in its entirety. I haven't seen, even once, any direct proof of Russian interference in the (US) presidential election."Trump has denied any collusion but the FBI and congressional probes into the Russia matter have dogged the early months of his presidency.PUTIN: "I DIDN'T EVEN REALLY TALK" TO FLYNNFormer CIA director John Brennan said last month he had noticed contacts between Trump's campaign associates and Russia during the 2016 election and grew concerned Moscow had sought to lure Americans down "a treasonous path."After Comey's dismissal, news reports emerged that Trump asked Comey to end the probe into former national security adviser Michael Flynn during a February meeting in the Oval Office, the day after Flynn was fired for misrepresenting his contacts with the Russian ambassador, Sergei Kislyak.Flynn has declined to testify to the US Senate Intelligence Committee about his Russian ties, invoking his constitutional right to avoid self-incrimination.Putin downplayed Flynn's appearance with him at a December 2015 gala dinner in honor of the Russian television network Russia Today (RT), which US officials consider a state-run propaganda outlet."I made my speech. Then we talked about some other stuff. And I got up and left. And then afterwards I was told, 'You know there was an American gentleman, he was involved in some things. He used to be in the security services'," Putin said."That's it. I didn't even really talk to him. That's the extent of my acquaintance with Mr Flynn," he added.Reuters has reported that Flynn and Trump's son-in-law and close adviser, Jared Kushner, discussed with Kislyak the idea of creating a back channel between Trump and Putin that could have bypassed diplomats and intelligence agencies.Putin said he was unaware of any such discussion and criticized NBC for asking about contacts between the ambassador and the Trump administration."You created a sensation out of nothing. And out of this sensation, you turned it into a weapon of war against the current (US) president," Putin said.