At least 20 killed in latest shock, some trapped; no irregularities reported at nuclear facilities in area. 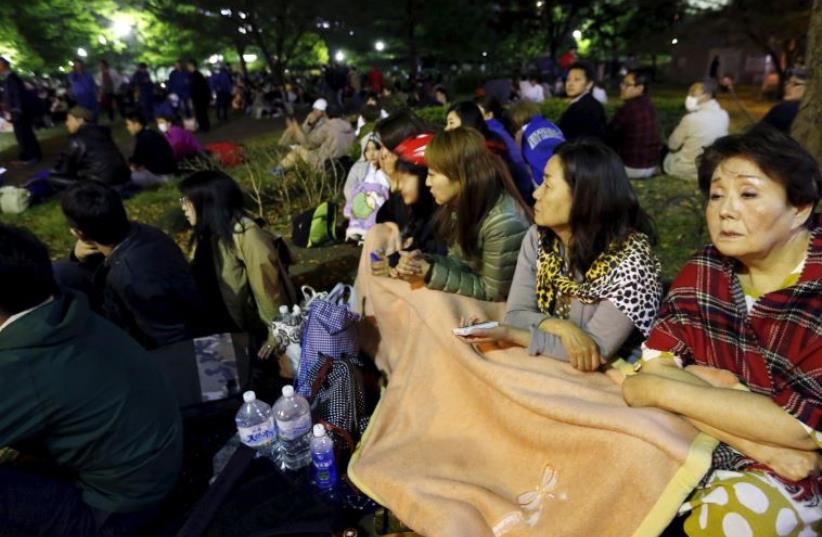 Evacuated residents gather at Shirakawa park after an earthquake in Kumamoto, southern Japan, in this photo taken by Kyodo April 16, 2016.
(photo credit: REUTERS)
Advertisement
TOKYO - A powerful 7.3 magnitude earthquake struck southern Japan early on Saturday, killing at least 20 people, injuring more than 1,000 and trapping people in collapsed buildings, barely a day after a quake killed nine people in the same region.Rescuers dug through the rubble of collapsed buildings and mud and debris on Saturday to try and reach those trapped, but continued aftershocks hindered rescue efforts and fueled fears of more powerful quakes."Nothing is more important than human life and it's a race against time," said Prime Minister Shinzo Abe, warning rescue efforts were critical with wet weather forecast overnight, which could further damage weakened buildings and cause landslides."I want rescue activities to continue with the utmost effort," Abe said at a government meeting after the disaster.The epicenter of the quake was near the city of Kumamoto on the southern island of Kyushu and measured at a shallow depth of 10 kms (6 miles), the USGS said.Television footage of the area showed fires, power outages, collapsed bridges and gaping holes in the earth. Residents near a dam were told to leave because of fears it might crumble, broadcaster NHK said, while the 400-year-old Kumamoto Castle in the center of the city was badly damaged."I don't mind standing in line. I'm just thankful for some food," said a man in his 60s waiting in line for meals served by Self Defense Forces personnel in the town of Mashiki, close to the epicenter.Factories producing auto parts and tech components for companies including Sony Corp and Honda Motor Co halted production as they assessed the damage.The quake triggered a tsunami advisory which was later lifted and no irregularities were reported at three nuclear power plants in the area, a senior government official said.People still reeling from Thursday's 6.4 shock poured onto the streets after the Saturday earthquake hit at 1:25 a.m. (1625 GMT).TV Asahi showed rescue efforts for what it said were 11 people trapped in a university apartment in the town of Minami Aso and NHK reported that people were trapped in a nursing home in the town of Mashiki.Local media reported 20 deaths and more than 1,000 people treated in hospitals.Chief Cabinet Secretary Yoshihide Suga said nearly 80 people were believed trapped or buried in rubble. Extra troops would be sent to help, with up to 20,000 due by Sunday, as well as more police, firefighters and medics, he said."We are making every effort to respond," Suga said.Many frightened people wrapped in blankets sat outside their homes while others camped out in rice fields in rural areas surrounding the main towns. About 170,000 households were without power and 385,000 without water, Suga said.The region's transport network suffered considerable damage with one tunnel caved in, a highway bridge damaged, roads blocked by landslips and train services halted, media reported. Kumamoto airport was also closed.There have been more than 230 aftershocks of at least level 1 on the Japanese scale since Thursday's shock, said Japan's meteorological agency."We have already seen of several of the mid to upper 5 plus magnitude range, and over the next several days and weeks, we would not be surprised to see more earthquakes of this size," said John Bellini, a geophysicist with the U.S. Geological Survey (USGS).Japan is on the seismically active "ring of fire" around the Pacific Ocean and has building codes aimed at helping structures withstand earthquakes.A magnitude 9 quake in March 2011 north of Tokyo touched off a massive tsunami and nuclear meltdowns at Fukushima. Nearly 20,000 people were killed in the tsunamiBank of Japan Governor Haruhiko Kuroda, speaking at a G20 event in Washington, said it was too early to assess the economic impact but bank operations in Kumamoto were normal.Manufacturers including Honda, Renesas Electronics Corp and Sony halted production after the tremors but no major damage was reported.The 2011 quake temporarily crippled part of Japan's auto supply chain in particular, but some companies have since adjusted the industry's "Just in Time" production philosophy in a bid to limit any repeat of the disruption.