Blatter said he was stepping down mere four days after being re-elected to a fifth term. 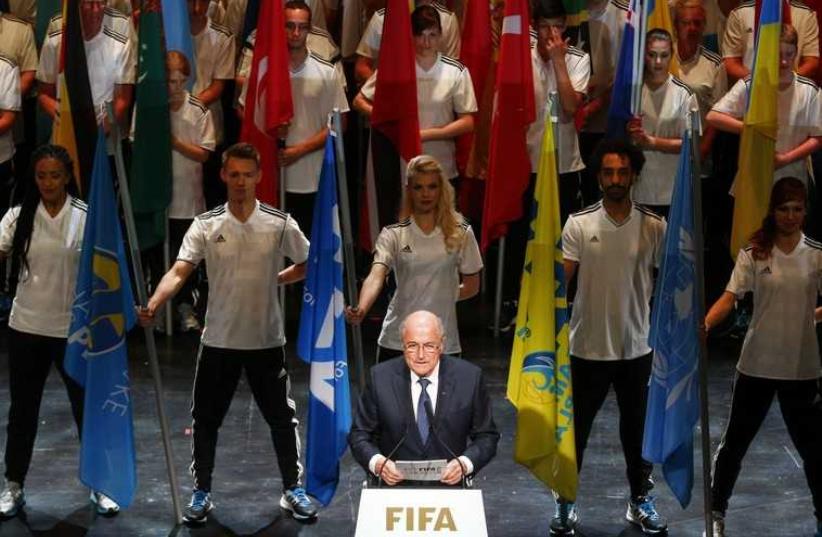 FIFA President Sepp Blatter speaks during the opening ceremony of the 65th FIFA Congress in Zurich, May 28
(photo credit: REUTERS)
Advertisement
ZURICH - Sepp Blatter resigned as FIFA president on Tuesday in the face of a US-led corruption investigation that has plunged world soccer's governing body into the worst crisis in its history.Blatter, 79, announced the decision at a news conference in Zurich, six days after the FBI raided a hotel in Zurich and arrested several FIFA officials just four days after he was re-elected to a fifth term as president.Blatter said an election to choose a new FIFA president would be held as soon as possible. "FIFA needs profound restructuring," he said.FIFA, ruled over by Blatter since 1998, was rocked this week by the announcement of a US investigation into alleged widespread financial wrongdoing stretching back for years. Swiss authorities mounted their own criminal probe into the award of the 2018 and 2022 World Cups to Russia and Qatar, respectively.The US Justice Department and Federal Bureau of Investigation did not immediately respond to requests for comment.Blatter initially attempted to bat away the furor, relying on his network of friends to hold onto power at FIFA, which he joined in 1975.While Blatter was not mentioned in either the US or Swiss investigations, there were widespread calls for him to quit, mostly from Western nations. Some major sponsors also expressed misgivings about the impact of the scandal.The investigation however closed in on Blatter on Tuesday, when FIFA was forced to deny that his right-hand man, Secretary-General Jerome Valcke, was implicated in a $10 million payment that lies at the heart of the US case.But at the same time, a letter addressed to Valcke was published outlining the transaction.Valcke, who has been secretary-general since 2007 and is seen as one of the most powerful men in world sport, had no role in the payments, which were authorized by the chairman of FIFA's Finance Committee, FIFA said in an earlier statement.The chairman of the committee at the time of the payments was Argentina's Julio Grondona, who died last year.A person familiar with the matter said on Monday that US prosecutors believe Valcke made the $10 million bank transactions which are central to a US bribery investigation against FIFA.