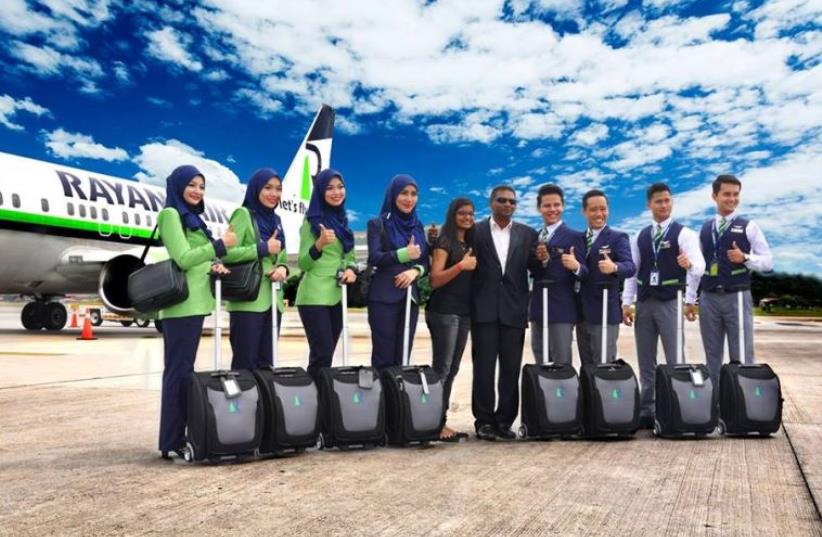 Rayani Air crew.
(photo credit: RAYANI AIR FACEBOOK)
Advertisement
A new strictly-Shari'a enforcing airline coined Rayani Air launched operations Sunday in Malaysia, with an inaugural domestic flight from capital Kuala Lampur to popular holiday destination Langkawi.In accordance with Shari'a law, the airline imposes a strict adherence to the tenets of Islamic law. Management prohibits alcohol consumption on board, serves food which is strictly halal, sounds Muslim prayers before take-off, and imposes a modest dress-code where Muslim-women employees must wear a hijab. Rayani Air's Managing Director, Jaafar Zamhari, told Malaysian news-station Astro Awani on Friday, "It is compulsory for our Muslim women cabin crew to wear hijab and for non-Muslim's to wear a decent uniform.""We also recite doa (prayers) before the departure of each flight, we have a 'no-alcohol' policy, and we provide food and beverages that are halal," he confirmed. The airline's routes are currently domestic, with an eye geared towards international expansion - particularly into the Middle East, where it aims to service pilgrims of the Umrah and Hajj. With a fleet of two Boeing aircraft currently in its rotation, Rayani Air is the latest - yet not the first - airline to operate under the influence of the Shari'a. It joins the ranks of Royal Brunei Airlines, Saudi Arabian Airlines, and Iran Air. And more are aspiring to join the newly-created "Shari'a airline" niche in the not-yet inundated international market. In October, Bloomberg reported on the impending rise of Firnas Airlines, a UK startup airline which was raising a capital of $50 million "through sharia-compliant means to fund its plans, with possible financiers in Iran, the United Arab Emirates and U.K."The airline would target London-based Muslims through its Shari'a-based offerings; It would be free of alcohol, serve strictly halal meat, use interest-free finance and offer a "a more upscale cabin product than available to many Islamic destinations" at a budget-friendly price.Set to launch in 2016, Firnas will service South Asia initially, before expanding into the Middle East.