The disease originated in the Middle East in 2012; So far, 41 cases have been documented in South Korea. 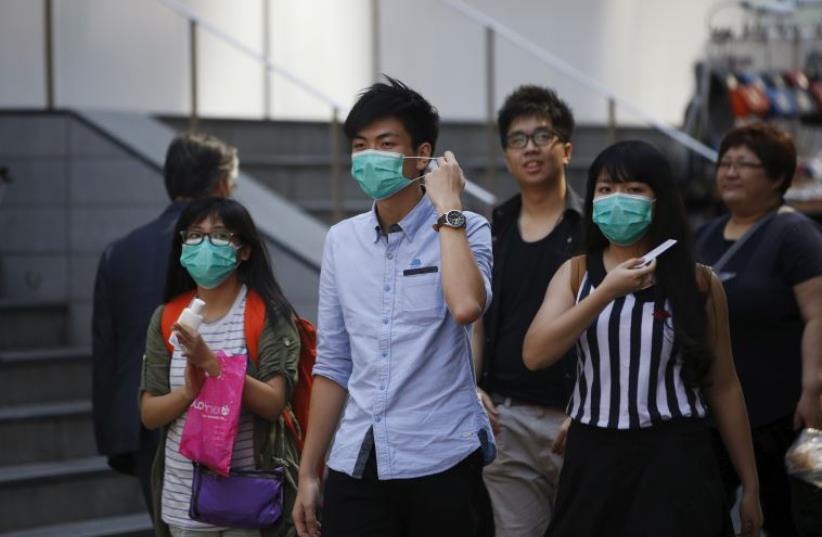 Tourists in Seoul, South Korea wear protective masks to prevent themselves from contracting Middle East Respiratory Syndrome (MERS)
(photo credit: REUTERS)
Advertisement
SEOUL - South Korean authorities squabbled on Friday over their handling of an outbreak of Middle East Respiratory Syndrome (MERS), as a fourth person died and five new cases were reported.The government has promised to do everything it can to end the outbreak which began in South Korea last month when an infected South Korean man brought it back from a business trip to the Middle East.With 41 cases, South Korea has the most infections outside the Middle East where the disease first appeared in 2012, and where most of the 440 fatalities have been.As the number of infections in South Korea rises daily, fear and anger are growing. South Korea's neighbors are also increasingly concerned.Memories are still fresh in Asia of Severe Acute Respiratory Syndrome (SARS), which emerged in 2002-2003 and killed about 800 people worldwide. MERS is caused by a coronavirus from the same family as the one that caused SARS.Health Minister Moon Hyung-pyo accused authorities in the capital, Seoul, of giving out incorrect information about a case which he said would spread alarm and undermine the fight against the disease.On Thursday, city officials accused national authorities of being slow to share information, in particular about a doctor who had treated a MERS patient and subsequently went to a May 30 gathering attended by more than 1,500 people.The doctor was later diagnosed with MERS and the people at the gathering have been advised to stay in voluntary quarantine.Moon rejected assertions his ministry had mishandled the case."The announcement by the city of Seoul yesterday has parts that are not factual and can increase public concern," he said.The comments would only hurt the credibility of the government's effort to stamp out MERS, he said.The most recent MERS patient to die was a 76-year-old man who had been in the same ward as other MERS patients and had been suffering from various ailments including cancer, the Health Ministry said.More than 1,000 schools have shut as fear has spread. Traffic has been light in parts of Seoul where schools are located and many people are wearing face masks on the streets.Bowing to public pressure, the Health Ministry released the name of the hospital where most of the cases have been diagnosed.The World Health Organization (WHO) has not recommended travel restrictions but thousands of people from mainland China, Hong Kong and Taiwan had cancelled trips to South Korea.Japan said it was looking into possible quarantine measures for people arriving from South Korea while medical institutions and the military were being told to get ready to respond.China last week reported its first case, that of a South Korean man who tested positive after breaking voluntary quarantine and travelling to Hong Kong and on to mainland China.Chinese media said health authorities had been told to step up vigilance, especially given that many Chinese Muslims would travel to the Middle East on pilgrimage later in the year.All of South Korea's cases have been traced to the man who visited Saudi Arabia and the United Arab Emirates, the countries with the most MERS cases.It took several days for the 68-year-old to be diagnosed, during which time he infected people at health facilities.Investigators at one facility he visited had found evidence of MERS in air conditioning filters, said preventive medicine expert Choi Bo-youl. Thirty of South Korea's cases had been linked to the facility, although experts say there are no reported cases of MERS transmission by air.MERS has a much higher death rate than SARS, at about 38 percent, according to WHO figures, but it does not spread as easily as SARS.South Korea's new cases bring the total number globally to about 1,185, based on WHO data, with at least 443 related deaths.