His remarks coincide with Conservative Prime Minister David Cameron's plans to bolster the powers of spies and police. 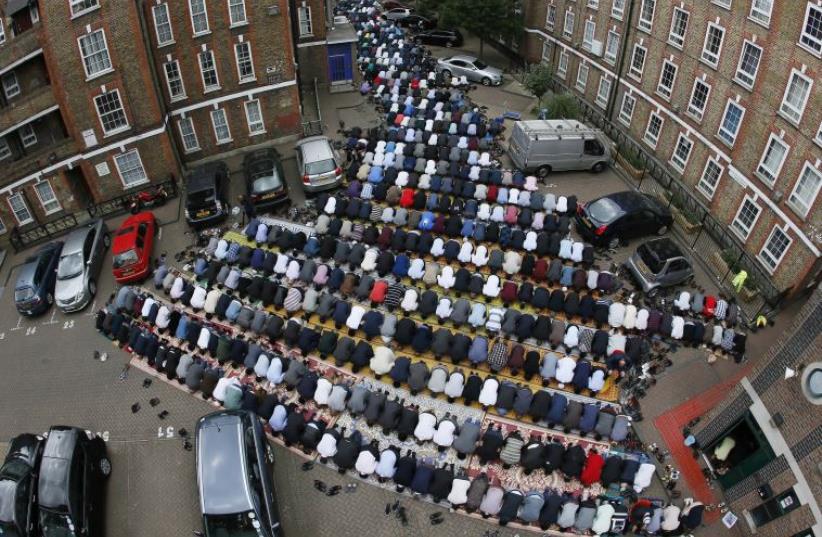 Muslims attend Friday prayers during the second day of Ramadan in east London
(photo credit: REUTERS)
Advertisement
Britain's domestic spy service chief said Islamist militants pose the biggest threat to the country that he had seen in his 32 years in intelligence, as he called for new digital surveillance powers to keep Britons safe.Andrew Parker, head of MI5, said again that militants are planning mass casualty attacks, and the threat was "on a scale and at a tempo that I have not seen before in my career," according to a transcript of a speech delivered on Wednesday.His remarks coincide with Conservative Prime Minister David Cameron's plans to bolster the powers of spies and police."[Islamic State] uses the full range of modern communications tools to spread its message of hate, and to inspire extremists, sometimes as young as their teens, to conduct attacks in whatever way they can," he said.Intelligence chiefs and Cameron have argued for years that the security agencies need more powers to address the threat and prevent another attack on the scale of the London suicide bombings in 2005 when four British Islamists killed 52 people.Opposition to more surveillance is widespread, including from within Cameron's Conservative party, fueled in part by former US spy contractor Edward Snowden who suggested US and British spies were conducting mass monitoring of communications.Privacy and human rights campaigners are also fiercely opposed to measures that they say are an assault on freedoms.The proposed new laws are expected to begin their passage through Britain's parliament next week.An effort in 2012 to beef up the reach of the security services was blocked by the Conservatives' then-coalition partners, the Liberal Democrats."I hope that the public debate will be a mature one...not characterized by ill-informed accusations of 'mass surveillance', or other such lazy two-worded tags," Parker said.Cameron now runs a majority government, which should allow him to pass the latest proposals. But there are questions over whether the upper chamber of parliament, where Cameron does not hold a majority, will try to get them watered down.Last August, Britain raised its terrorism threat level to "severe," the second highest category, which means an attack is considered highly likely. It was largely due to the danger the authorities say is posed by Islamic State fighters and the hundreds of Britons who have joined them.Parker said a growing proportion of online communications could not be intercepted by his agency and that service providers had "an ethical responsibility" to cooperate with security agencies.