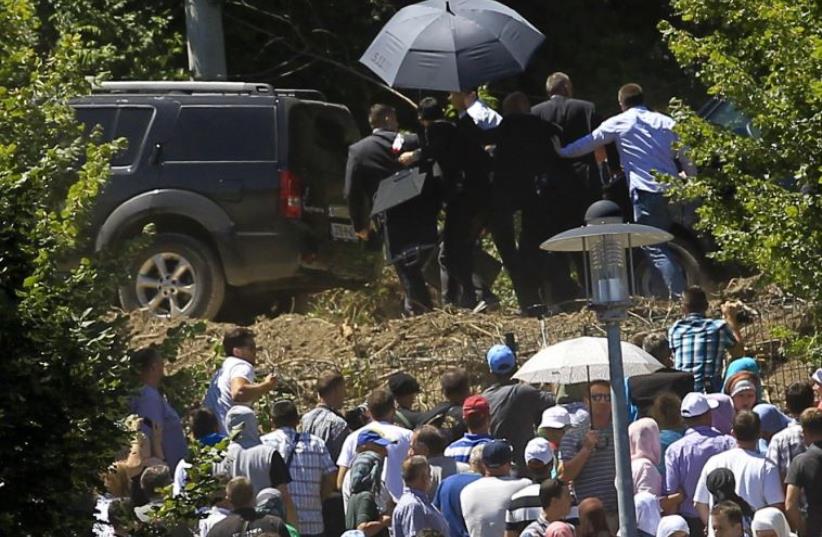 Bodyguards use umbrella to protect Serbia's Prime Minister Aleksandar Vucic
(photo credit: REUTERS)
Advertisement
POTOCARI, Bosnia - A mass burial marking the 20th anniversary of the Srebrenica massacre was marred on Saturday when a crowd of mourners chased Serbia's prime minister from the cemetery, underscoring the depth of anger over Belgrade's denial of the crime as genocide.Bodyguards whisked Aleksandar Vucic, a hardline nationalist during the Yugoslav wars of the 1990s, through a jostling crowd which shouted and booed. Some, throwing stones and bottles, surged up a hill behind his delegation as it ran for cover and left the site.Serbia condemned the incident as an "assassination attempt" and called an emergency cabinet meeting.Tens of thousands had gathered to commemorate the worst atrocity on European soil since World War Two, in which some 8,000 Muslim men and boys were massacred after the designated UN safe haven of Srebrenica fell to Bosnian Serb forces in the closing months of the 1992-95 war.Serbia had at the time backed the Bosnian Serbs with men and money.More than 1,000 victims have yet to be found. The remains of 136, their coffins draped in green cloth, were interred on Saturday.Vucic's attendance was intended to be symbolic of how far the region has come since the bloody collapse of Yugoslavia, but it came just days after his government enlisted ally Russia to veto a British-drafted resolution at the United Nations that would have condemned the denial of Srebrenica as genocide, as a UN court has ruled it was.Many Serbs dispute the term, the death toll and the official account of what went on, reflecting conflicting narratives about the Yugoslav wars that still feed political divisions and have stifled progress in Bosnia toward integration with western Europe.Only last month, Milorad Dodik, president of Bosnia's autonomous Serb Republic where Srebrenica is located, called the massacre "the greatest deception of the 20th century".SERBIAN PROTESTSerbia said it would send a protest note to Bosnia after Saturday's events. "This is a scandalous attack and I can say it can be seen as an assassination attempt," Serbian Interior Minister Nebojsa Stefanovic said on Serbian Pink television.Vucic was formerly a disciple of the "Greater Serbia" ideology behind much of the bloodshed that accompanied Yugoslavia's demise, in which at least 135,000 people died, 100,000 of them in Bosnia.For years he lionised Ratko Mladic, who as military commander of the Bosnian Serbs led the attack on Srebrenica and who is standing trial at the UN court in The Hague.Vucic has since rebranded himself as pro-Western, embracing the region's ambitions of joining the European Union."Look at him and look at those thousands of tombstones," said Hamida Dzanovic, who had come to bury two bones identified by DNA as those of her missing husband."Is he not ashamed to say that this was not genocide? Is he not ashamed to come here?" she asked. Recalling the last time she saw her husband, Dzanovic said: "I remember him returning twice to kiss our children, like he knew we would never see each other again."Since the massacre, the West has faced questions over how it allowed the fall of Srebrenica. Subsequent NATO air strikes forced the Serbs to the negotiating table and A US-brokered peace treaty ended the fighting, enshrining in Bosnia a complicated system of ethnic power-sharing that survives today.Representing the United States, Bill Clinton, US president at the time of the massacre, told those gathered: "I grieve that it took us so long ... I never want to see another killing field like this."