Among those wounded by bullets was a 13-year-old boy who Onofri said was in extremely critical condition. 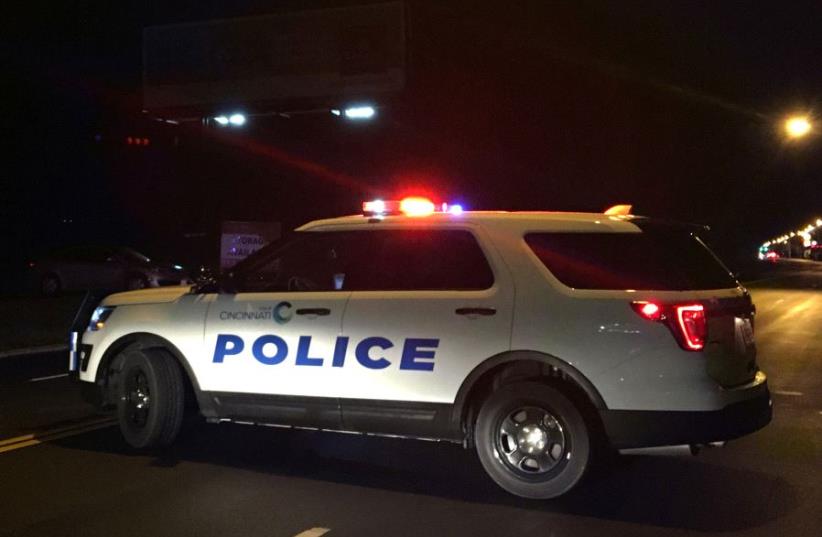 A police car blocks access to the scene of a mass shooting at the Cameo Nightlife club in Cincinatti, Ohio, US March 26, 2017.
(photo credit: REUTERS)
Advertisement
A suspected gunman was fatally shot after multiple people opened fire at an all-night arts festival in New Jersey, wounding 20 people including a boy who is in critical condition, authorities said on Sunday.Prosecutors said a 33-year-old man was killed and a second suspect arrested after gunfire erupted at 3 a.m. EDT (0700 GMT) at the event in the city of Trenton, about 60 miles (100 km) southwest of New York City."Preliminary investigation reveals that multiple individuals attending the Art All Night event opened fire within the venue. ... Multiple weapons have been recovered," Angelo Onofri, prosecutor for Mercer County, told a news conference.Among those wounded by bullets was a 13-year-old boy who Onofri said was in extremely critical condition. He said more than 1,000 people were believed to have been at the festival when the violence started."It absolutely could have been worse, given the confined space and the number of shots that appear to have been fired," Onofri said.Authorities are investigating whether the deceased suspect was killed by police or by gunfire from other suspects, he said.Organizers canceled the remainder of the event, billed as "24 hours of community, creativity and inspiration.""We're still processing much of this and we don't have many answers at this time but please know that our staff, our volunteers, our artists and musicians all seem to be healthy and accounted for," the organizers wrote on Facebook on Sunday. "Our sincere, heartfelt sympathies are with those who were injured."The New Jersey shooting occurs amid a debate about US gun laws that was given fresh impetus by the massacre in February of 17 people at a high school in Parkland, Florida."It is a fact that our cities as well as our suburbs throughout America are experiencing an increase in public shootings and public unrest such as this," Trenton Mayor Eric Jackson told the news conference. "This isn't just a random act of violence. This is a public health issue."