Ahmad al-Faqi is the first individual to face charges of damaging mankind's cultural heritage at the court. 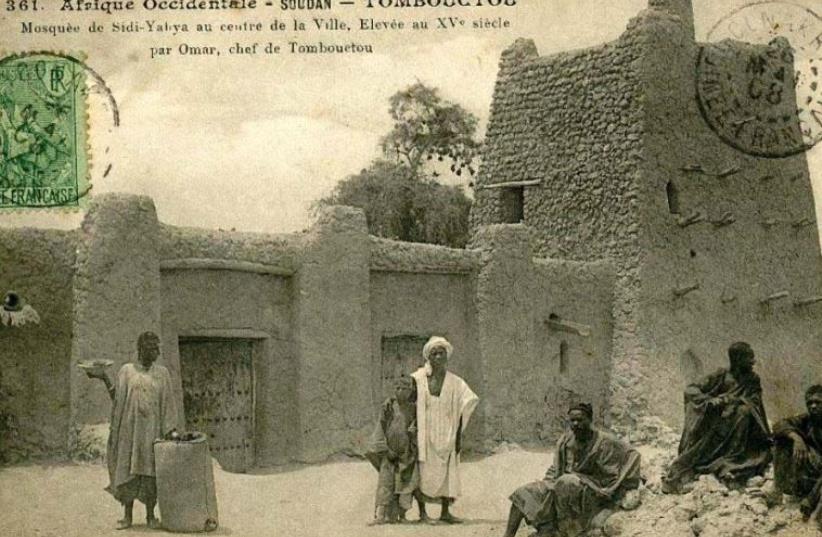 View of the Sidi Yahya Mosque in Timbuktu, Mali. Postcard published by Edmond Fortier showing the mosque in 1905-1906.
(photo credit: Wikimedia Commons)
Advertisement
AMSTERDAM - A suspected Islamist rebel accused of destroying ancient monuments in Mali's Timbuktu appeared before the International Criminal Court on Wednesday, the first person to face charges for damaging mankind's cultural heritage at the court.The ICC has been examining events in Mali since 2012, when Islamist Tuareg rebels seized large parts of the country's north and imposed strict Muslim religious law. They began desecrating ancient shrines, mosques and monuments in Timbuktu, now a UNESCO World Heritage Site.French and Malian troops pushed them back the following year.Prosecutors say that Malian citizen Ahmad al-Faqi al-Mahdi led an Islamist morality squad called al-Hesbah, which helped execute the decisions of the Islamic court of Timbuktu. They accuse him also of belonging to Ansar Dine, an ally of Al Qaeda in the Maghreb (AQIM)."My name is Ahmad al-Faqi a-Mahdi, and I am from the Tuareg tribe... I was born about 40 years ago. I am a graduate of the teachers' institute in Timbuktu and I was a civil servant in the education department... beginning in 2011," he told the court.Mahdi confirmed he was able to follow the proceedings via Arabic interpretation.As Hesbah leader, Mahdi is accused of directing attacks against nine mausoleums and the Sidi Yahia mosque in Timbuktu, a city which by the 14th century had become a major trading hub and center of learning.Mahdi is the first individual to face charges of damaging mankind's cultural heritage at the court, but the ICC has been urged to look at destruction wrought by the Islamic State on ancient site of Palmyra in Syria.Set up in 2002, the court is powerless to involve itself in some of the world's bloodiest conflicts when the countries at war are not members.Judge Cuno Tarfusser, presiding, set January 18 as the date for a confirmation of charges hearing, at which he would decide whether the evidence available was strong enough to merit a full trial.