Christmas markets opened across Germany on Monday at the start of the holiday season, fortified with security staff and concrete barriers to protect shoppers. 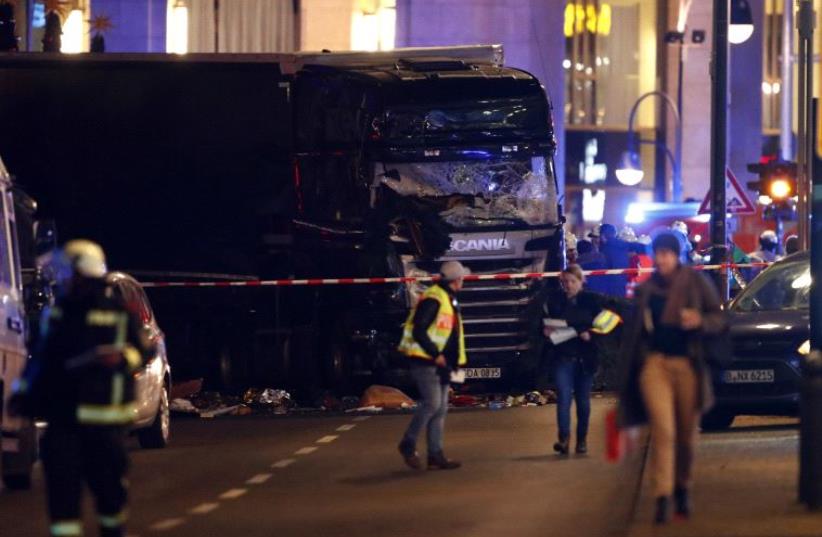 A truck plowed through a Christmas market in Berlin in December 2016, killing multiple people and injuring more.
(photo credit: REUTERS)
Advertisement
POTSDAM, Germany - German police on Friday secured a device full of wires and nails found near an outdoor Christmas market in the city of Potsdam, but, contrary to previous reports, could not establish whether it had contained explosives.Germany is on high alert for militant attacks, nearly a year after a Tunisian Islamist rammed a hijacked truck into a Christmas market in central Berlin, killing 11 people as well as the driver.Police evacuated a large area of Potsdam's old town center on Friday, including parts of the market, and closed stores while they investigated the package, which had been delivered to a pharmacy.Karl-Heinz Schroeter, interior minister of the state of Brandenburg, which surrounds Berlin, said the area would remain shut while police searched with sniffer dogs for any other similar packages.He told reporters that several hundred grams of nails had been found in a metal cylinder inside the package, but added: "We just don't know at this point if this was a device that could have actually exploded, or a fake, or a test."A robot using water jets was used to ensure the device was safe, officials said.Potsdam police said X-rays had shown wires, nails and batteries inside the package, but that no detonator had been found.Christmas markets opened across Germany on Monday at the start of the holiday season, fortified with concrete barriers and security staff to protect shoppers.Germany has around 2,600 such markets, filled with sparkling Christmas trees and wooden stalls serving candied nuts, sausages, mulled wine and handicrafts.Interior Minister Thomas de Maiziere said this week that Germany had increased information-sharing between federal and state officials and taken other steps to increase security after a series of missteps in the Berlin case.A ministry spokesman said this week that the risk of an attack in Germany and Europe remained high.