The annual kitsch-fest was watched last year by more than 195 million people in 45 countries. 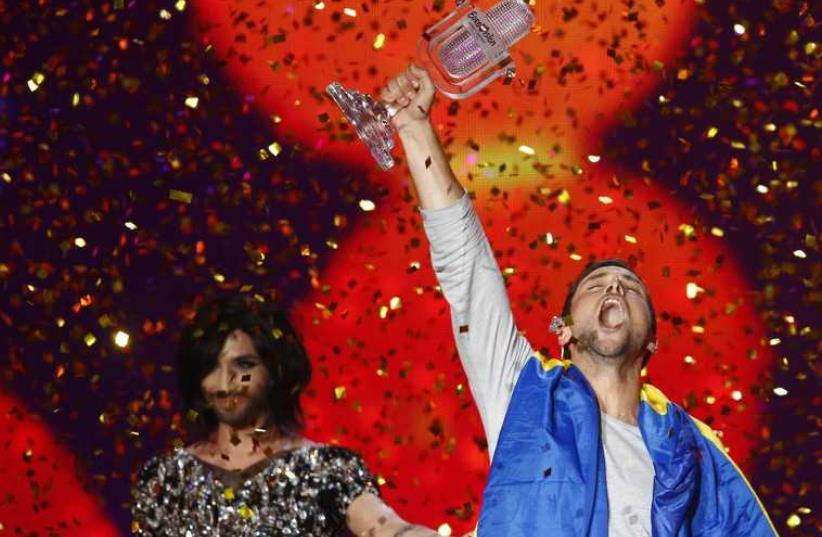 Singer Mans Zelmerloew representing Sweden celebrates winning the final of the 60th annual Eurovision Song Contest in Vienna, Austria May 23
(photo credit: REUTERS)
Advertisement
VIENNA - Sweden's Mans Zelmerlow won the final of the Eurovision Song Contest in Vienna on Sunday, beating Russia and Italy in the world's biggest international music show.The 28-year-old singer and TV presenter, who had been a bookmakers' favorite, performed the winning electro-pop ballad "Heroes," dancing in front of a black screen with animated gnomes.Sweden has won the 60-year-old competition six times, more than any other nation apart from Ireland. Sweden won most recently in 2012 with "Euphoria" by Loreen and now gets to host the contest again next year.Israel's 16-year-old Nadav Guedj ranked ninth with his super-poppy track "Golden Boy."This year's theme was Building Bridges, which many artists interpreted as an appeal for tolerance in performances that included a gay kiss scene by Lithuania."We are all heroes no matter who we love, who we are or what we believe in," Zelmerlow told the crowd in Vienna after getting a hug from last year's victor, bearded drag queen Conchita Wurst of Austria.He beat Russia's Polina Gagarina, whose song "A Million Voices" reaped top scores from most former Soviet satellite states that earned angry jeers from the crowd in Austria."Please remember that our motto is building bridges and that music should stand over politics tonight," presenter Alice Tumler told the audience.The annual kitsch-fest was watched last year by more than 195 million people in 45 countries, or more viewers than the Super Bowl.This year China broadcast the world's longest running music competition, a fixture in the gay calendar, live for the first time.While viewers are often puzzled by the inclusion of countries outside Europe such as Israel, which qualifies thanks to membership of the European Broadcasting Union (EBU), this year the net was cast even wider.To mark 60 years since the first Eurovision in 1955, Australia was given a wild card entry and singer Guy Sebastian and his up-tempo song "Tonight Again," a big hit with the crowds in Austria, finished fifth.Eurovision is hugely popular in Australia, where about 3 million people watched it last year, and broadcaster SBS is an associate member of the EBU.Recent hosts have spent an average of 25 million euros ($27.54 million) on staging the event. But EBU media director Jean Philip de Tender said it was possible to host it for 11 million euros, allowing the host nation to breakeven, meaning even small or cash-strapped countries have a chance.