By REUTERS
Candles lit at Mandela's funeral 370
(photo credit: REUTERS/Odd Andersen/Pool)
Advertisement
QUNU, South Africa - South Africa held a state funeral for Nelson Mandela on Sunday, closing one chapter in its tortured history and opening another in which the multi-racial democracy he founded will have to discover if it can thrive without its central pillar.The Nobel peace laureate, who suffered 27 years in apartheid prisons before emerging to preach forgiveness and reconciliation, will be laid to rest after a state funeral mixing military pomp with the traditional rites of his Xhosa abaThembu clan. 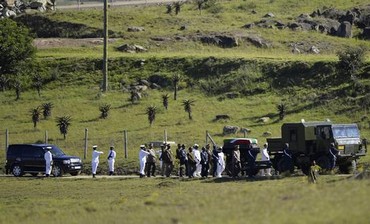 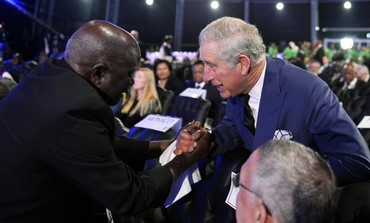 Fellow anti-apartheid veteran Archbishop Desmond Tutu was also among those arriving shortly after dawn at a vast, domed tent erected in a field near Mandela's home, having resolved a last-minute mix-up over his invitation."The person who is lying here is South Africa's greatest son," Cyril Ramaphosa, deputy leader of South Africa's ruling ANC party who was acting as one of the masters of ceremonies, said as the service got under way.As Mandela's flag-draped coffin was borne from the house on a gun-carriage, a battery of cannons positioned on the hillside fired a 21-gun salute, sending booms echoing across the sun-drenched valley.The coffin was followed into the huge tent, decked out inside in black, by Mandela's grandson and heir, Mandla, and South African President Jacob Zuma.It was then placed on black and white Nguni cattle skins in front of a ring of 95 candles as the service started with a choir singing Nkosi Sikelel' iAfrika, the evocative national anthem adopted after the end of apartheid in 1994.Mandela died in Johannesburg on December 5 aged 95, plunging his 53 million countrymen and millions more around the world into grief, and triggering more than a week of official memorials to the nation's first black president."It is the end of 95 glorious years of a freedom fighter, a dedicated and humble servant of the people of South Africa," Zuma said in his eulogy at the funeral ceremony."Whilst the long walk to freedom has ended in the physical sense, our own journey continues. We have to continue building the type of society you worked tirelessly to construct. We have to take the legacy forward," he said.As many as 100,000 people paid their respects in person to his lying in state at the Union Buildings in Pretoria, where he was inaugurated as president in 1994, an event that brought the curtain down on more than three centuries of white domination.When his body arrived on Saturday at his ancestral home in Qunu, 700 km (450 miles) south of Johannesburg, it was greeted by ululating locals overjoyed that Madiba, the clan name by which he was affectionately known, had "come home".'Man of the people'Across the nation, people watched on television or listened to the radio. In some locations, big screens transmitted the event live."Qunu is too far to go, so I gathered with some people here so we can mourn together. I can say he is a hero, a man of the people," said 29-year-old Message Sibanda, among about 100 others watching in Johannesburg's Sandton financial district.At the service, friends, family and African leaders paid moving tributes to the father of the "Rainbow Nation"."We may be drowned in sorrow and grief but we must be proud and grateful that after the long walk paved with obstacles and suffering we can salute you as a fighter for freedom," said lifelong friend and fellow Robben Island inmate Ahmed Kathrada."Farewell my dear brother, my mentor, my leader," he said, his voice cracking with emotion, and drawing tears from many mourners.Ethiopian Prime Minister Hailemariam Desalegn gave thanks for Mandela's contribution to Africa's liberation struggles."Madiba's life was the mirror of the continent, for the liberation of which he so relentlessly fought. Africa is forever indebted to him for that," he said.'Don't call me'Mandela served just one term as leader of Africa's biggest and most sophisticated economy, and formally withdrew from public life in 2004, famously telling reporters at the end of a farewell news conference: "Don't call me, I'll call you."His last appearance in public was at the 2010 World Cup final in Johannesburg's Soccer City stadium, waving to fans from the back of a golf cart.Yet such was his influence as the architect two decades ago of the historic reconciliation between blacks and whites that his passing has left a gaping hole in the heart of South Africa.With an eye on elections in five months, the ruling African National Congress (ANC), the 101-year-old former liberation movement Mandela once led, has seized on his death as a chance to shore up popularity that is ebbing even in its black support base.The strategy has not been without its risks, not least because it has highlighted the gulf in stature between South Africa's first black president and its fourth, the scandal-plagued Jacob Zuma.It backfired spectacularly at a mass Mandela memorial at Soccer City on Tuesday when Zuma, under fire for a $21 million security upgrade to his private home, was booed and jeered in front of world leaders including US President Barack Obama.Barring an upset next year, Zuma looks set for another five years in office, during which he will have to address an economy struggling to shake off a 2009 recession and the fragmentation of a vital ANC alliance forged with the unions in the common struggle against apartheid.With unemployment at 25 percent and racial inequality still painfully evident - the average white household earns six times more than the average black one - pressure for radical economic transformation is only likely to increase.Against that backdrop, the party is desperate for strong and decisive leaders to guide South Africa through the next 20 years, navigating the myriad complexities of the 21st century global economy and allowing it to claim what it believes is its rightful place at the world's top table.Both inside and outside the party, there are doubts whether Zuma, a polygamous Zulu traditionalist with no formal education, is the right man for the job."We need to raise the level of leadership," former president Thabo Mbeki, who was unceremoniously ousted by Zuma as ANC leader six years ago, said in eulogies to Mandela last week."The transformation of South Africa is a very difficult task, I think in many respects more difficult than the struggle to end the system of apartheid."