Police also find a lot of materials which can be used to make bombs. 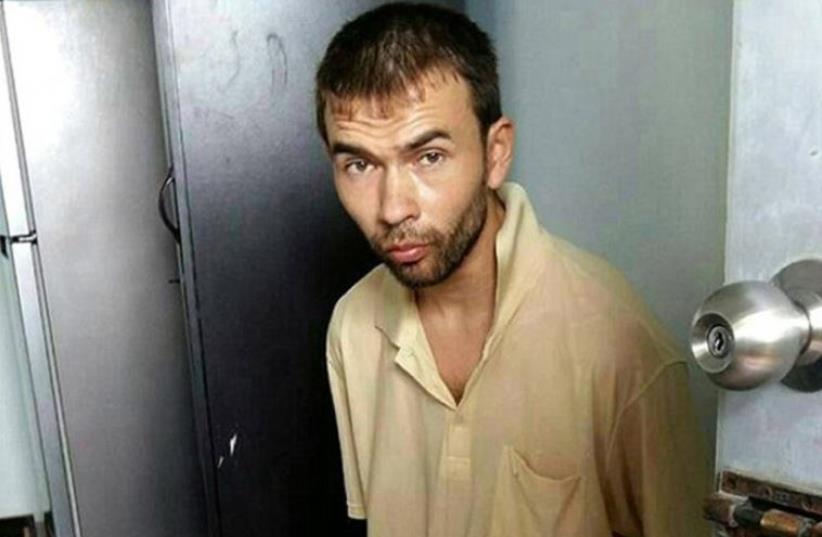 Suspect arrested by Thai police in connection to the August 17 bombing in Bangkok that killed 20 people.
(photo credit: ROYAL THAI POLICE)
Advertisement
Police hunting for the perpetrators of Thailand's deadliest bombing arrested a foreign man on Saturday they said fitted the description of a suspect seen leaving a rucksack at the site of the Bangkok blast nearly two weeks ago.Police raided an apartment in a northern suburb of the capital on Saturday afternoon and discovered possible bomb-making materials that could have been used in the Aug. 17 attack in Bangkok's bustling commercial heart.Police would not confirm where the suspect was from but said he was a foreign national and would be charged initially with possession of illegal explosive materials and held at a military facility.The bomb tore through the crowded Erawan Shrine, one of the country's top tourist attractions and close to high-end hotels and malls, killing 20 people and wounding scores more.Among the dead were 14 foreigners, including seven from mainland China and Hong Kong, in an attack the military government said was intended to be a strike at Thailand's troubled economy.The suspect "looks like the one we are looking for", said national police spokesman Prawut Thavornsiri."They also found a lot of materials which can be used to make bombs."The prime suspect in the attack is a young man with shaggy dark hair dressed in a yellow shirt seen on grainy closed-circuit television footage dropping off a backpack and casually leaving the scene before the bomb went off.Thai television showed a photograph of a handcuffed man in his 20s, shabbily dressed with a beard and hair shaven short. Reuters could not immediately verify the authenticity of the image.Several channels also showed an image of a passport they said was seized at the apartment where the man was arrested during the raid.It appeared to be a Turkish passport, belonging to a man born in 1987. Reuters could not confirm whether or not it belonged to the suspect, or if it was found by police at the apartment.Police and military personnel cordoned off the brown-colored four-story budget apartment on Saturday from scores of media and onlookers, and the arrested man could not be seen, a Reuters photographer said.Police had made little progress in the investigation, and authorities had offered a $85,000 reward for information leading to the arrest of the main suspect.Officials have had different theories about the identity of the man, saying he could be foreign, or a Thai man pretending to be foreign.Police have been criticized for providing contradictory information, and Reuters reporters on Friday found the authorities had not checked some CCTV footage taken minutes after the blast, which featured a man dressed like the chief suspect.