McCartney wrote the 1968 hit to console John Lennon's son, Julian Lennon, after the divorce of the boy's parents, and was originally titled "Hey Jules".

By ALEX WINSTON
A wooden stage from the Liverpool venue where the Beatles performed before they became famous, with a pair of pants worn by John Lennon, a guitar played by Paul McCartney and a bass drumhead printed with The Beatles' logo
(photo credit: REUTERS/JANE ROSS)
Advertisement
Sir Paul McCartney’s handwritten lyrics to The Beatles’ song "Hey Jude" sold for $910,000 (£731,000), according to US auction house Julien’s Auctions.The vast sum is approximately six times the original estimate.McCartney wrote the 1968 hit to console John Lennon's son, Julian Lennon, after the divorce of the boy's parents, originally titled "Hey Jules". 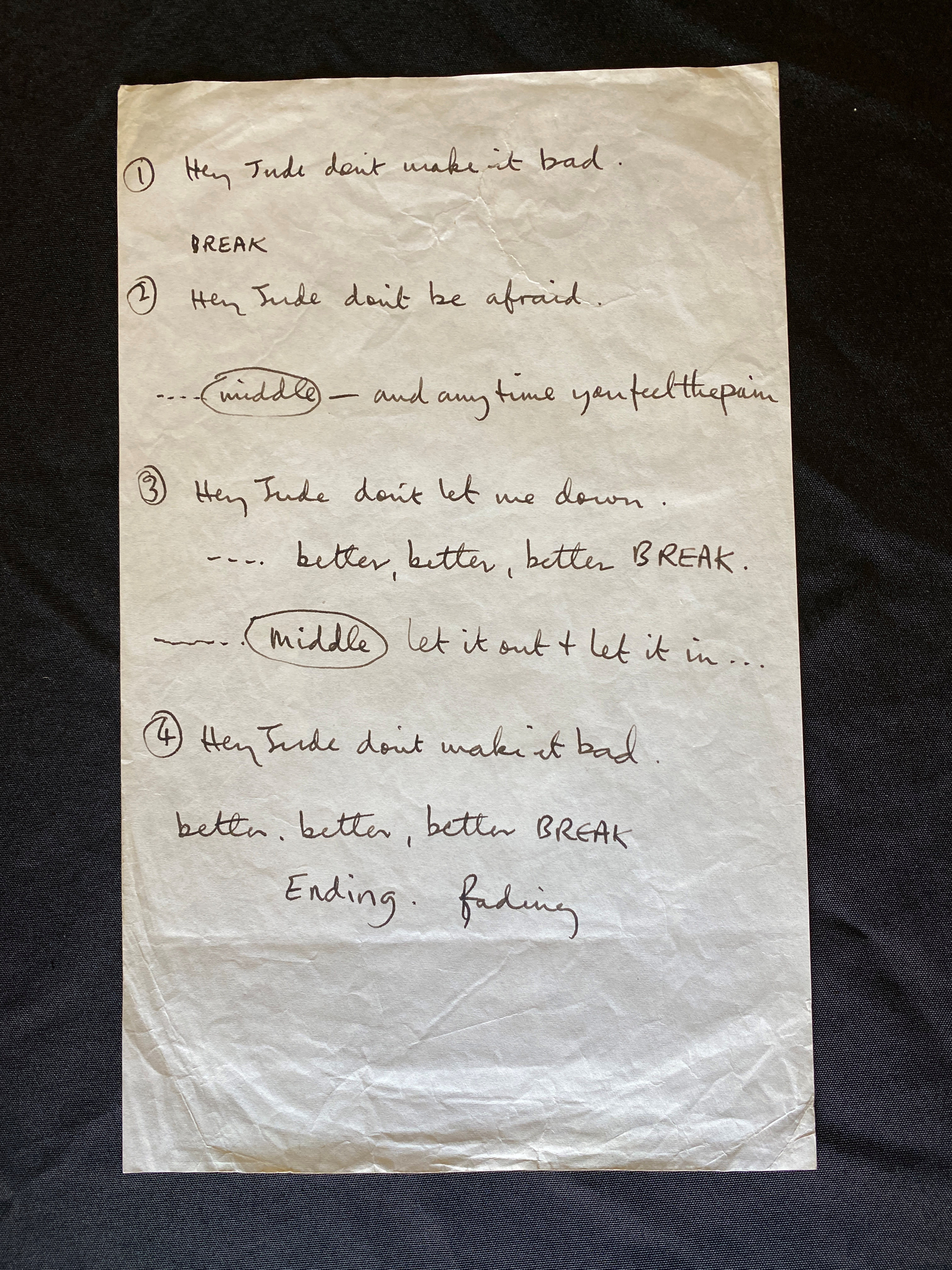 A sheet of paper with partial "Hey Jude" lyrics, written by Paul McCartney for a recording session in 1968, is displayed in a Julien's Auctions warehouse in Torrence, California, U.S. March 5, 2020 (Photo Credit: Reuters/Jane Ross)Before the sale, Julien’s Auctions music specialist Jason Watkins described McCartney’s scribbled notes for a studio recording of Hey Jude as a very rare and valuable piece of music history, British daily The Guardian reported.“It’s obviously a very iconic song that everyone’s familiar with,” said Watkins. “These handwritten lyrics were used in the studio as a guide when they were recording it.”"Hey Jude" topped record charts around the world and was the best-selling single of 1968 in the UK, the US, Australia and Canada.The item sold on Friday as part of Julien's Auctions "The Beatles auction," where nearly 250 items were sold to coincide with the 50th anniversary of the band's breakup.These included guitars, rare vinyl and autographed items.A bass drum head used in the opening concert of the band's first North American tour in 1964 fetched $200,000, and a drawing by John Lennon and second wife Yoko Ono called "Bagism" sold for $93,750.The wooden stage of the Liverpool venue where the band performed sold for $25,600.The sale had been due to take place at the Hard Rock Café in Times Square, New York, as well as online, but it was made into an online-only auction due to the coronavirus pandemic, the auction house said.