The new face of Europe living under siege from terror

Reporters Notebook: Soldiers on the streets of Florence. 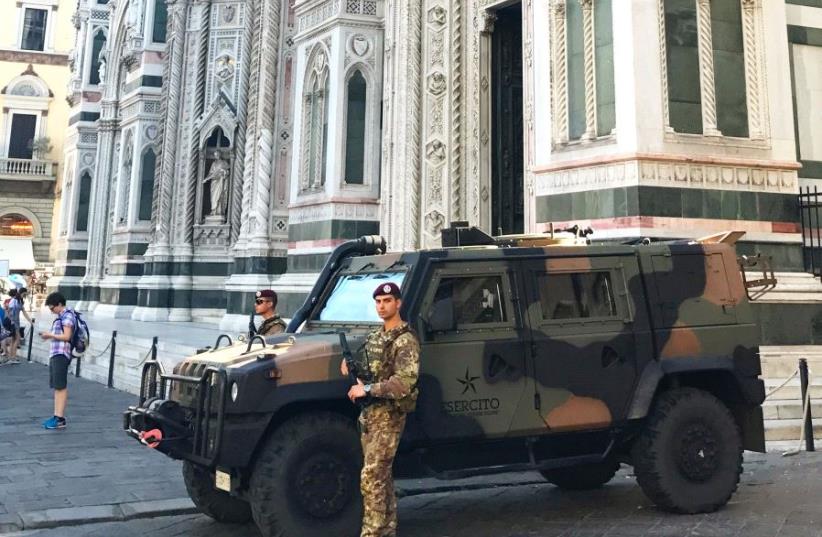 Italian army deployed next to the Duomo Cathedral in Florence on June 20
(photo credit: SETH J. FRANTZMAN)
Advertisement
Camouflaged soldiers patrolling airports no longer seem out of place in Europe. While I waited in the seemingly endless line to rent a car from Hertz at Milan’s Malpensa airport two Italian soldiers marched back and forth near double doors that connect the airport to a parking lot. They made the “Sicily by car” rental place seem a bit disconcerting. Their Baretta AR70/90 rifles, which are almost a meter in length, looked incongruously long and bulky in the closed spaces of the airport.The heavy security presence is necessary. In March a 39-year old French citizen attacked soldiers at Paris Orly Airport. Terror attacks and raids on plotters have become a near daily occurrence throughout Europe in the last year. From Berlin to Paris, Stockholm, Manchester and London, attacks have killed dozens. In the week and a half I spent in Italy this June, a man rammed police officers in Paris on June 19th and the next day there was an explosion at the Brussels Central station.Italy has been an island of relative peace in the terror storm. That was not always the case. Between 1969 and 1980 right wing fascist groups killed more than 100 people in bombings. In 1982 Palestinians terrorists attacked the Great Synagogue of Rome. In recent years Italian security services have warned other European countries about extremists. Youssef Zaghba, one of the London bridge attackers, was under investigation in Italy and Italians warned the UK about him. Anis Amri, who carried out the Berlin truck ramming, was killed by police in Milan.I studied in Florence in 2001 and there was security presence back then, however things have changed greatly in almost two decades. In the early 2000s the sight of Carabinieri, a military police unit, was common in Italian cities and towns. Some of them carried machine guns, but their uniforms and appearance was more like police than military.  Today the 15th century Duomo Cathedral, Florence’s most iconic and massive church with the famous Brunelleschi dome, is guarded by two army soldiers in green camo with short barreled Beretta ARX 160 rifles. They stand guard next to an armored jeep. Since ISIS-inspired terrorists have targeted churches in France and other Christian-themed events, including art galleries like the Louvre, their presence at Florence’s most important tourist site makes sense. Down the street at the Uffizi Gallery more soldiers were on patrol.  At the Santa Maria Novella  train station in Florence another armored jeep and soldier was parked at the entrance to the foyer.The presence of armed soldiers on the streets of Florence may be a symbol of this year’s terror threat in Europe, but it certainly is not unique historically. Florence was the center of warfare in Italy from the 13th to 15th centuries, when warring cities and armed factions like the Guelphs and Ghibellines ravaged the countryside. Niccolo Machiavelli would have found it normal. “There cannot be good laws without good armies and where there are good laws there must be good arms,” he wrote in The Prince in 1513.