Mohamed Merah's older brother, Abdelkader, has been remanded in custody since the attacks that killed seven people in 2012.

By EYTAN HALON
OCTOBER 3, 2017 11:49
Mohamed Merah
(photo credit: REUTERS/FRANCE 2 TELEVISION/HANDOUT)
Advertisement
More than five years after Mohamed Merah carried out a horrific shooting rampage in the south of France, including a deadly attack at Toulouse's Ozar Hatorah Jewish day school, two men accused of assisting him have gone on trial in Paris.The trial, which opened on Monday and is expected to last approximately one month, is the first time that a French court will judge individuals suspected of responsibility in a jihadist massacre.Merah's older brother, Abdelkader, has been remanded in custody since the attacks that killed seven people and is accused of supporting and radicalizing his brother, as well as providing logistical assistance to the would-be terrorist. Despite admitting to having been present when the scooter used during the attacks was stolen, Abdelkadar denies any role in the attack and any knowledge of the scooter's intended use. If convicted, Abdelkadar is likely to receive a life sentence. A family friend, Fettah Malki, is also standing trial for acquiring a submachine gun and bulletproof vest for the attack. Malki faces up to 20 years in prison if convicted.Judge Franck Zientara warned those present in the courtroom: "The facts that we are going to have to consider are terrible." Dozens of witnesses and experts are due to testify in the coming weeks.During a shooting spree and manhunt that lasted nearly two weeks in March 2012, Merah shot dead three French soldiers and four civilians, including three young children, at Ozar Hatorah Jewish day school. Five others were wounded in the attacks. Merah, who filmed the attacks on a GoPro camera fixed to his helmet, was shot dead on March 22, 2012 following a 32-hour standoff with French special police forces. Emotions were high as the trial commenced. Outside the courtroom, Zoulika Aziri, the mother of the Merah brothers, condemned her dead son's actions but defended the innocence of Abdelkader."The truth, I cry for my son, I cry for the victims, for the families, the girls, the boys, for the people who died... That's not what Islam is about," Aziri said. "I'm sorry about what Mohamed did, but Abdelkader had nothing to do with that." 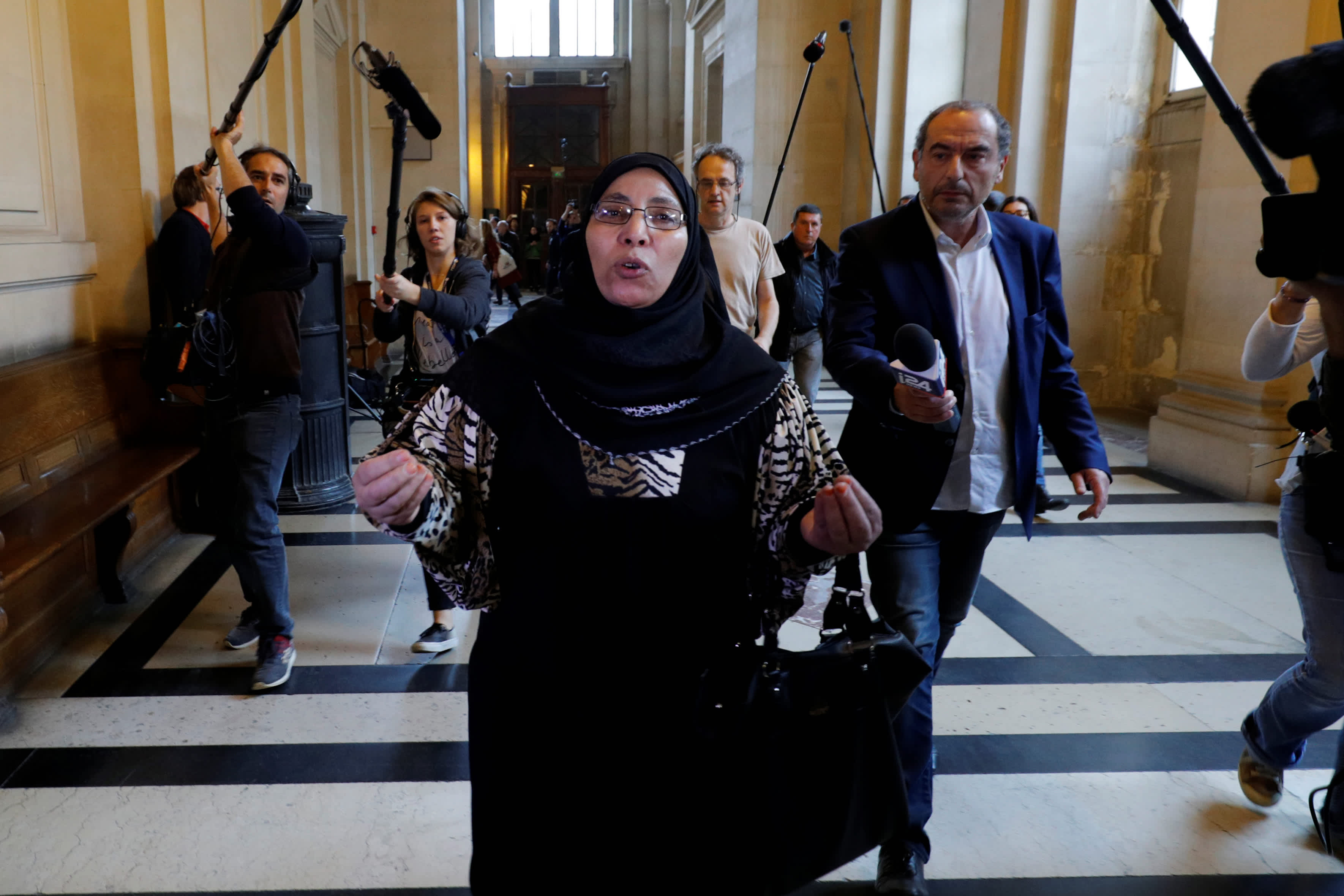 Zoulikha Aziri, the mother of gunman Islamist militant Mohammed Merah, leaves during the trial of her son Abdelkader Merah, who stands accused of complicity in the shootings , at the courthouse in Paris, France, October 2, 2017. (Reuters)Aziri, who blew a kiss to her son as she briefly took to the witness stand, was jeered in the courtroom by Samuel Sandler, whose son Jonathan and grandchildren Arieh and Gabriel were killed at the Ozar Hatorah school. Aziri will testify to the court later in the trial.A third Merah brother, Abdelghani, will also give evidence. Long-estranged from the family, Abdelghani has been vocal in his condemnation of his brothers. In an interview with FranceInter radio on Monday, Abdelghani said: "In the Merah family, there was always fertile ground for hate... Our parents attempted to educate us to bypass the post-colonial trauma between France and Algeria, hatred for Jews, conspiracies... but Mohamed Merah, he bathed in all that. He was a bomb and Salafists were the detonator.""When my mother says that it was the police who killed her son, I want to tell her: No, the police neutralized him," he added. "He was an angry dog, they did a good deed for society... he has dishonored Islam, he has tarnished the image of Islam."Among those also expected to take to the stand is one of the soldiers wounded by Merah. Due to testify via video-link from hospital, Loic Liber was left tetraplegic after being severely wounded by Merah in an attack that killed two fellow soldiers in Montauban.Since the horrors committed by Merah in March 2012, France has battled a severe increase in Islamist and antisemitic terror. Attacks at the office of Charlie Hebdo, the Hypercacher kosher market, Bataclan and Bastille Day celebrations in Nice have claimed hundreds of lives alone. On Sunday, French soldiers shot dead a man after he stabbed two women to death in the southern city of Marseille. Police sources said the attacker shouted "Allahu Akbar" as he carried out the attack.