Trump laughed off a question by a local man at a New Hampshire rally about how he intends to get rid of Muslims, saying he was "looking into a lot of different things." 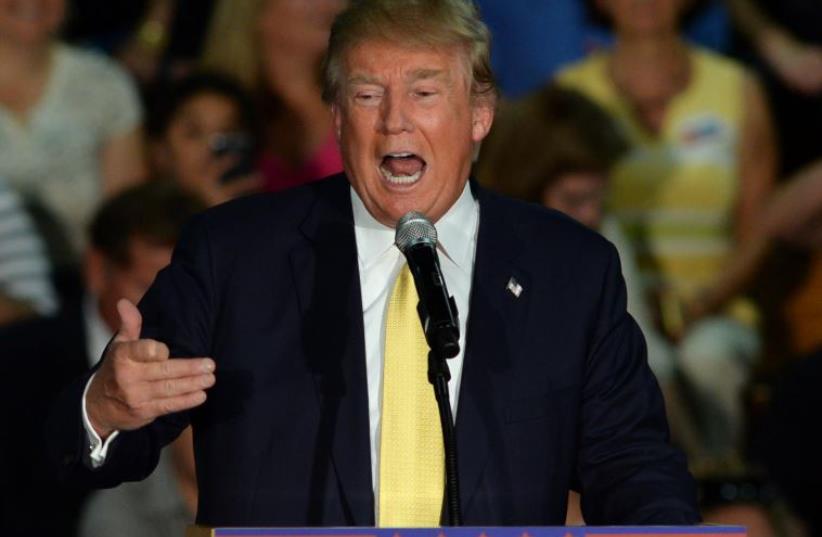 Republican Presidential candidate Donald Trump speaks during a town hall event at Rochester Recreational Arena September 17, 2015 in Rochester, New Hampshire.
(photo credit: DARREN MCCOLLESTER/GETTY IMAGES/AFP)
Advertisement
Notoriously outspoken and unabashed presidential hopeful Donald Trump came under fire on Thursday for his cavalier response to a question on how to "get rid of Muslims," CNN reported. "We have a problem in this country. It's called Muslims," said a local man at a town hall rally in Rochester, New Hampshire. "You know our current president is one. You know he's not even an American." Trump, seemingly caught off guard by the question, joked "We need this question, this is the first one." The man, proudly displaying a Donald Trump T-shirt, continued. "We have training camps where they [Muslims] want to kill us.  That's my question. When can we get rid of them?"The brazen business mogul responded to the question by assuring the potential voter that "we are going to be looking into a lot of different things." "You know, a lot of people are saying that, and a lot of people are saying bad things are happening. We will be looking at that and many other things," he continued, before taking another question. Many Democrats were upset by Trump's comments, including Democratic party front-runner Hillary Clinton, who Tweeted on Thursday that Trump's "hateful rhetoric about Muslims is disturbing, and just plain wrong."


Democratic National Committee Chairwoman and Jewish politician Debbie Wasserman Schultz also bashed Trump's choice of words, saying "Donald Trump's racism knows no bounds. This is certainly horrendous but unfortunately unsurprising given what we have seen already." The topic quickly went viral on social media, and many took to Twitter to criticize Trump's candor.

#DonaldTrump just agreed with audience question about #Muslims. I am sickened. He had a chance to show decency ; didn't. Basically agreed
— HyltonHylton (@HyltonHylton123) September 17, 2015

Who's next? #donaldtrump has demonized women, Hispanics, Muslims and others. Who's next? We are Americans. We deserve better. #DumpTrump
— Donna Brazile (@donnabrazile) September 18, 2015