US billionaire still tops Republican field with 35 percent but many Republicans say he hurt his chances of becoming president. 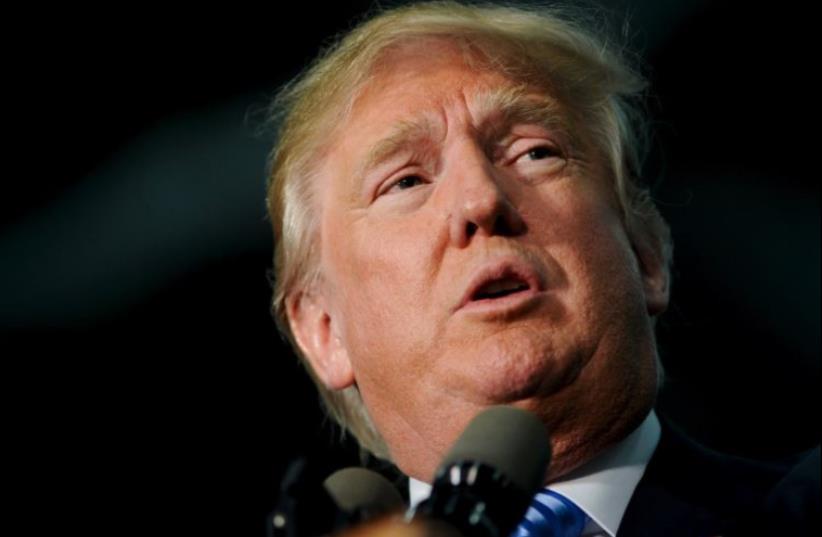 Donald Trump.
(photo credit: REUTERS)
Advertisement
WASHINGTON/NEW YORK - Donald Trump held onto his commanding lead in the Republican race for the White House after his call for a ban on Muslims entering the United States was condemned worldwide, according to a Reuters/Ipsos poll, the first national survey conducted entirely after the billionaire's remarks.Trump led the pack of candidates seeking the Republican Party's nomination in the 2016 election with 35 percent of support from Republican voters, the opinion poll released on Friday found, the same lead he held before Monday, when he said Muslim immigrants, students and other travelers should be barred from entering the country.Most Republican voters said they were not bothered by his remarks, though many said the comments could still hurt Trump's chances of becoming president. Twenty-nine percent of Republicans, who will pick the party's nominee for the November 2016 election, said they found Trump's remarks offensive against 64 percent who did not."He's really saying what everybody else is feeling," said Donna Fee, 57, a personal caregiver from Missouri. Fee, a Republican, said she supports Trump and agreed with his proposal to bar Muslims. But she said his bluntness could hurt him with other voters."I really think he needs somebody to calm him down, you know. I really think he needs to learn to use a filter."Still, in a sign of how Trump's rhetoric has polarized the electorate, 72 percent of Democrats and 47 percent of voters overall said they were offended by Trump's comments.Forty-one percent of Republicans polled said Trump's remarks could hurt his chances of becoming president; that figure was higher among all respondents.Retired neurosurgeon Ben Carson came in second among Republicans with 12 percent in the Reuters/Ipsos poll, and US Senator Ted Cruz of Texas and former Florida Governor Jeb Bush tied with 10 percent.Trump's statement was by far the most dramatic response of a US presidential candidate to last week's shooting spree in California by a married couple whom the FBI later said had become Islamist militants some time ago.Leaders in Britain, France, Israel and Canada denounced him, and the fallout hurt the real estate mogul's global brand. A Dubai firm building a $6 billion golf complex stripped Trump's name from the property.But Trump's standing in opinion polls of Republican voters was unchanged in the data released on Friday, which covered responses from Dec. 8-11. He had more than double the support of his nearest rivals in the online poll of 481 Republicans. The poll had a credibility interval, a measure of accuracy, of 5 percentage points."He said stop letting them in temporarily until Homeland Security...can get a hold of what in the heck is going on and give us a little more protection," said Ardith Forrest, 76, of Georgia. She agreed with Trump's proposal. "Americans don't seem to understand what danger is."Alan Abramowitz, a political science professor at Emory University, said Trump's comments on Muslims were not that different from previous statements, pointing to Trump's idea to establish a registry of Muslims in the United States as an example."There's clearly a large segment of the Republican electoral base that responds very positively to the things Trump has been saying," Abramowitz said.