Wrapping up trip, Trump says Abbas and Netanyahu are committed to peace

"Israeli Prime Minister Benjamin Netanyahu assured me that he too was ready to reach for peace. He's a friend of mine and he means it," Trump tells troops in Sicily. 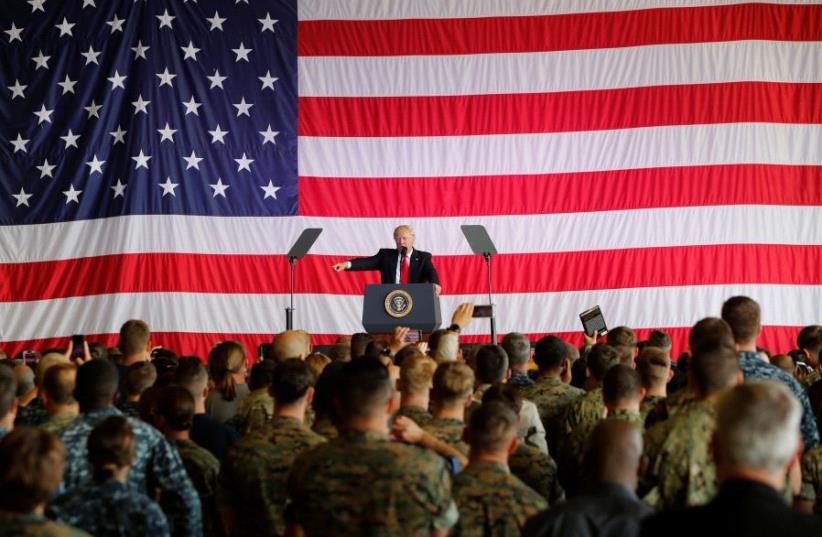 US President Donald Trump delivers remarks to U.S. military personnel at Naval Air Station Sigonella following the G7 Summit, in Sigonella, Sicily, Italy, May 27, 2017.
(photo credit: REUTERS/DARRIN ZAMMIT LUPI)
Advertisement
US President Donald Trump reaffirmed, Sunday, America's "unbreakable bond with the State of Israel" during a speech to US troops stationed at the Naval Air Station Sigonella in Sicily, Italy.Speaking at the final event of his foreign trip before returning to Washington, Trump said that he "was awed by the beauty of the Holy Land and the faith and reverence of the devoted people who live there," and added that "all children from all faiths deserve a future of hope and peace. A future that does honor to God."Referring to his two-day visit to Israel and the Palestinian territories, Trump declared his optimism with regards to the currently-stalled peace process. On his meeting with Palestinian Authority President Mahmoud Abbas, the US president stated that the Palestinian leader "assured me he's willing to reach for peace with Israel in good faith," and told the crowd that "Israeli Prime Minister Benjamin Netanyahu assured me that he too was ready to reach for peace. He's a friend of mine and he means it."
President Trump Gives Remarks at the Israel Museum
During his trip, Trump became the first sitting US president to visit the Western Wall and he described the holy site as "a monument to the perseverance of the Jewish people."Introduced to the stage by his wife Melania, Trump announced that his discussions during the trip had "further isolated the Iranian regime over its hostile and destabilizing actions," and stated that he "was deeply encouraged to hear from leaders of many Muslim and Arab nations that they are willing to take on a greater role in combating terrorism." The president's nine-day foreign trip also included visits to Saudia Arabia, the Vatican and a two-day summit with Group of Seven leaders in Sicily.