The only mention of Jewish groups or activities in the 'disorientation guide' is in a section for 'Israel Apartheid Week.' 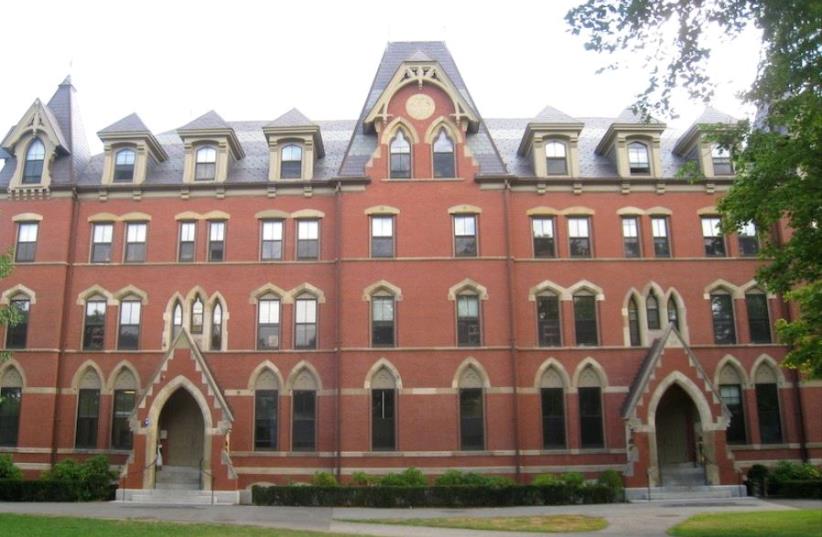 West Hall at Tufts University
(photo credit: Wikimedia Commons)
Advertisement
Tufts University’s Hillel is described as “an organization that supports a white supremacist state” in a student-written guide to activist life at the university.

The Tufts University Disorientation Guide offers information on social, spiritual, health and academic resources at the Boston-area university, but singles out Hillel for opprobrium, calling it a “Zionist space” and accusing it of “exploit(ing) black voices for their own pro-Israel agenda.” The guide has been widely read and shared on social media.

“We have been working so hard to create a positive atmosphere on campus, and we have such a positive Israel presence,” Summit said, adding that over 100 Tufts students visit Israel each year.

The accusation that Tufts Hillel exploits “black voices” stems from three years ago when Hillel brought to campus the parents of Trayvon Martin, the black teenager who was shot in 2012 by a neighborhood watch volunteer in Sanford, Florida, to speak about gun violence.

According to the guide, “Students were outraged that Hillel, an organization that promotes a white supremacist state, were bringing Trayvon’s parents to exploit black voices for their own pro-Israel agenda.”

Like other campus Hillels, the Tufts center offers a range of social, cultural, educational and religious events in addition and often unrelated to pro-Israel activity.

The disorientation guide was created by and for leftist student groups on campus, and suggests resources for students of color, low-income students, the LGBT community and women. The only mentions of Jewish groups or activities, including Hillel, appear in a section for “Israel Apartheid Week,” a pro-Palestinian event, and in a description of the Pan African Alliance’s 2015 protest of the Trayvon Martin event.

Such guides have been created on other campuses as an alternative to the official student guides distributed by the university administration. The most recent disorientation guide at Columbia University criticized its administration for “supporting the oppression of Palestinians both through its investments and by suppressing anti-Israel speech by students and faculty.” The 2016 version at New York University asserts that students visiting Israel on a Birthright trip are “complicit in the occupation, destruction, and colonization of Palestine.”

The Tufts version does not receive university funding, according to Tufts’ executive director of public relations, Patrick Collins, and is not part of the university’s official orientation program.

The disorientation guide “was posted without authorization by students on two official Class Facebook pages and prompted a number of student complaints,” Collins told JTA in an email. “Although we respect students’ rights to free speech and expression, we also reserve the right to determine what may or may not be appropriate to share through the university’s official communications platforms. The university removed the guide shortly after being made aware of its posting because the guide is unauthorized and because multiple portions of the guide run counter to our community’s shared values and standards and to Orientation’s mission.”

A small group of friends created the Tufts guide after a 2016 edition fell through. They used the 2015 edition as a template.

Emmett Pinsky, a junior majoring in American studies with a minor in English, was among those who worked on the guide. Pinsky, who is Jewish, said that if people feel shocked by the guide’s strong language, it is doing its job.

Pinsky’s knowledge of Hillel is limited, the junior said, and stems from attending services a few times in his freshman year. Pinsky has not visited Israel. But the authors stand by the guide, Pinsky said, noting that Tufts Hillel is broadly pro-Israel.

“Israel is certainly implicated in systems of white supremacy,” Pinsky said. “The fact that many white Jewish people feel favorably toward the Jewish state and the occupation of Palestine comes from a desire to preserve whiteness in the way it is unfolding in Israel and Palestine.”

If people feel alarm at Tufts Hillel being implicated in white supremacy, Pinsky said, “I think that feeling of alarm is worth exploring to see if that has a deeper root.”

The charge that Zionism is tantamount or similar to white supremacy has become increasingly popular on the anti-Zionist left.

Naomi Dann of the pro-BDS group Jewish Voice for Peace argued in The Forward recently that Zionists and white supremacists share “anxiety about demographics and racist and Islamophobic fear of ‘Arabs.'”

The Anti-Defamation League respondedto Dann’s piece by asserting that Zionism “is based on providing for equal opportunity for the Jewish people, like others, to have sovereignty in their land while still fully protecting the rights of minorities who live within Israel. At its core, Zionism is a positive movement and is not intended to be ‘against’ anyone.”

For some students, the Tufts University Disorientation Guide has made their campus seem a colder, less welcoming place.

Sabrina Miller, a Jewish sophomore majoring in computer engineering, said the guide “gave a lot of support to other groups” and that made its negativity about Hillel more painful.

“For freshmen who are Jewish, who support Israel, I think it will make them feel unwelcome or uneasy” at Tufts, she said. “I know it definitely made me feel uneasy” on campus.

Sophie Saunders, also a Jewish sophomore majoring in computer engineering, the guide brought back memories of a bitter dispute five months ago when the Tufts student senate voted to divest from Israel. Saunders, who describes herself as a Zionist, attended the  debate and was reduced to tears.

Jewish and pro-Israel students were upset that the vote was brought up unexpectedly before the senate by Students for Justice in Palestine just days before Passover.

Jews make up nearly 25 percent of the university’s undergraduate enrollment of 5,290, according to the Forward’s recent college guide. In addition to Hillel, Jewish and Israel-oriented groups include the Tufts American Israel Alliance, Tufts Friends of Israel, J Street U, Jewish Voice for Peace, TAMID and IAC Mishelanu.

Noting that after the disorientation guide she feels “less welcome” at Tufts, Saunders said she has a plan: “I would like to say I’d like to get more involved” in pro-Israel activities at the university as a way to fight back.