Kanter posted a video to Twitter in which he claims men who support Turkish president Recep Erdogan were harassing both him and teammate Tacko Fall outside a mosque in Boston on Friday afternoon. 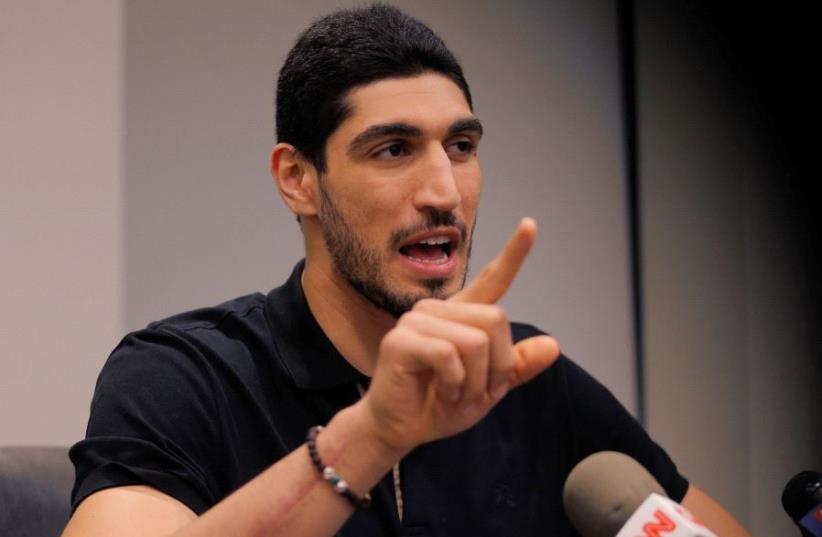 Turkish NBA player Enes Kanter.
(photo credit: REUTERS)
Advertisement
Boston Celtics center Enes Kanter, whose highly publicized criticisms of Turkey's president have made him a wanted man in his former homeland and has led him to avoid playing overseas, on Saturday claimed he and a teammate were harassed at a Boston mosque.
Kanter posted a video to Twitter in which he claims men who support Turkish president Recep Erdogan were harassing both him and teammate Tacko Fall outside a mosque in Boston on Friday afternoon.
"There's Turkish people attacking us. I told you, America, this is crazy, right?" Kanter said in the video. It appears one of the men Kanter claims to be harassing him is also filming Kanter with his phone. The men talking to Kanter were speaking in Turkish.
Talking to reporters Saturday before the Celtics held their annual open practice at TD Garden for fans, Kanter said he will continue to speak out against Turkey and what he believes are human rights violations in the country, which revoked his passport in 2017. In an article he wrote for Time in 2018, Kanter said he is "now stateless and pretty much can't leave the United States."

Kanter also told reporters Saturday that he plans on hiring full-time security in light of the incident, which reportedly took place outside the Islamic Society of Boston mosque in Cambridge, Mass. Kanter told the media he and Fall -- a rookie who is Senegalese -- chose that mosque because of its proximity to the Celtics' facility and went there between practices Friday.
"Our second practice was at 3 p.m. So I went to this mosque, we prayed and me and Tacko were about to leave, and then we were just outside and there were just these two guys," Kanter said. "You can see on the video they were just waiting for us. They were screaming, they were yelling, they were cursing.
"It was pretty crazy, because this is America. You should be safe to come in a mosque and pray peacefully. It was the first time it's happened to me in America, but it was definitely scary because I looked at Tacko and said, 'Tacko, don't worry about it. I've got it. We're fine.' But we were just waiting for our Uber, so it was crazy and scary."