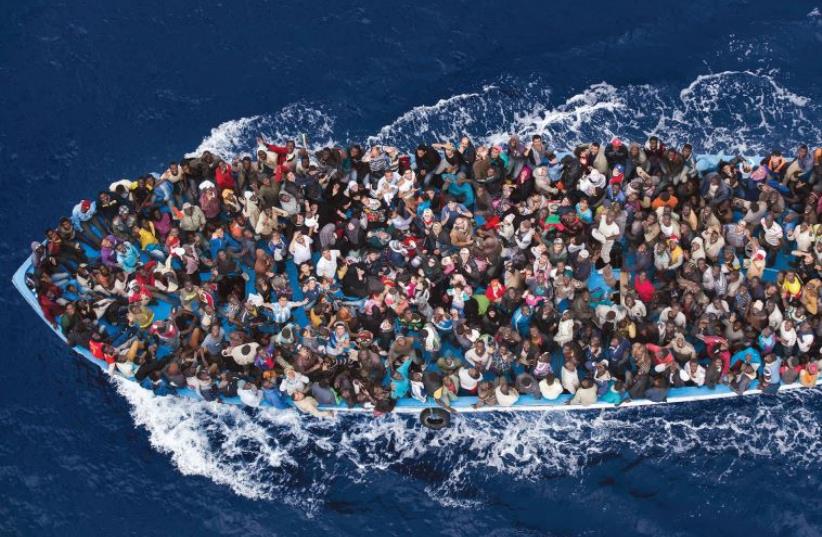 Massimo Sestini’s entry, which took second place in the General News slot, is a colorful overhead shot of refugees packed into a boat off the Libyan coast, prior to being rescued by an Italian naval frigate.
(photo credit: MASSIMO SESTINI)
Advertisement
ISTANBUL - Two people children after a boat carrying migrants sank just 50 meters off Turkey's western coast near Bodrum early on Monday, the coast guard said.Seventeen people on the boat were rescued and three made it to shore by themselves, the coast guard said. Two of those people later died at the hospital, it said.It did not specify the migrants' nationalities.Search and rescue activities are continuing for possible missing passengers, the coast guard said.Turkey became one of the main launch points for more than a million migrants taking the sea route to EU territory in 2015, many fleeing conflict and poverty in the Middle East and Africa.The influx of migrants was drastically curtailed by a 2016 accord between Ankara and the EU, after hundreds died crossing to Greek islands a few miles off the Turkish shore.Mediterranean arrivals to the bloc, including refugees making the longer and more perilous crossing from North Africa to Italy, totalled 172,301 in 2017, down from 362,753 in 2016 and 1,015,078 in 2015, according to United Nations data.