The two men who traveled with fake passports are at center of mystery surrounding disappearance of Malaysia Airlines plane.

By JPOST.COM STAFF, REUTERS
MARCH 11, 2014 15:51
Iranian identified as holder of stolen passport
(photo credit: REUTERS)
Advertisement
Malaysia's police chief said on Tuesday that one of the two men holding false passports who boarded the Malaysian airliner that vanished last week was an Iranian national.The identity of the other man was being investigated, Inspector General Khalid Abu Bakar told a news conference.The tickets of the two men traveling with fake passports on Malaysia Airlines flight MH 370 were purchased by an Iranian man in Tehran, according to a report by The Financial Times on Monday.The tickets for the flight, which disappeared off the coast of Vietnam on Saturday, were booked by a Mr. Ali through the Thai travel agency Horizon Travel. The agency has stated that Mr. Ali was a businessman who has worked with them for the past three years. 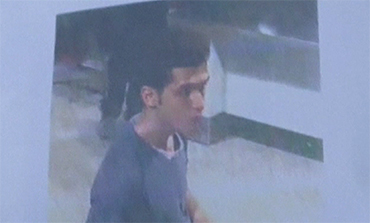 Photograph of Iranian Pouria Nour Mohammad Mehrad identifed as holder of stolen passport
Originally Mr. Ali asked to book both tickets for "friends" on the cheapest flights - two separate flights at the time. However, he did not confirm the purchase and was forced to re-order.The travel agency said that the second time both tickets were booked on Malaysia Airlines because they were the cheapest flights at the time. The end destination for both passengers was Europe. According to Malasyian Minister of Defense Hishamuddin Hussein, photographs of both of the men traveling under false identities were been revealed to US officials in Kuala Lumpur, Malaysia.Speculation has been raised as to the possibility of a terror-motivated hijacking, although no supporting evidence has been discovered. The fact that some of the electronic signal evidence shows the plane may have attempted to turn back towards Kuala Lumpur points to a technical problem rather than terrorism.A senior Malaysian police official stated that in the past, "We have stopped men with false or stolen passports and carrying explosives, who have tried to get past KLIA (airport) security and get on to a plane." He added, "There have been two or three incidents, but I will not divulge the details."Interpol confirmed on Sunday that at least two passengers used stolen passports and said it was checking whether others on board had used false identity documents.Authorities have stated that stolen passports and immigration fraud are common in Asia, where illegal activities such as drug smuggling often involve the use of stolen passports. Airport authorities in Malaysia have confirmed that both passengers underwent full security examinations including X-Ray, along with all the passengers aboard the missing plane.
Advertisement
Subscribe for our daily newsletter