The two officers had been helping to quell the violence that erupted in Charlottesville. 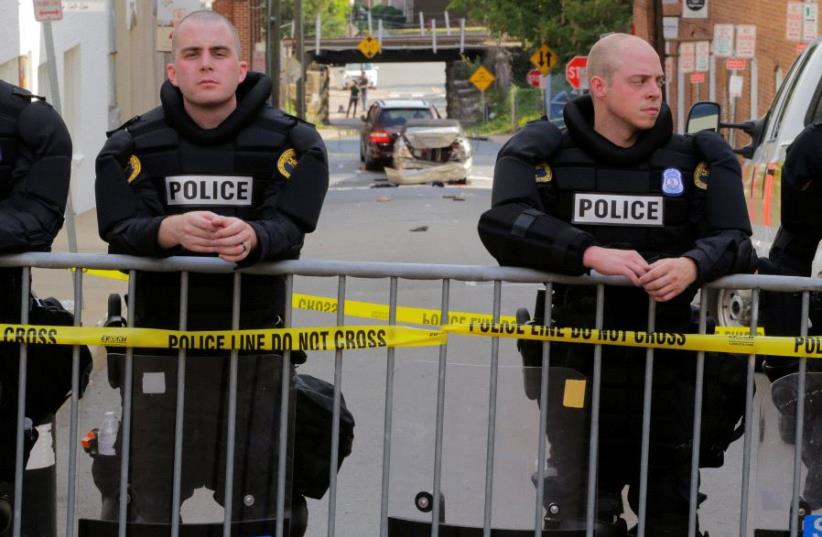 Virginia State Police in Charlottesville
(photo credit: JIM BOURG/ REUTERS)
Advertisement
Two Virginia state policemen were killed on Saturday (August 12) when a helicopter in which they were riding crashed after assisting in efforts to quell clashes between white supremacists and counter-protesters in Charlottesville.
The pair were among three people who authorities said died in connection with the violence near the main campus of the University of Virginia. A 32-year-old woman died when a car plowed into a crowd dispersing after police broke up the melee in the city's downtown.
The helicopter pilot, Lieutenant H. Jay Cullen, 48, of Midlothian, Virginia, and Trooper-Pilot Berke M.M. Bates, 40, of Quinton, Virginia, died at the scene of the crash in Albemarle County, the state police said in a statement included in a Twitter message sent by NBC29 of Charlottesville. No one on the ground was injured, it said.
President Donald Trump sent his condolences to the families of the officers and their colleagues in the Virginia State Police.
The Bell 407 helicopter went down 7 miles (11 km) southwest of Charlottesville, Jim Peters, a spokesman for the Federal Aviation Administration, said in an email.
National Transportation Safety Board spokesman Peter Knudson said the cause of the crash had not been determined. The NTSB is sending investigators to the scene, he said.