Two years after France's 9/11, is the Fifth Republic turning into Israel?

Terrorism is not a new phenomenon for France, but the 2015 attacks became a tipping point.

By EMILY BOULTER & TAMIR LIBEL
NOVEMBER 22, 2017 16:33
Police at scene of Paris attack
Advertisement
Last week, France marked two years since the horrific attacks of November 13, a date that has become the European country’s own 9/11. The string of attacks that claimed the lives of 130 people was a wakeup call to a virulent terror threat that hitherto only affected certain sectors of French society: the military, the media and most perniciously, the Jewish community, who over the last 10 years has had to contend with horrific antisemitic attacks. The most notable examples are the kidnapping and torture of Ilan Halimi in 2006 and the 2012 murder of three children and their teacher at a Jewish school in Toulouse by Mohammed Merah.
Many experts and observers believe the 2015 attacks were a tipping point for the country. “France entered a new world after the Charlie Hebdo office attack. The attacks in November [2015] were an amplification of this,” said Marc Pilkington, Associate Professor of Economics at the University of Burgundy Franche Comté.There is significant evidence to support this. After the attacks against the offices of Charlie Hebdo and later the Hyper Cacher supermarket at Porte de Vincennes, the military was ordered to deploy troops under Operation Sentinelle, which remains in place to this day.  At least 10,000 troops have been assigned to patrol the streets and guard vulnerable targets. It is worth mentioning that it is the largest operation on French soil since the Algerian war in the early 1960s.Terrorism is not a new phenomenon for the Fifth Republic. According to the National Consortium for the Study of Terrorism and Response to Terrorism, 2,580 terrorist attacks took place in France between 1970 and 2014, killing 269 people, including 15 perpetrators. But most attacks have been target-specific and orchestrated by groups with clearly defined political aims and objectives. The 1995 bombings carried out by the Algerian Islamist group the GIA (Armed Islamic Group) against the Paris Metro and its regional train network is an exception. But traditionally, ordinary members of the public were spared from having to deal with the consequences of enduring a prolonged terror campaign. The spate of low and high-grade attacks that have occurred, over the last two — pushing three — years, however, have resulted in the deaths of 239 people, helping to compound a general sense of uneasiness among French citizens. Politicians and the security services have been scrambling to assess how best to navigate through these uncertain times. 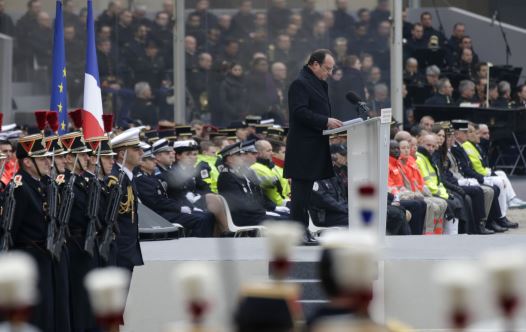 In the aftermath of the November attacks, President Francois Hollande declared a state of emergency, which was extended six times. Through this, the police were granted significant powers to conduct raids on homes, day or night, without the need of a warrant, organizations could be shut down if suspected of having links to terrorism and people could be placed under house arrest. The sweeping powers granted to law enforcement did not sit well with many groups who were concerned with the government’s encroachment on civil liberties. “The state of emergency was unusually long, a bit like a new normal,” noted Pilkington. Sociology Professor Sébastien Jakubowski from the ESPE Lille Nord de France, however, believes that in managing the crisis, Hollande proved to be a strong president who was sympathetic to the victims, while at the same time firmly supporting the state in its fight against terrorism.Since entering office, President Emmanuel Macron has been determined to add new vigor to all aspects of the country´s administration, including security and defense. On October 30, he signed into law a new raft of measures designed to tackle the terror threat within the French Republic, and in doing so put an end to the country’s state of emergency. The effort is intended to integrate much of the emergency powers into the standard law. As part of the country’s 2017 Strategic Review of Defense and National Security, the French government aims to increase defense spending to 2% of GDP by 2025. Macron is under no illusions that apart from the economy, his handling of security will be the acid test of his presidency.
If more high-profile attacks occur under Macron's watch, France may seek to adopt a security model, which incorporates lessons from the Israeli experience. These include the use of social media surveillance and analysis in the prevention and disruption of lone-wolf attacks, as well as the chance to adopt techniques from Israel's HUMINT collection system. Israelis have been subjected to vehicle attacks, and over the last 20 years and the country has developed "battle tested" practices to maintain traffic and crowds in the event of such attacks.But while France is going through a unique period in its history — at least in terms of how it handles security — there are few signs its government is ready to embrace an Israeli approach. Dr. Gérald Arboit, director of research at the Centre Français de Recherche sur le Renseignement (CF2R), is adamant that France does not make an eligible candidate. “France is not Israel and the French reality has nothing to do with Israel’s struggle for survival,” he notes. Emily Boulter is a writer based in Switzerland. From 2010 -2013 she worked as an assistant to the Vice-chair of the Foreign Affairs Committee in the European Parliament. Dr. Tamir Libel (@drtamirlibel) is a Beatriu de Pinós Research fellow at the Barcelona Institute of International Studies (IBEI).