By SETH J. FRANTZMAN
SEPTEMBER 13, 2017 03:14
A Syrian family from Palmyra, including children with carnival costumes, read an information leaflet advising on social etiquette for refugees ahead of the carnival season, at a refugee camp in Mainz, Germany February 1, 2016
(photo credit: REUTERS/KAI PFAFFENBACH)
Advertisement
It was lightly raining on the border of Hungary and Serbia two years ago. This added a layer of depression as I watched thousands of people walking along old railroad tracks to try to enter the European Union and gain asylum.They trundled with bags on their backs, sometimes with tents, but more often with children perched on their shoulders or held across their chests. They were mostly Syrians, some of the millions who had fled the war between rebels and Bashar Assad’s regime. They had made the difficult passage to Turkey and then at sea to Greece on inflatable boats with cheap life preservers that barely floated. Then they had come to mainland Greece, pushed their way across the bridge to Macedonia, and thence on to Serbia. Hungary was the gate to the EU and they had reached the gate, along an abandoned railway line.Two years ago, on the night of September 13, 2015, Hungary completed a border fence across railroad tracks that linked the town of Roszke with Horgos in Serbia. The day before more than a thousand people had crossed as they had been doing for weeks. Media at the time described the vast numbers of refugees and migrants entering Europe in biblical terms. “Multitudes” and a “flood” pouring across the borders. Migrants were “flowing” into the EU.According to the UNHCR more than 1 million people arrived by sea to Europe in 2015, part of a massive crisis whose reverberations are still being felt in elections in Germany and in the decision by the UK last year to leave the EU. The European Court of Justice, the highest court in matters of European Union law, ruled on September 6 against Hungary’s and Slovakia’s desire to not be part of EU-wide quotas for migrants, a stance they took in 2015. 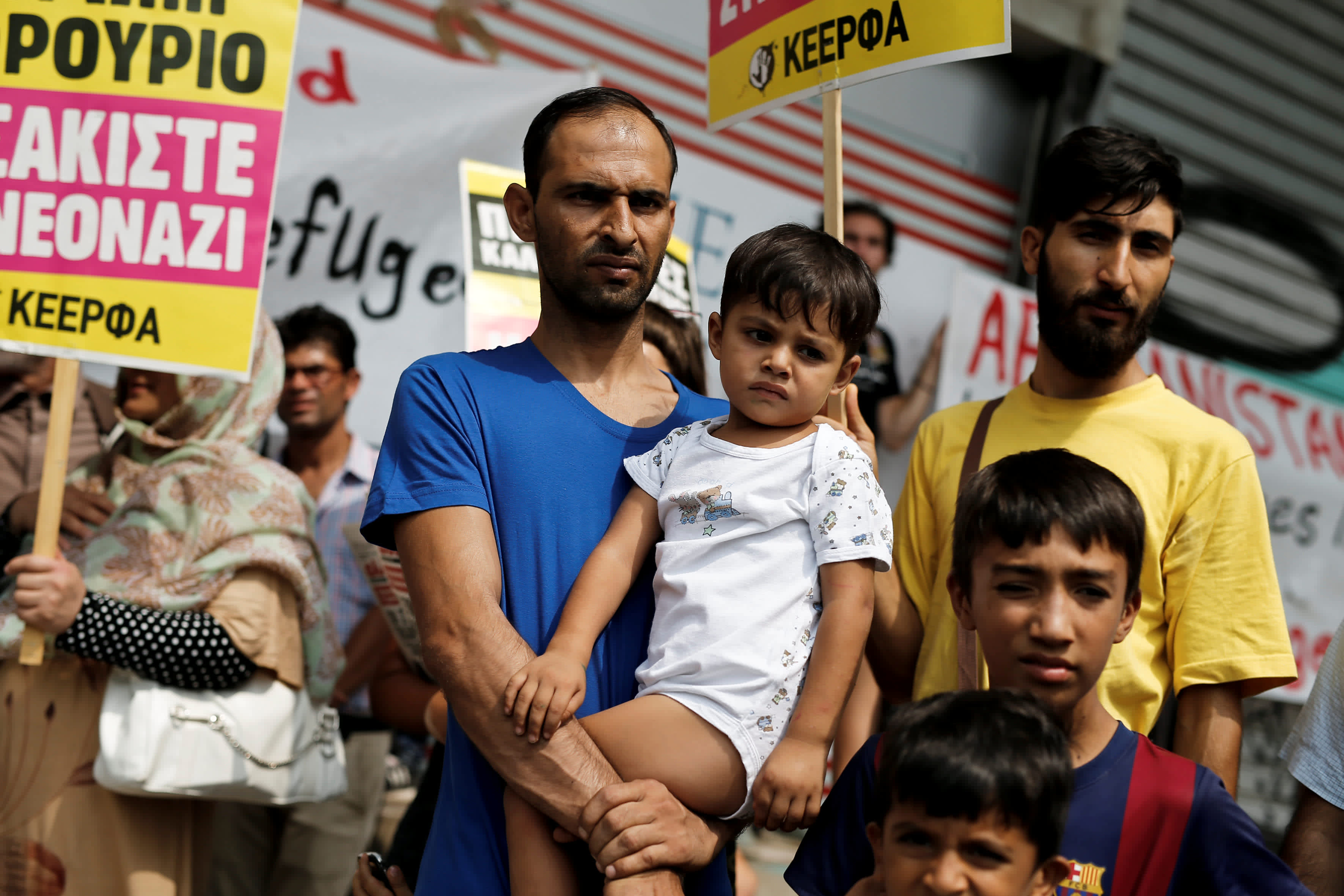 Afghan migrants living in Greece take part in a protest demanding rights as refugees fleeing war, outside the Migration Ministry in Athens, Greece August 22, 2017 (REUTERS/ALKIS KONSTANTINIDIS)It’s hard to imagine today how a million people entered Europe in 2015. The European Union is a wealthy club and its strongest states are among the wealthiest per capita in the world. Yet, despite all the financial power in Sweden, Germany, Austria, Denmark, France and Belgium, the EU’s approach to migration has been haphazard and chaotic.When I got to the Greece-Macedonian border at Idomeni-Gevvelija where most refugees and migrants had come to cross, there was organized chaos. Greek police were lining people up in groups of 50 and marching them to a bridge. On the other side of the bridge, where a thousand people were crammed, the Macedonian Army held the migrants at bay while buses were arranged to take them to Serbia. No one had a passport checked. No one checked travel documents.I had crossed the same border, but via a highway, and gone through a border control post where my passport was examined. But for a million people, there were no checks. The method used in Greece, Macedonia, Serbia, Hungary and later other countries, was to encourage the migrants to move north. Most of them wanted to move north anyway, hoping to resettle in Germany or Scandinavia. 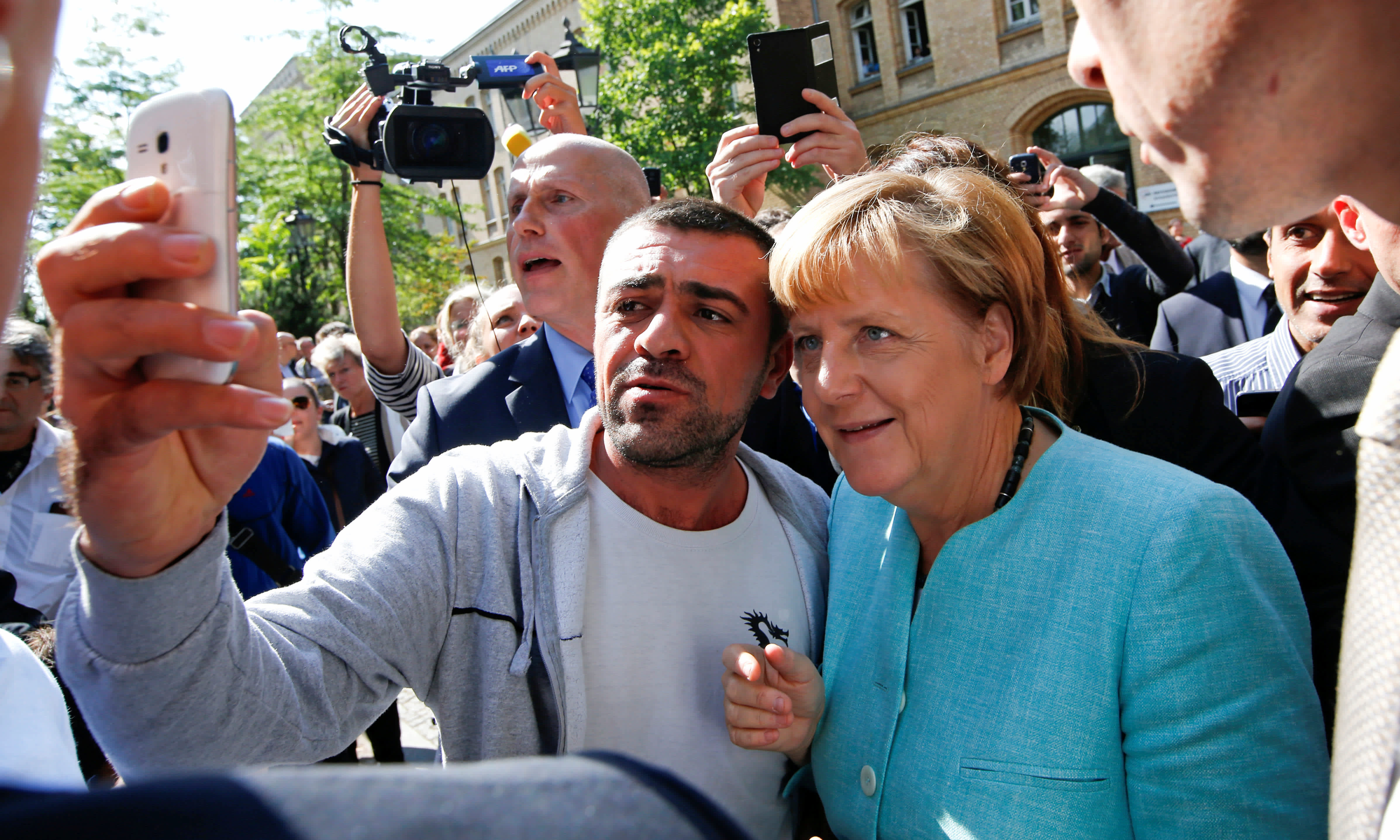 A migrant takes a selfie with German Chancellor Angela Merkel outside a refugee camp near the Federal Office for Migration and Refugees after registration at Berlin's Spandau district, Germany September 10, 2015 (REUTERS/FABRIZIO BENSCH)German Chancellor Angela Merkel had welcomed refugees and encouraged the 28 other states of the EU to act as well. She described the situation facing Syrian refugees in 2015 as “exceptional.” Syrians facing four years of civil war with no end in sight were seeking a new life. Today Merkel is facing an election on September 24 and her rival, Martin Schulz of the Social Democrats, has challenged her on the 2015 chaos. But his critique has been tepid, saying at a televised debate in early September that “the inclusion of our European neighbors would have been better.”The burden of migration has fallen hardest on Greece as a transit point. The long-term effects of German policy and then Hungarian policy to close the border in the fall of 2015, buffeted Greece. In May of 2016 reports noted that more than 50,000 refugees and migrants had become “stuck” in Greece, living in tent camps near the border. There were riots and fights over food and also to try to get across the border to Macedonia.In February 2016, Macedonia constructed a second fence along its border. The EU decision to welcome migrants had not considered that Macedonia, a non-EU state, would be so affected. A country of only 2 million people, it was asked to become the transit point for an unprecedented number of poverty-stricken travelers who, if grouped together, would be half the population of Macedonia. Rarely in history has such a small country become a transit point for so many in such a short period. Macedonia declared a state of emergency to deal with it.Hungary, an EU state, has consistently rejected attempts by the rest of the bloc to impose a scheme by which all the member states take in refugees. 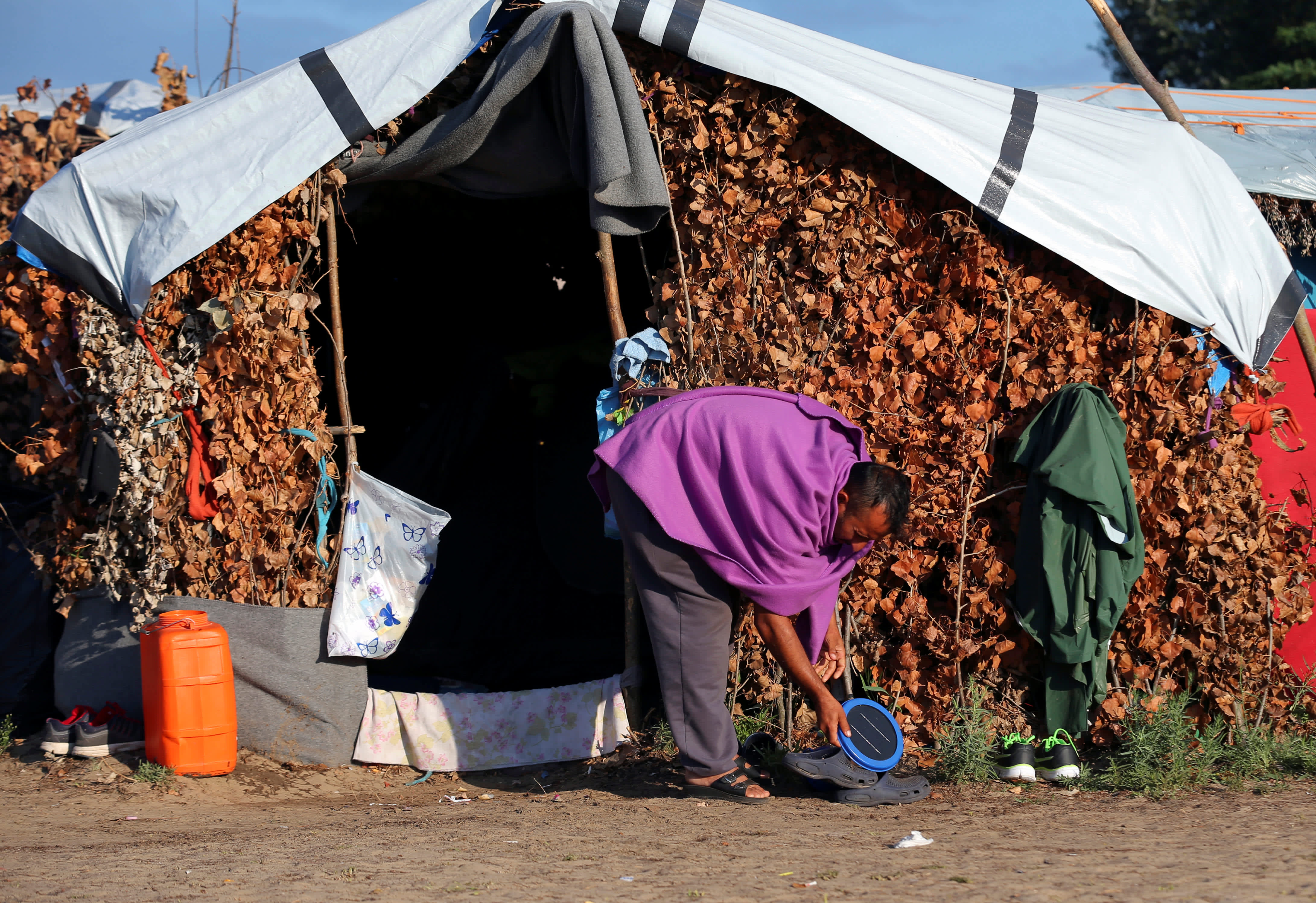 A refugee cleans his tent in a makeshift camp on the Hungary-Serbia border, on the Serbian side of a transit zone set up by Hungarian authorities to filter refugees at Roszke, Hungary, September 2, 2016 (REUTERS/LASZLO BALOGH)After two years of haggling, the European Court of Justice ruled against Hungary and Slovakia. “This decision jeopardizes the security and future of all of Europe,” Hungarian Foreign Minister Peter Szijjarto responded. “Politics has raped European law and values.”Prime Minister Viktor Orban has rejected the demand that Hungary absorb migrants. Along with other members of what is called the Visegrad Group – Poland and Slovakia – the position is that countries should preserve their national and unique heritage. This appeals to Central and Eastern European states that left the shackles of the Soviet bloc a quarter century ago. They have been wrestling with economic reforms and finding their footing since the fall of Communism. The arrival of migrants presented a new crisis that also awakened old nationalism.NGOs such as Doctors Without Borders have condemned what they describe as “arbitrary border restrictions” on the migration crisis that began in 2015. “Refugees are being provided with no information, little-to-no humanitarian assistance and are at risk of violence,” MSF wrote in a February 2016 statement. The “failure of European governments to find collective and humane answers is only producing chaos, arbitrariness and discrimination,” it said.This had repercussions in the UK as voters sought to leave the EU in a narrow vote in June 2016. A survey by the National Center for Social Research found that 73% of those who voted “leave” were concerned about immigration. The 2015 crisis fed these fears and likely pushed the “leave” vote over the top as scenes of riots and migrant camps and people trying to push their way onto trucks at Calais to enter the UK filled the media. 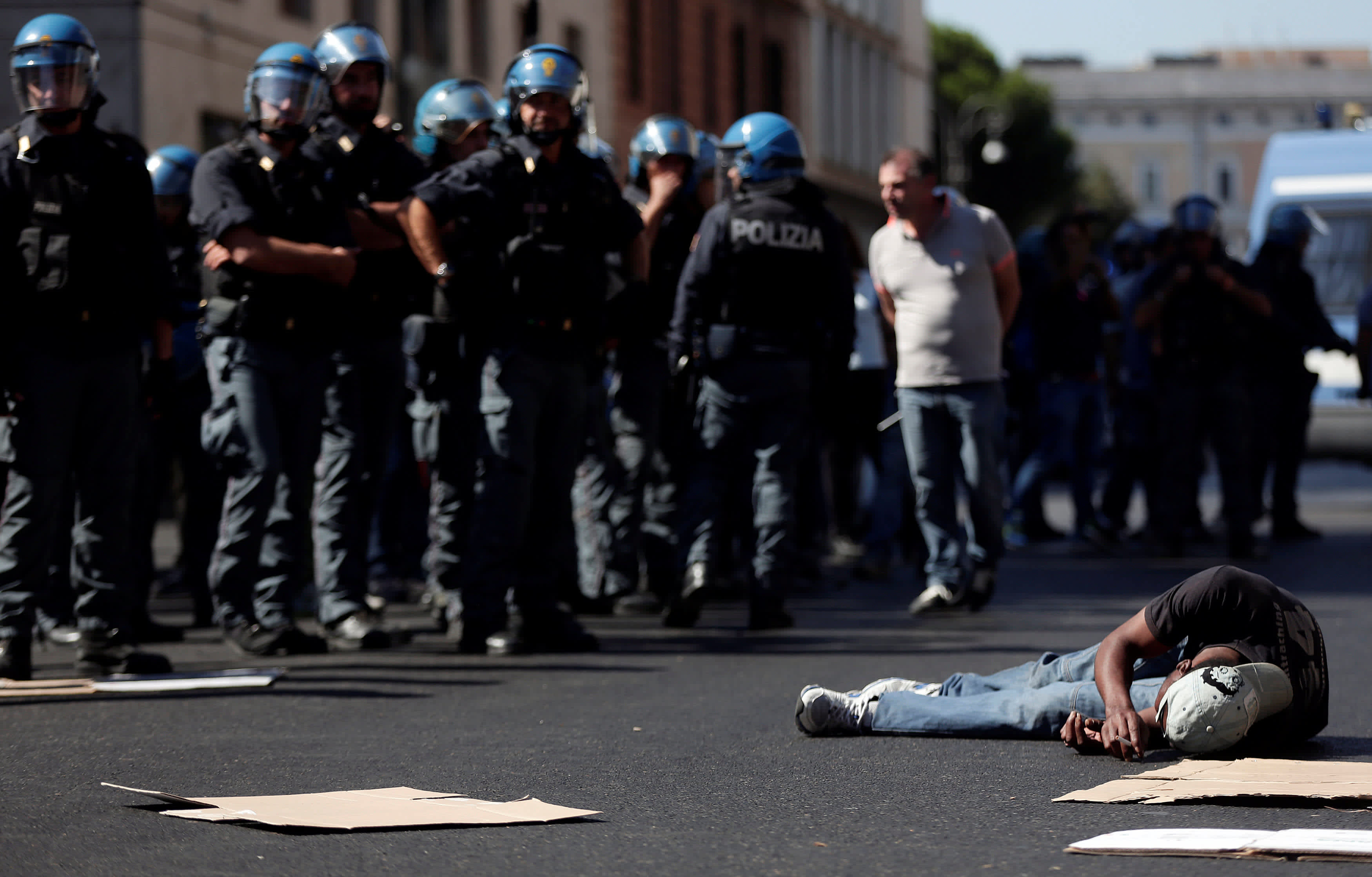 A refugee protests in the street after being forcibly removed from a building where he had been living, in central Rome, Italy August 23, 2017 (REUTERS/YARA NARDI)In the aftermath of the November 2015 terrorist attacks in Paris that killed 129 people, one of the passports of the perpetrators showed he came through Greece. He had landed at Leros in October 2015. The man’s passport was also found to be fake. A report by Sky News noted that “two of the suspects have arrived in the EU through Greece in recent months.”This sent concerns through intelligence agencies across Europe with fears that ISIS members might infiltrate refugees who were arriving. With so few border checks being carried out at the point of entry in Greece or along the way, there are fears that the 2015-2016 crisis may be a long-term security threat to Europe.However, the reality is that more than 5,000 European citizens joined ISIS in 2014, traveling to Syria often via Turkey. Although some of them are returning, the depiction of the threat coming from Syria is complex. Much of the threat of ISIS in Europe is homegrown and almost none of the 1.7 million or so migrants who arrived between 2014 and 2017, have carried out attacks. Nevertheless, the long-term effects of the crisis that erupted two years ago will continue to affect Europe and especially the cohesiveness of the EU and its values such as freedom of movement.