"Online extremists seem to able to act with impunity, occupying spaces owned and managed by legitimate and very wealthy corporations." 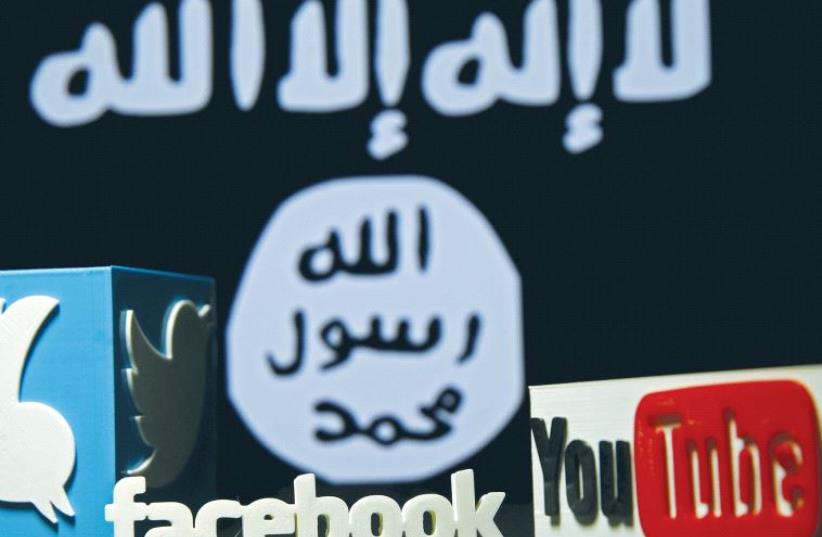 A 3-D PLASTIC representation of the Twitter, Facebook and YouTube logos is displayed in front an Isis flag. Islamic State is considered a pioneer among terrorist organizations regarding innovation in the cyber world.
(photo credit: DADO RUVIC/REUTERS)
Advertisement
LONDON - Technology and social media firms are allowing extremists to act with impunity and lack commitment in tackling the online terrorist threat, a senior British police officer said on Tuesday.Mark Rowley, Britain's top counter-terrorism officer, also criticized major communication service providers for failing to take action against extremists, saying they had failed to make a single direct referral to British police about terrorist activity on their sites."Online extremists seem to able to act with impunity, occupying spaces owned and managed by legitimate and very wealthy corporations," Rowley told a security conference in London."They are effectively private tenants to their communication service provider landlords. In the real world, if a landlord knew their property was being used to plan or inspire terrorist attacks, you would expect them to show responsibility by informing the authorities."The British authorities have long accused tech firms of failing to do enough to tackle the problem of extremism on the internet, saying they had too often turned a blind eye to the actions of those using their services.The country's security minister has warned Britain might impose taxes on giants like Google and Facebook unless they did more to combat online extremism and interior minister Amber Rudd traveled to Silicon Valley last year to call for action after four deadly attacks in 2017 which killed 36 people..".. as a police service we have yet to receive a direct referral from them when they have identified such (terrorist) behavior," Rowley said.He said it was not right that a person could be radicalized online by viewing illegal content, could communicate with an extremist using encrypted communications, could research potential targets and download bomb-making material.He said future tools and technology should be designed "with corporate social responsibility in mind" so they could not be exploited by terrorists.Whilst he said the financial sector had taken steps to address terrorism funding, social media firms had not done enough."Despite major progress in recent months, I am not as reassured by the level of proactivity and commitment of communication service providers about tackling the terrorist threat," he said.Julian King, the European Union's security commissioner, also told the conference that unless rapid progress were made on taking down extremist material, there was a "real risk of fragmentation" leading to 28 different forms of legislation being passed across the bloc.