The resolution in Geneva reaffirms support for the 2001 Durban Declaration which singles out Israel as a perpetrator of racism.

The UK, Germany and nine other countries that boycotted the Durban IV Conference at the UN General Assembly because of its antisemitic history are set to support a pro-Durban resolution at the UN Human Rights Council on Monday.

The resolution in Geneva, much like the conference in New York less than three weeks ago, is mostly focused on racism against people of African descent. But it reaffirms support for the 2001 Durban Declaration, which singled out Israel as a perpetrator of racism and supports the very conference those 11 countries boycotted.

The resolution was proposed by Cameroon, Chile, Turkey and Yemen. It also requests the launch of an “outreach and a public information campaign for the commemoration of the twentieth anniversary of the Durban Declaration,” as well as a two-year program to “raise awareness about and mobilize public support for racial equality... including about the content and contribution of... the Durban Declaration,” which would focus on young people via social media.

The UNHRC resolution against racism, including support for the Durban process, is set to be approved by the committee on Monday morning by consensus because no country has called for a vote. The resolution is passed every two years; when the US was on the committee, it called for a roll-call vote, but it is not currently a member of the panel, nor is Israel.

The UK, France, Germany, Netherlands, Italy, Czech Republic, Austria, Bulgaria, Poland, Denmark and Uruguay boycotted the commemoration of the World Conference Against Racism in Durban, called Durban IV, in New York last month but have not called for a vote on Monday’s pro-Durban resolution. 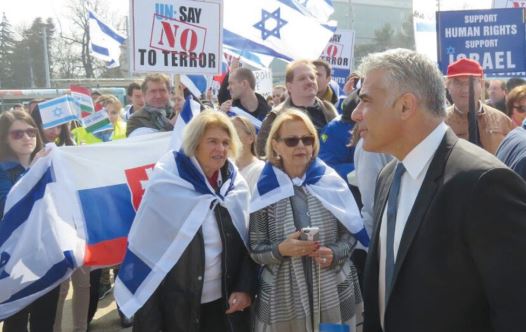 Israeli diplomats in Geneva, Jerusalem and relevant capitals have been working to point out the inconsistency of these countries’ positions, encouraging them to call for a vote.

“The reasons that brought 38 countries to boycott Durban in New York are the same reasons that are relevant in Geneva today. Nothing has changed in two weeks,” an Israeli diplomatic source said.

Some countries view Geneva as a different arena with different interests than New York and, therefore, vote differently, the diplomat said. The way many countries vote in Geneva does not necessarily reflect the nature of their bilateral relationship with Israel.

Last week, just two days before the UK was set to allow the pro-Durban resolution to pass, British Foreign Secretary Liz Truss said the UK has “no closer friend and ally” than Israel and that her country wants to “develop a deeper relationship” with it. The vote was postponed from Friday to Monday.

The day before that, the European Commission, which is the EU’s executive arm, presented its first-ever strategy for combating antisemitism.

The 2001 Durban Conference was rife with antisemitism. Copies of The Protocols of the Elders of Zion were distributed at its NGO Forum, and an exhibition of anti-Israel cartoons portraying Jews and Israelis as hook-nosed and bloodthirsty was displayed.

Tens of thousands of people demonstrated against Israel, comparing it to Nazi Germany and calling it an apartheid state. The Israel-Palestinian conflict was the only one specifically mentioned in the resolution adopted by UN member states at the conference, from which Israel and the US pulled out.

At the Durban Review Conference in 2009 and 2011, former Iranian president Mahmoud Ahmedinejad denied the Holocaust, calling it only a “pretext” for Israel’s treatment of the Palestinians. Ten and 14 countries boycotted those, respectively.

According to Anne Bayefsky, director of the Touro College Institute on Human Rights and the Holocaust, who attended the 2001 conference: “If the UK joins consensus on this resolution of the Human Rights Council, its new Foreign Minister Truss, who only last week promised to stand up to antisemitism on the world stage, will have been played like a fiddle… Joining consensus on this resolution makes a mockery of the EU and its alleged recent interest to take steps to combat antisemitism.”

“They cannot and must not fall for the deceit, coming from the enemies of Israel and equality, that calling a vote and voting against this resolution would defeat their responsibility to combat racism,” she told The Jerusalem Post Saturday night. “Equality is not promoted by inequality and discrimination directed at Jews and the Jewish state.”

“Sometimes UN diplomats play the game of joining consensus and then giving a statement about how they really didn’t mean it or ‘disassociate’ themselves from this or that paragraph,” Bayefsky said. “That is a massive insidious charade. Once the UN adopts a resolution by a consensus, everyone understands that it will be… held up as proof of conformity of global interests and policy.”