Two out of the three attackers near London bridge have been identified. 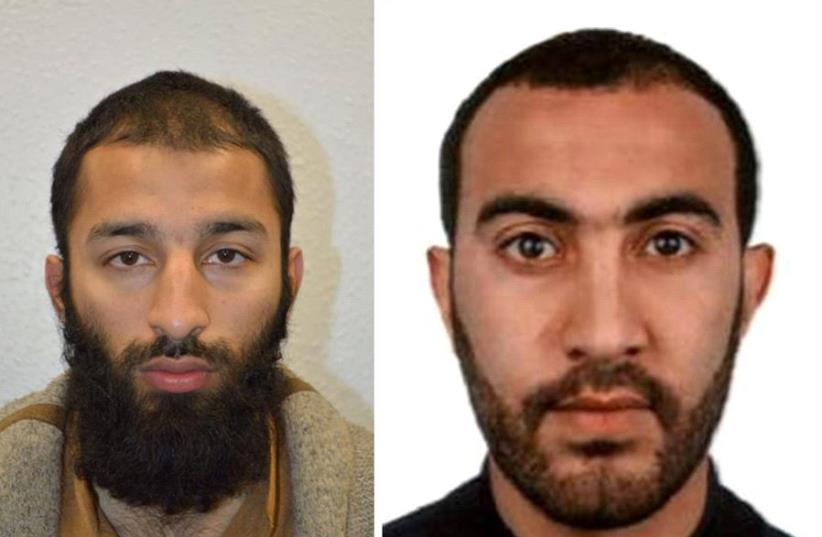 Khuram Shazad Butt (Left) and Rachid Redouane (Right), two of the three attackers in London
(photo credit: HANDOUT/REUTERS)
Advertisement
British police on Monday named two of the three attackers who killed seven people near London Bridge late on Saturday and injured dozens more, and said one of them was previously known to the security services.London's Metropolitan Police said one attacker was Khuram Shazad Butt, aged 27. Butt was previously known to police and domestic spy agency, MI5 and was a British citizen who had been born in Pakistan, the police said."However, there was no intelligence to suggest that this attack was being planned and the investigation had been prioritized accordingly," police said.The second attacker was named as Rachid Redouane, aged 30, who also went by the identity Rachid Elkhdar and was not known to police. Redouane claimed to be Moroccan and Libyan.Police said they were still working to establish the identity of the third attacker.
Cell phone videos show people running for safety after London attack (credit: REUTERS)
Seven people were killed and at least 48 wounded, including 21 in critical condition, when what are believed to have been Islamist extremists ran over pedestrians on London Bridge and then went on a stabbing rampage nearby on Saturday night.Less than two weeks earlier, a suicide bomber killed 22 people at a concert in Manchester by US singer Ariana Grande.

Josh Dell contributed to this article.