The memorial site will honor British nationals killed in the June 26 attack. 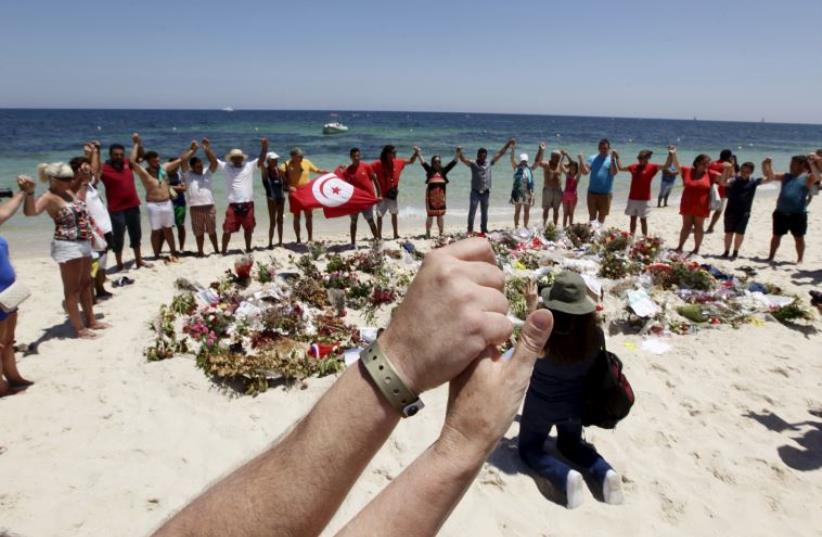 People join hands as they observe a minute's silence in memory of those killed in a recent attack by an Islamist gunman, at a beach in Sousse, Tunisia July 3, 2015.
(photo credit: REUTERS/ANIS MILI)
Advertisement
A permanent memorial site will be erected in the UK to honor the British victims of the terror attack in Tunisia, British Prime Minister David Cameron announced on Sunday. In addition, a second monument will honor British victims of other terror attacks overseas, British paper The Telegraph reported.The unveiling ceremony of the new memorial will take place in the fall.
On June 26, a gunman disguised as a tourist opened fire at a Tunisian hotel with a weapon he had hidden in an umbrella, killing 37 people, including British, German and Belgian tourists, as they lounged at the beach and pool in a popular resort town.Terrified tourists ran for cover after the gunfire and an explosion erupted at the Imperial Marhaba in Sousse resort town, 140 km (90 miles) south of the capital Tunis, before police shot the gunman dead, witnesses and security officials said.On Friday, locals and tourists observed a moment of silence on the beach at the sight of the attack. Tunisian authorities were at the time hunting further suspects identified by officials as part of a group trained in a Libyan jihadist camp alongside gunmen who carried out a massacre at a Tunis museum.In addition to the Sousse terror attack, another monument will honor victims of other overseas attacks, including those who perished in the 2002 terrorist attack on the Sari Club in Bali, which killed 28 British nationals.

“Sadly, we live in very difficult and dangerous times." said Foreign Office Minister Tobias Elwood. Ellwood, who lost his own brother in the 2002 Bali attack, has been working with families of those who lost their lives in Tunisia."We have to recognize that there are many victims of terrorism who do not have a grave, whose families don't have a place where they can lay flowers and grieve in the normal way."
Advertisement
Subscribe for our daily newsletter