Ukraine calls up reserves, readies for potential combat with Russia 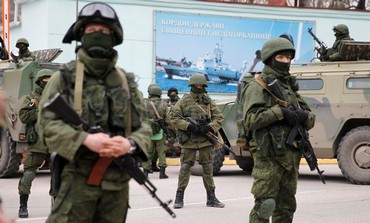 Pro-Russian protesters rally in central Donetsk. (photo credit: REUTERS)
Pro-Russian protesters celebrate after clashes with pro-government forces in Kharkiv. (photo credit: REUTERS)
Wounded supporters of pro-government forces in Ukraine recover from riots. (photo credit: REUTERS)
Ukrainians in Kiev rally for Western support. (photo credit: REUTERS)
Ukrainians in Kiev rally for Western support. (photo credit: REUTERS)
A Russian army vehicle stands outside a Ukrainian guard post in the Crimean town of Balaclava. (photo credit: REUTERS)
A Ukrainian couple stands next to Russian soldiers in the Crimean town of Balaclava. (photo credit: REUTERS)
Wounded supporters of pro-government forces in Ukraine recover from riots. (photo credit: REUTERS)
US President Barack Obama seen on the phone with Russian President Vladimir Putin discussing crisis in Ukraine. (photo credit: REUTERS)
Ukraine mobilized on Sunday for war and called up its reserves, after Russian President Vladimir Putin threatened to invade in the biggest confrontation between Moscow and the West since the Cold War.Ukraine's security council ordered the general staff to immediately put all armed forces on highest alert, the council's secretary Andriy Parubiy announced. The Defense Ministry was ordered to conduct the call-up, potentially of all men up to 40 in a country that still has universal male conscription.Russian forces who have already bloodlessly seized Crimea - an isolated Black Sea peninsula where most of the population are ethnic Russian and Moscow has a naval base - tried to disarm the small Ukrainian contingents there on Sunday. Some Ukrainian commanders refused to give up weapons and bases were surrounded.Of potentially even greater concern are eastern swathes of the country, where most of the ethnic Ukrainians speak Russian as a native language. Those areas saw violent protests on Saturday, with pro-Moscow demonstrators hoisting flags at government buildings and calling for Russia to defend them.Putin's declaration that he has the right to invade his neighbor - for which he quickly received the unanimous approval of his parliament - brought the prospect of war to a country of 46 million people on the ramparts of central Europe.US Secretary of State John Kerry on Sunday condemned Russia's "incredible act of aggression" in Ukraine and threatened "very serious repercussions" from the United States and other countries, including sanctions to isolate Russia economically. "You just don't in the 21st century behave in 19th century fashion by invading another country on completely trumped up pre-text," Kerry told the CBS program "Face the Nation."Kerry, however, added that Russia still has "a right set of choices" that can be made to defuse the crisis."It's an incredible act of aggression. It is really a stunning, willful choice by President (Vladimir) Putin to invade another country. Russia is in violation of the sovereignty of Ukraine. Russia is in violation of its international obligations," Kerry added.Kerry said US President Barack Obama told Putin in a 90-minute phone call on Saturday that "there will be serious repercussions if this stands. The president ... told Mr. Putin that it was imperative to find a different path, to roll back this invasion and un-do this act of invasion."Kerry said G8 nations and some other countries are "prepared to go to the hilt to isolate Russia" with a "broad array of options" available."They're prepared to put sanctions in place, they're prepared to isolate Russia economically, the ruble is already going down. Russia has major economic challenges," Kerry said, as he also mentioned visa bans, asset freezes and trade isolation as possible steps.