Britons begin voting in most unpredictable election in decades

Cameron's Conservatives and Ed Miliband's opposition Labor Party have been neck and neck in opinion polls for months. 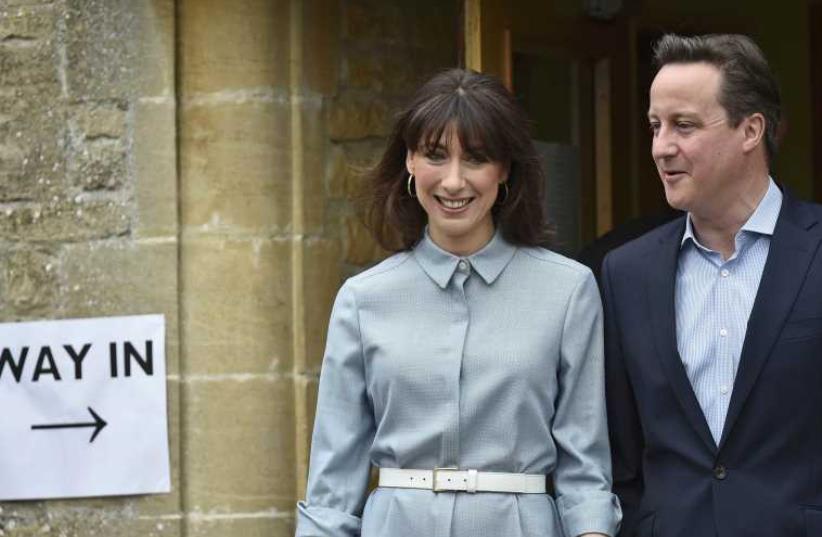 Britain's Prime Minister David Cameron and his wife Samantha leave after voting in Spelsbury, central England, May 7
(photo credit: REUTERS)
Advertisement
LONDON - Britons began voting on Thursday in a tight election that could yield a weak government, push the world's fifth-largest economy a step closer to leaving the European Union and stoke Scottish desires for secession.Britain's prime minister David Cameron cast his vote on Thursday in what is the country's most unpredictable election in decades.Walking with his wife Samantha, Cameron smiled for photographers as he arrived at a polling station in Witney in his constituency. He announced his intention to form the country's first full coalition government since World War II. "I aim to form a proper and full coalition between the Conservatives and the Liberal Democrats,'' he said to a crowd of reporters gathered outside his new residence.Cameron's Conservatives and Ed Miliband's opposition Labor Party have been neck and neck in opinion polls for months, indicating neither will win enough seats for an outright majority in the 650-seat parliament."This race is going to be the closest we have ever seen," Miliband told supporters in Pendle, northern England, on the eve of the vote. "It is going to go down to the wire."Cameron said only his Conservatives could deliver strong, stable government: "All other options will end in chaos."The Conservatives portray themselves as the party of jobs and economic recovery, promising to reduce income tax for 30 million people while forcing through further spending cuts to eliminate a budget deficit still running at 5 percent of GDP.Labor says it would cut the deficit each year, raise income tax for the highest 1 percent of earners and defend the interests of hard-pressed working families and the treasured but financially stretched National Health Service.If neither wins an overall majority, talks will begin on Friday with smaller parties in a race to strike deals.That could lead to a formal coalition, like the one Cameron has led for the past five years with the centrist Liberal Democrats, or it could produce a fragile minority government making trade-offs to guarantee support on key votes.Of seven opinion polls released on the last day before voting, three showed the two main parties tied. Three put the Conservatives ahead by a single percentage point, and one gave Labor a two-point lead.Leading pollster Peter Kellner of YouGov predicted the Conservatives would end up with 284 seats to Labor's 263, with the Scottish National Party (SNP) on 48, Liberal Democrats 31, the anti-European Union UK Independence Party (UKIP) two, Greens one, and Welsh and Northern Irish parties 21.If that proved correct, either of the two big parties would need support from at least two smaller ones to get laws through parliament, as the SNP has ruled out any deal with Cameron.If a durable government could not be formed, Britain could face political instability and even possibly a second election.Cameron has warned that Miliband will only be able to rule with the help of the SNP, a result he says could place the United Kingdom in peril.Miliband has ruled out doing a deal with the nationalists, despite their overtures to form an alliance against the Conservatives.If Cameron fails to win a majority, he could try to strike a deal with the Liberal Democrats, a repeat of the 2010 coalition, and possibly also with Northern Irish unionists and UKIP.If he wins, Cameron has promised an in-out referendum on Britain's membership of the European Union by the end of 2017, a prospect likely to damage the City of London's standing as a global financial center and unsettle markets.Polls opened at 6:00 GMT for the United Kingdom's 48 million voters and close at 21:00 GMT. An exit poll will be published as soon as polls close, and most results are expected in the early hours of Friday.