The United States will work with the UN Security Council on "significant measures" to hold North Korea to account for its launch, US Secretary of State John Kerry said. 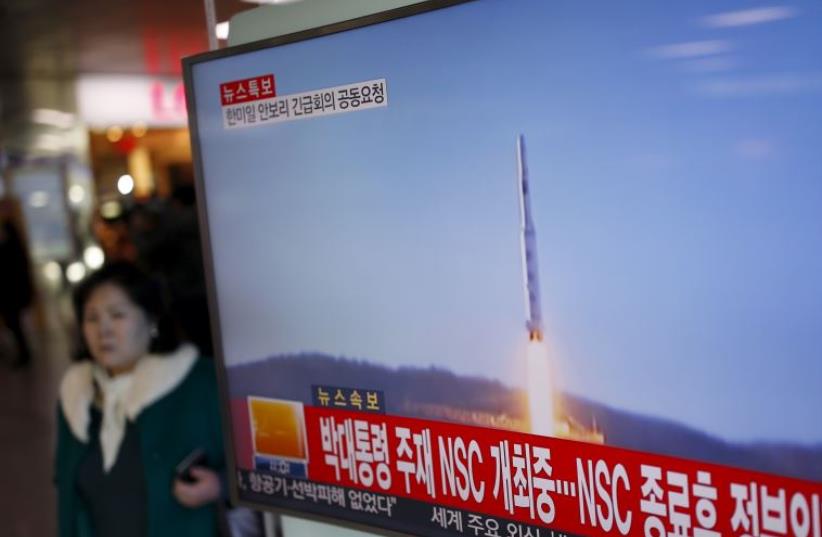 A passenger walks past a TV screen broadcasting a news report on North Korea's long range rocket launch
(photo credit: REUTERS/KIM HONG-JI)
Advertisement
SEOUL/TOKYO - North Korea launched a long-range rocket on Sunday carrying what it has called a satellite, but its neighbors and world leaders denounced the launch as a missile test, conducted in defiance of UN sanctions and just weeks after a nuclear bomb test.United Nations Secretary-General Ban Ki-moon strongly condemned the latest rocket launch and urged it to "halt its provocative actions," Ban's press office said in a statement on Saturday.

"It is deeply deplorable that (North Korea) has conducted a launch using ballistic missile technology in violation of relevant Security Council resolutions on 6 February 2016 despite the united plea of the international community against such an act," the office said.

China's Foreign Ministry expressed regret at a rocket launch by North Korea amid international condemnation, adding that it called on all sides to act cautiously and refrain from taking steps that might further raise tensions on the Korean peninsula."China expresses regret that North Korea, in spite of the pervasive opposition of the international community, insisted on using ballistic missile technology to carry out a launch," said ministry spokeswoman Hua Chunying in a statement posted on the ministry's website.She added that dialogue is the only way to ensure lasting peace and stability in the region.US Strategic Command said it had detected a missile entering space and South Korea's military said the rocket had put an object into orbit, quashing earlier media reports indicating the rocket might have failed in flight."Everything we have seen is consistent with a successful repeat of the 2012 (launch)," said US missile technology expert John Schilling, referring to a previous launch of what the North said was a communications satellite."But it's still too early to tell for sure," said Schilling, who is involved in the "38 North" monitoring project at Johns Hopkins University.The rocket was launched at around 9:30am Seoul time (0030 GMT) in a southward trajectory. Japan's Fuji Television Network showed a streak of light heading into the sky, taken from a camera at China's border with North Korea.North Korea, which last month exploded a nuclear device, had notified UN agencies that it planned to launch a rocket carrying an Earth observation satellite, triggering opposition from governments that see it as a long-range missile test.North Korean state television said it planned a "special announcement" at noon local time (0330 GMT).The UN Security Council was likely to hold an emergency meeting on Sunday to discuss the launch, at the request of the United States, Japan and South Korea, diplomats said.Isolated North Korea had initially given a Feb. 8-25 time frame for the launch but on Saturday changed that to Feb. 7-14, apparently taking advantage of clear weather on Sunday.The United States was tracking the rocket launch and said it did not believe that it posed a threat to the United States or its allies, defense officials said.'FLAGRANT VIOLATION'The United States will work with the UN Security Council on "significant measures" to hold North Korea to account for its launch, US Secretary of State John Kerry said.Calling the launch a flagrant violation of UN resolutions on the country's use of ballistic missile technology, Kerry reaffirmed the "ironclad" US defense commitments to allies Japan and South Korea and called the launch a destabilizing and unacceptable challenge to peace and security.South Korean President Park Geun-hye called the launch an unforgivable act of provocation.Japanese Prime Minister Shinzo Abe called the launch "absolutely unacceptable," especially after North Korea had tested a nuclear device last month."To launch a missile after conducting a nuclear test goes against the UN resolution. We will respond resolutely, coordinating closely with the international community," he told reporters.Japan had said that it was ready to shoot down the rocket if it threatened the country, but did not take any action to do so, Japan's NHK reported.A commentary by China's state-run Xinhua news agency on Sunday called for calm. Beijing is Pyongyang's main ally, although it disapproves of its nuclear weapons program."The most pressing task at present is that all relevant sides should proceed from the standpoint of safeguarding peace and stability on the peninsula and deal with the issue calmly to prevent the situation from continuously deteriorating or even spinning out of control," it said.North Korea has said that its most recent nuclear test, its fourth, was of a hydrogen bomb. However, the United States and other governments have expressed doubt over that claim.North Korea is believed to be working on miniaturizing a nuclear warhead to mount on a missile, but many experts say it is some time away from perfecting such technology.It has shown off two versions of a ballistic missile resembling a type that could reach the US West Coast, but there is no evidence the missiles have been tested.North Korea says it has a sovereign right to pursue a space program.
Advertisement
Hot Opinion