Up to 50 refugees found dead in truck in Austria

Investigations were underway in Austria and Hungary after the bodies were discovered. 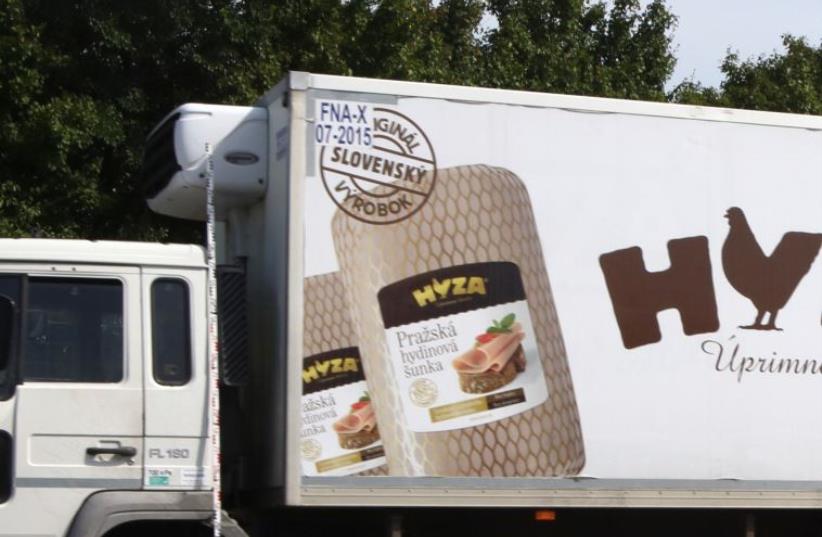 A truck in which up to 50 migrants were found dead, stands parked on a motorway near Parndorf, Austria
(photo credit: REUTERS)
Advertisement
VIENNA - As many as 50 refugees were found dead in a parked truck in eastern Austria near the Hungarian border on Thursday, and German Chancellor Angela Merkel said the discovery had shaken European leaders attending a Balkans summit.Police made the grisly discovery in the 7.5-tonne truck stopped on the A4 motorway near the town of Parndorf, apparently since Wednesday, Hans Peter Doskozil, police chief in the province of Burgenland, told a news conference.He said he could not put an exact figure on the number of victims, whose bodies had begun to decompose."We can assume that it could be 20 people who died. It could also be 40, it could be 50 people," he said.Merkel told a news conference at the summit on the West Balkans in Vienna: "We are of course all shaken by the appalling news. This reminds us that we must tackle quickly the issue of immigration and in a European spirit - that means in a spirit of solidarity - and to find solutions."Tens of thousands of people, mainly from Africa and the Middle East, have put to sea this year in the hope of reaching Europe, often dangerously packed into small vessels that were never designed to cross the Mediterranean.Those who make it ashore and others traveling by land have increasingly tried to make their way north via the Balkans, causing tension among countries along the route.Hungary plans to reinforce its southern border with helicopters, mounted police and dogs, and is also considering using the army as record numbers of migrants passed through coils of razor-wire into Europe.Investigations were underway in Austria and Hungary after the bodies were discovered. The truck had Hungarian number plates, a Hungarian official said.Austrian Interior Minister Johann Mikl-Leitner called it "a dark day" and underscored Vienna's demand that the European Union adopt a way to distribute a wave of refugees fairly so that they would not have to turn to human traffickers."This is a signal on the European level to act as quickly as possible here," she told the news conference, adding controls on international trains and border areas had been stepped up.QUOTAS"It will certainly be a central task to protect our outer borders better," European Commissioner Johannes Hahn told the conference, reiterating that Brussels will propose within weeks a fresh look at the situation."We will have another go at quotas. I hope that in the light of the most recent developments now there is a readiness among all the 28 (member states) to agree on this," he said.German Foreign Minister Frank-Walter Steinmeier, whose country expects 800,000 asylum seekers this year, said a fair distribution of refugees was needed to ensure support in countries taking in the bulk of migrants."That is why it is so important to make progress here. We need the same standards and processes, we need the commitment of all states to carry out early registration," he said.His Austrian counterpart Sebastian Kurz said: "If we are not able to find a quick European solution here, then more and more countries like Hungary and Denmark - who are already doing it - will try to solve this crisis for themselves on their own with individual measures and their own initiatives."It won't work and above all it threatens our European idea of having open borders and with that proper security at the EU's outer borders."Serbian Foreign Minister Ivica Dacic put the onus on EU countries to find a better way to handle the influx of refugees."So you have a problem but you are asking us, Serbia, to come up with the action plan for migrants. You should come up with an action plan first and then ask us to come up with our plan," he told the conference.