US soldier arrested on terrorism charges, attempting to assist ISIS

Ikaika Erik Kang was arrested by the FBI on Saturday following a year-long undercover probe, according to the FBI. 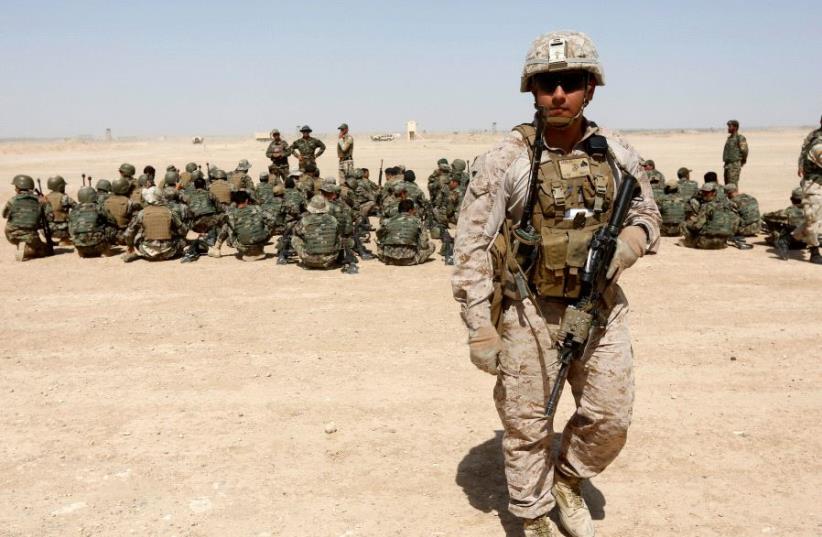 A US Marine walks near Afghan National Army (ANA) soldiers during training in Helmand province, Afghanistan, July 5, 2017.
(photo credit: REUTERS/OMAR SOBHANI)
Advertisement
A US Army sergeant stationed in Hawaii after serving in Iraq and Afghanistan was charged on Monday with attempting to provide material support to Islamic State extremists, including a drone aircraft and combat training instructions.

Ikaika Erik Kang, 34, an air traffic control specialist who also had extensive military training in hand-to-hand combat, was arrested by the FBI on Saturday following a year-long undercover probe, according to the Federal Bureau of Investigation.

An FBI affidavit filed in court with the criminal complaint summarized a lengthy sting operation employing several undercover agents and other "confidential human sources" who posed as Islamic State operatives and sympathizers.

As described in the affidavit, the sting drew to a climax as Kang swore a pledge of loyalty to Islamic State leader Abu Bakr al-Baghdadi, then proceeded to make training videos for the extremist group, also known as ISIS, which has seized large swaths of territory in Syria and Iraq.

He was taken into custody that same day, the affidavit said. Hours earlier, according to the FBI, he had purchased a GoPro drone aircraft and camera kit that he intended to be sent to the Middle East to help ISIS fighters evade enemy tanks in battle.

Kang also is accused of attempting to furnish ISIS with classified and other sensitive military records that would have assisted the group in its combat tactics. But the FBI said none of those documents made it to ISIS.

Kang, a member of the 25th Combat Aviation Brigade, 25th Infantry Division, was assigned to the Army's Schofield Barracks, a major garrison on the island of Oahu.

He is believed to be a "lone actor" with no ties to anyone who might pose a threat to Hawaii, the FBI said. He was brought to the FBI's attention by the Army last year, officials said.

At a brief court appearance on Monday, he was presented with the charges against him and ordered to remain in federal custody pending a July 13 detention hearing. He entered no plea.

Kang's attorney, Birney Bervar, told reporters afterwards that he knew "very little" about the case, having spoken only briefly to his client just before the hearing as he was handed a copy of the complaint.