US officials: Russia didn't give downed jet's flight plan to US

The Pentagon did not immediately comment on Putin's remarks that "we informed our American partners" about when and where Russian aircraft would be operating. 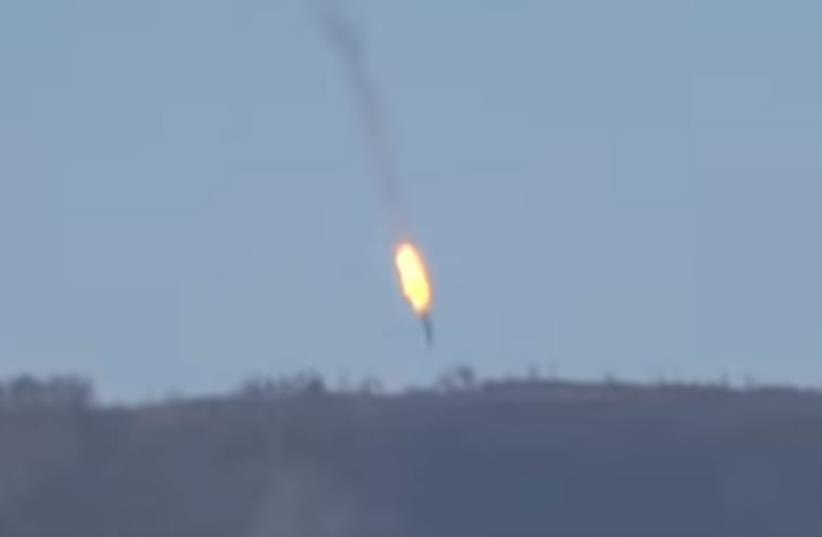 Screenshot from video purporting to show Turkish F-16s shooting down warplane‏
(photo credit: screenshot)
Advertisement
WASHINGTON - Russia did not inform the US military of its jet's flight plan before Turkey shot it down on Tuesday, despite assertions to the contrary by Russian President Vladimir Putin, two US officials told Reuters on Friday, speaking on condition of anonymity.Putin has suggested some degree of US culpability in the aftermath of the incident, even hinting that the United States might have given detailed Russian operational plans to Turkey ahead of time.Addressing reporters in Moscow on Thursday, Putin said "we informed our American partners" about when and where Russian aircraft would be operating. It was "precisely" then that the Turkish air force shot down the Russian warplane, Putin said."The question arises: Why did we pass on that information to the Americans," Putin asked.The Pentagon did not immediately comment on Putin's remarks but in the past acknowledged that Russia has given basic notification to the US-led coalition ahead of some operations, like a Nov. 17 launch of cruise missiles.Such communication is aimed at preventing an accidental clash between the former Cold War foes as they carry out parallel bombing campaigns inside of Syria.The two US officials, who spoke on condition of anonymity, said, however, that Russia had not passed along the kind of granular operational details suggested by Putin in his public remarks. The extent of any communications between the US and Russian militaries before or after the incident was not immediately clear.Turkey's shoot-down of the Russian jet was one of the most serious clashes between a NATO member and Russia, and raised the stakes in Syria's nearly five-year-old civil war.US-led coalition forces have struck Islamic State in Syria and Iraq. They accuse Moscow of focusing its firepower mainly on opponents of Syrian President Bashar al-Assad, a longtime Russian ally.Turkey, which has long sought Assad's ouster, said that Turkey did not go looking to shoot down a Russian jet but acted after it strayed into Turkish air space. Turkish President Tayyip Erdogan called it an "automatic reaction" to standing instructions given to the military.Moscow insists the jet never left Syrian air space.The incident has worsened the outlook for the Syrian peace process, dashing recent optimism following the Group of 20 meeting in Turkey.