President Putin said Trump in reality was a different person from the one seen on TV. 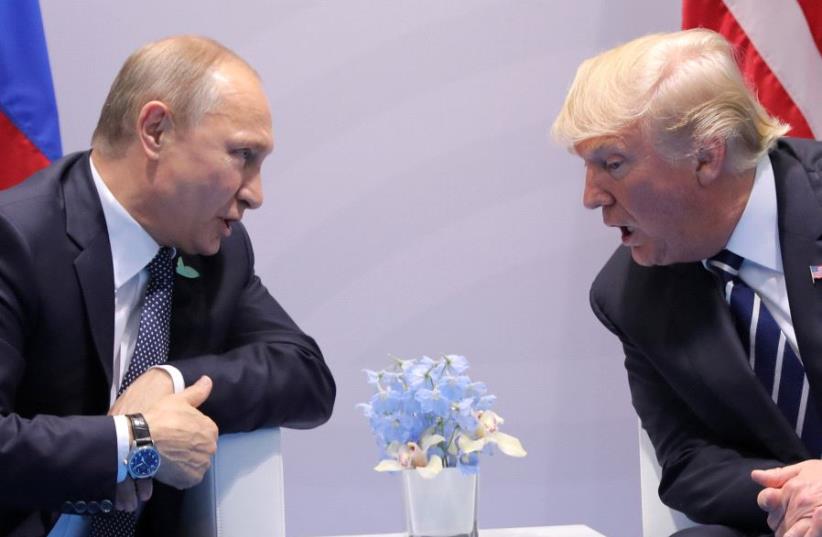 U.S. President Donald Trump speaks with Russian President Vladimir Putin during the their bilateral meeting at the G20 summit in Hamburg, Germany July 7, 2017.
(photo credit: REUTERS/CARLOS BARRIA)
Advertisement
US President Donald Trump described his meeting with Russian President Vladimir Putin on Friday at the G20 Summit as "tremendous" during his press conference with British Prime Minister Theresa May in Hamburg on Saturday.Putin said on Saturday, during a news conference, that "my impression is that Trump agreed" with his arguments that Russia did not interfere with the US elections in 2016 before adding that it would be, "best to ask him."   Putin said the two leaders agreed to work together on cyber security and said he thought Trump in reality was a different person from the one seen on TV. He also claimed to have established a working relationship with US President  Trump and thought there were grounds to believe at least partial cooperation with Washington could be achieved.Sitting alongside British Prime Minister Theresa May, the US leader described his relationship with the British premier as "very special." He also told reporters he would be going to London in the future. Trump stated that no country could be closer to the US then the UK and that he and May are working on a trade deal that will be "a very, very big deal". The G20 meeting was held as thousands of German protestors chanted and held signs condemning it."This is an elitist club," said German protestor Martin Bierloch, "the most powerful countries which are essentially involved in turning the world into what it is."The protesters were peaceful and condemned the over-night violence of the so called Black Bloc anarchists against German police and private property.