Beijing and Washington are locked in a trade war that has seen them impose increasingly severe rounds of tariffs on each other's imports. 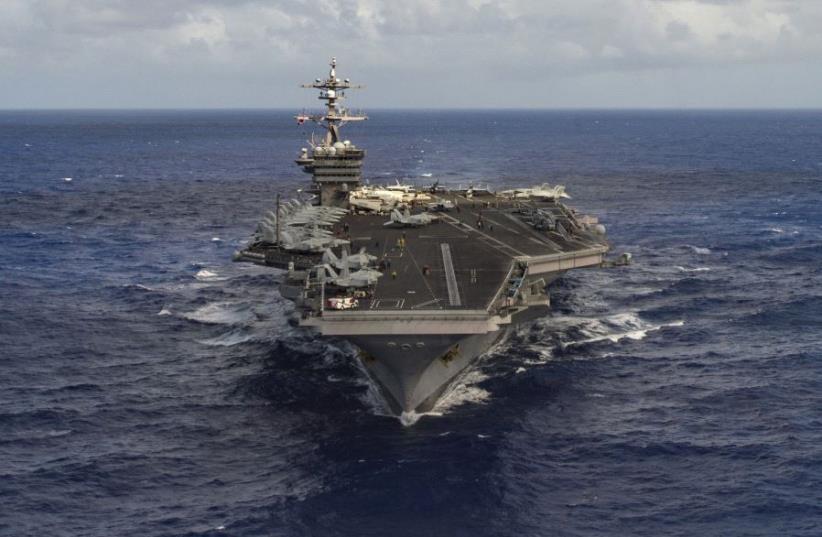 The aircraft carrier USS Carl Vinson (CVN 70) transits the Pacific Ocean January 30, 2017. US Navy Photo by Mass Communication Specialist 3rd Class.
(photo credit: TOM TONTHAT/HANDOUT VIA REUTERS)
Advertisement
A US Navy destroyer sailed near islands claimed by China in the South China Sea on Sunday, a US official told Reuters, potentially angering Beijing at a time of tense relations between the two countries.Beijing and Washington are locked in a trade war that has seen them impose increasingly severe rounds of tariffs on each other's imports.The official, speaking on condition of anonymity, said the destroyer Decatur traveled within 12 nautical miles of Gaven and Johnson Reefs in the Spratly Islands.The operation was the latest attempt to counter what Washington sees as Beijing’s efforts to limit freedom of navigation in the strategic waters, where Chinese, Japanese and some Southeast Asian navies operate.China’s claims in the South China Sea, through which about $5 trillion in ship-borne trade passes each year, are contested by Brunei, Malaysia, the Philippines, Taiwan and Vietnam."We conduct routine and regular freedom-of-navigation operations, as we have done in the past and will continue to do in the future," the US official added.China's foreign ministry did not respond immediately to a request for comment.The United States has criticized China’s construction of islands and military facilities in the area and is concerned they could be used to restrict free nautical movement.The US military has a long-standing position that its operations are carried out throughout the world, including in areas claimed by allies, and are separate from political considerations.The latest move comes at a particularly tense time in relations between the United States and China.Friction between the world's two biggest economies is now moving beyond trade, with US President Donald Trump accusing Beijing this week of seeking to interfere in congressional elections, marking a new phase in an escalating campaign by Washington to put pressure on China.China recently denied a request for a U.S. warship to visit Hong Kong and this month Beijing postponed joint military talks in protest against a US decision to impose sanctions on a Chinese military agency and its director for buying Russian fighter jets and a surface-to-air missile system.In May two US Navy warships sailed near South China Sea islands claimed by China.