WATCH: Taliban release video of handover of US sergeant

The video shows Bergdahl, clean shaven, dressed in a white salwar kameez and with a shaved head, waiting in a white pick-up truck.

By REUTERS
US Army Sergeant Bowe Bergdahl (2nd R, back facing) is led to a waiting Blackhawk helicopter during his release at the Afghan border.
(photo credit: REUTERS)
Advertisement 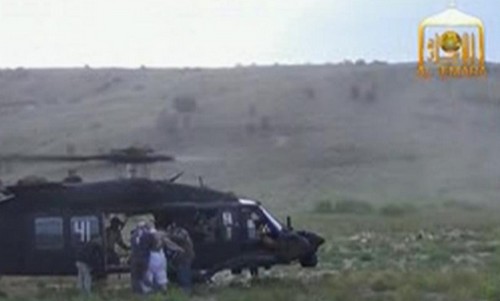 The Taliban have released a 17-minute video showing the handover of US Army Sergeant Bowe Bergdahl to the American military close to the Afghan border with Pakistan, in an exchange for five militants held at US jail Guantanamo Bay, Cuba.The video shows Bergdahl, clean shaven, dressed in a white salwar kameez and with a shaved head, waiting in a white pick-up truck as Taliban militants outside lean in to talk to him. He appears to blink in the bright light, assenting as they speak.The video's authenticity could not be independently verified. It shows armed gunmen dotting the hills around the valley, as Blackhawk helicopters overhead draw closer to the meeting point. The Taliban reporter speaking over the clip explains:"We told them there are 18 armed fighters and the Americans said that's alright," the male voice said.As one of the helicopters lands throwing up a cloud of dust, Bergdahl is led to his rescuers by two men, one leading him by the hand and another waving a white cloth crudely tied to a wooden stick.Most of the Taliban have their faces covered with scarves, while Bergdahl wears his over his shoulders.They are greeted by three men who shake their hands and lead Bergdahl by the arm to the helicopter. The aircraft takes off and the message in English flashes up: "Don' come back to Afghanistan".Five years after he was captured by Afghan militants, Bergdahl was freed at the weekend in exchange for five militants held at Guantanamo Bay. The 28-year-old is now in a military hospital in Germany, undergoing physical and mental assessments.The five militants were put in the custody of the tiny Gulf emirate of Qatar, where they are to remain for a year. The video also showed their arrival in Qatar, where they are greeted with warm embraces, while a Taliban victory song is played in the background.The initial euphoria over his release has been clouded by claims by fellow soldiers who say Bergdahl had deserted his post in 2009. And some members of Congress say the president broke the law by not giving them advance notice of the swap.