Who is in line to replace Ban Ki-moon at helm of the United Nations? 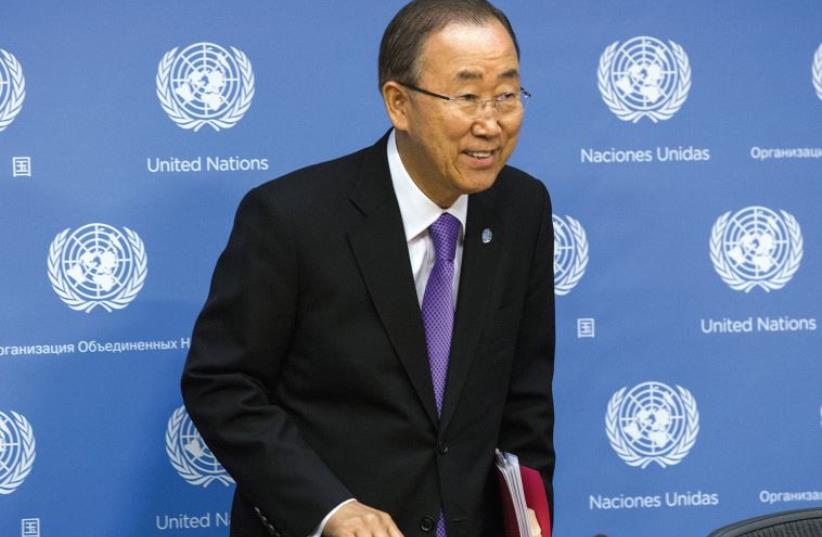 UNITED NATIONS Secretary General Ban Ki-moon arrives to address media at the UN headquarters
(photo credit: REUTERS)
Advertisement
Two or three front runners for the position of United Nations Secretary-General have emerged after 18-hours of unprecedented General Assembly town hall meetings with nine candidates, though the race is set to widen with more nominations expected, several diplomats said.The current UN Secretary-General Ban Ki-moon steps down at the end of the year after two five-year terms, and some predict up to 15 candidates could be vying for the job by the time the Security Council hold's its first informal straw poll in July.Former Portugal Prime Minister Antonio Guterres and former New Zealand Prime Minister Helen Clark were deemed by some diplomats, speaking privately, to be leading the pack after each nominee was quizzed for two hours by the General Assembly.The third candidate to watch was not so clear. Diplomats cited performances by UN cultural group UNESCO Director-General Irina Bokova of Bulgaria, former Serbian Foreign Minister Vuk Jeremic and former Slovenian President Danilo Turk."It's too early to rule anybody in or out, but I think there are at least two of three good candidates already amongst the ones we have seen," said Saudi Arabia's UN Ambassador Abdallah Al-Mouallimi.Ukraine's UN Ambassador Volodymyr Yelchenko, currently an elected member of the 15-member Security Council, had a similar assessment: "I would say that approximately three out of nine I would call front runners."For 70 years the U.N. Security Council has met behind closed doors to choose the world body's eight male secretary-generals, who were then rubber-stamped by the 193-member General Assembly. The ninth U.N. chief will be chosen the same way, though for the first time candidates have been publicly nominated.Ultimately the council's veto powers - the United States, Britain, France, Russia and China - have to agree on a candidate, but there is no requirement for them to pay attention to the popularity of nominees with the General Assembly.They could, however, turn to betting odds. British bookmaker William Hill has Clark as the favorite, followed by Jeremic, Bokova, Guterres and Turk. Former Macedonian Foreign Minister Srgjan Kerim comes next, followed by Moldova's former Foreign Minister Natalia Gherman; former Croatian Foreign Minister Vesna Pusic and Montenegro Foreign Minister Igor Luksic.Four of the nine candidates are women amid a push by 56 UN states and civil society groups for the first female secretary-general to be chosen.Argentina's Foreign Minister Susana Malcorra, who has served as Ban's Chef de Cabinet, is also expected to be nominated. Others said to be eyeing the job include Colombia's Foreign Minister Maria Angela Holguin, former Australian Prime Minister Kevin Rudd and Slovakia's Foreign Minister Miroslav Lajcak."We urge now every country and every candidate ... to come forward and come forward quickly," said U.N. General Assembly President Mogens Lykketoft of Denmark.Under an informal tradition of rotating the top post between regions, it is Eastern Europe's turn and six of the current nominees are from there.Moscow backs the regional rotation, but when asked if Russia would veto a non-Eastern European candidate U.N. Ambassador Vitaly Churkin said: "No, we are not going to ... There are respected, qualified people so we have to be objective."A senior council diplomat, speaking on condition of anonymity, said that if Russia wanted to choose an Eastern European to be the next UN chief then "they need to make sure there is a better candidate or a choice of better candidates.""In terms of expectations I think Bokova was disappointing," the diplomat added.