Why does Germany’s young generation hold negative views of Israel? 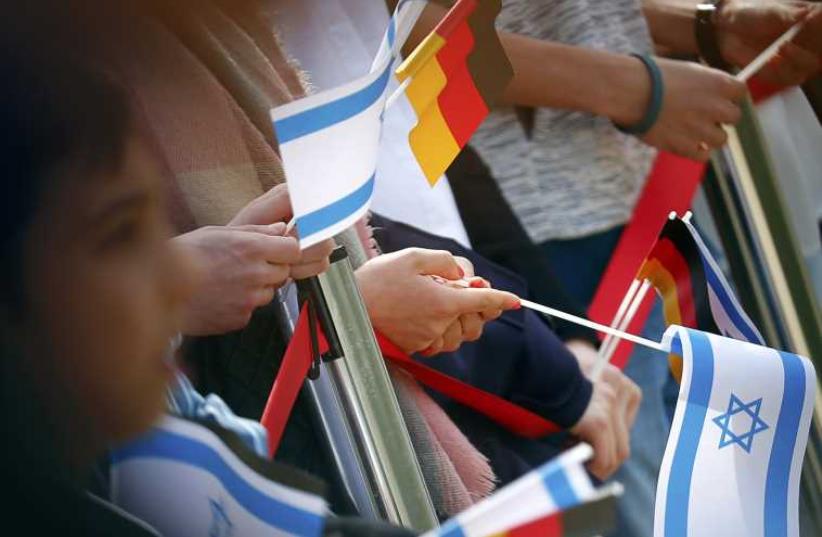 German and Israeli flags
(photo credit: REUTERS)
Advertisement
The peerless Middle East historian Bernard Lewis wrote nearly 30 years ago in his groundbreaking book Semites and Anti-Semites that German guilt after the Holocaust contributed to the positive response to the founding of Israel. However, he warned presciently that “such feelings are a dwindling asset to Israel, and must inevitably die away as the memory of Nazi crimes recedes into the past.”Lewis’s words carry great urgency for today’s 50th anniversary of diplomatic reconciliation between Germany and Israel. In an email to The Jerusalem Post, Israel’s Ambassador to Germany Yakov Hadas Handelsman said the “young generation will stand in the center of this year’s anniversary.”Putting aside the scores of articles about young Israeli artists living in Berlin as an implied sign of Jewish forgiveness for the Shoah, there is a growing lack of reciprocity from the German side. According to an October Bertelsmann Foundation study, a majority of Germans in the important 18-29 age group holds a negative view of Israel. In stark contrast to the Bertelsmann finding, a January Konrad Adenauer Foundation study showed 81% of Israelis desire closer relations with Germany.How does one interpret this disconnect? Zvi Rex, an Israeli psychoanalyst famously remarked with piercing sarcasm that the “Germans will never forgive the Jews for Auschwitz.” While pathological Holocaust guilt surely plays a factor in the negative view toward Israel, the young generation has also been inculcated in a radical pacifist culture.Many young Germans simply cannot internalize Israel’s self-defense wars against lethal anti-Semitic terroristic organizations such as Hamas, Hezbollah, and Islamic Jihad. It seems to pain sizable numbers of young Germans to extend the German slogan “Never Again Auschwitz” beyond the frontiers of their borders to the Jewish state.An additional explanation for pejorative views toward Israel is the repentant new generations that serve, as the writer Wolfgang Pohrt described, as Israel’s probation officers to prevent “their victims from relapsing.” Put simply, large numbers of Germans feel they have worked through the crimes of the Holocaust and are now positioned to provide didactic lessons to Israelis about the need for peace.German anti-Israel resentment among all walks of life in the Federal Republic reach higher peaks when Israel pursues its own security interests independent of German politicians calling for restraint.Such feelings reached a head last year surrounding Operation Protective Edge. The German-Jewish historian Michael Wolffsohn told the daily Tagesspiegel on Sunday that he is unsettled by the discussions of Israel, because they show “an increasing detachment, aggressiveness, and hatefulness.”During Operation Protective Edge, the German Left Party’s Solid Ruhr youth branch organized a pro-Palestinian demonstration in which activists tossed bottles and rocks at pro-Israel protesters. Some demonstrators screamed “Burn, shitty Jew.” The Left Party is the largest opposition party in the Bundestag. To be fair, the Berlin Left Party Solid branch urged Solid Ruhr in North Rhine-Westphalia to cancel the anti-Israel hate festival.The growing urge to impose discipline and punishment on Israel has permeated a large part of Germany’s left-leaning civil society. Rudolf Dressler, a former social democratic party(SPD) ambassador to Israel between 2000-2005, called in early May for “reducing trade with Israel” to pressure the Netanyahu administration to make concessions in the peace process. Dressler undoubtedly sees himself as a friend of Israel and would reject any continuity between Nazi boycotts of Jewish businesses and calls for economic sanctions on the Jewish state.Writing in the Badische Zeitung, a paper included in the Simon Wiesenthal’s 2013 list of anti-Semitic/anti-Israel slurs, Inge Günther, a German reporter for the Frankfuter Rundschau—a paper affiliated with the SPD—urged that Israeli products from the disputed territories be labeled as a form of discouraging settlement activity. Günther, a correspondent in Israel who covered the 50th anniversary, wrote that “the world has to make clear that Israel has to pay a price.”What is frequently overlooked is that the beginning of the campaign to demarcate Israeli products can be found in neo-Nazi legislation from the city council of Schwerin in 2012. It is unclear whether Günther was aware that her remedy for punishing Israel mirrors a local NPD neo-Nazi legislative act.One test for the young German generation will be its posture toward the boycott, divestment, and sanctions (BDS) movement against Israel. Will young Germans recognize parallels with their country’s first stage in the Holocaust, namely economic measures targeting Jews? Lewis wrote, “There can be no doubt that one of most important sources of support for Israel in the period following the fall of Hitler was guilt, using that word in the modern sense, as a psychological state rather than a legal fact.”As many German commentators have noted, including Henryk M. Broder, a columnist for Die Welt, German-Israeli relations cannot flourish on a foundation of guilt, whether pathological or repentant. The embrace of liberty, Israel’s core security interests, democratic values—and, yes, a hip Israeli youth culture—can help young Germans overcome their negative feeling toward Israel.Historian Wolffsohn, who served in the Israeli Army, described the German-Israel relationship as “strange friends.”Perhaps young Germans—on a broader scale — will view Israelis and the Jewish state as friends at some point in the future.Benjamin Weinthal reports on European affairs, and is a fellow at the Foundation for Defense of Democracies.