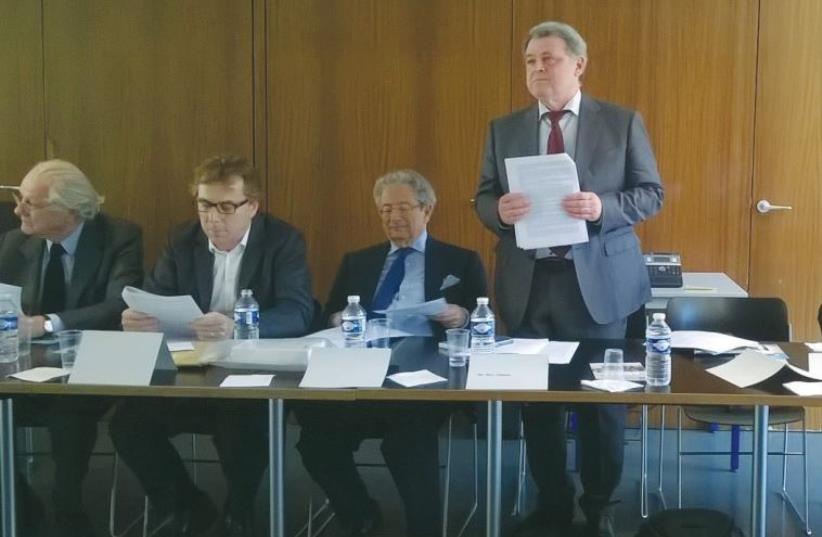 THE ANNUAL RUSSIAN Holocaust University Essay award ceremony in Paris on Thursday was moved from its location at UNESCO headquarters, over anger at the world body’s resolution in April denying any Jewish ties to the Temple Mount or the Western Wall.
(photo credit: RINA BASSIST)
Advertisement
PARIS – The Simon Wiesenthal Center moved the location of its annual Russian Holocaust University Essay award from the headquarters of its co-sponsor UNESCO, in protest over its resolution in April denying Jewish ties to the Temple Mount and the Western Wall in Jerusalem.“Ever since the Palestinians were accepted to UNESCO in 2011, things have changed,” Dr. Shimon Samuels, director of international relations of the Wiesenthal Center, told The Jerusalem Post. “It used to be a favorable arena for us, especially at the World Heritage Committee. But the Palestinians have launched a theft of the Jewish narrative. The Palestinians are trying to deny the Jewish narrative, because the validation of the Palestinian narrative depends on deleting the Jewish-Israeli one. It’s a replacement ideology.”The Wiesenthal Center cooperates closely with UNESCO on different programs. The Russian Holocaust University Essay award is one of these co-projects, conceived in order to strengthen Holocaust studies in Russia and former Soviet Union states.Since its establishment 12 years ago, many countries make it a point of participating to demonstrate their support.This year as well, ambassadors and deputy ambassadors from dozens of countries participated at the ceremony held at the Paris Holocaust Memorial, including representatives from Russia, Armenia, Germany, Belarus, France, the US and of course Israel.The five laureates this year include graduates from Moscow, Erevan in Armenia, the Republic of Buryatia (Russia), Minsk of Belarus, and Saratov from Russia, dealing with a variety of issues such as the interpretation of the Holocaust by Russian mass media, teaching the Holocaust in the Russian education system, Holocaust denial in Belarus, and more.The students who were chosen are all engaged in researching and teaching the Holocaust for the long term.Marek Galstyan of Armenia, who worked on the issue of righteous among the nations, told the audience that he considers his research much more than just an academic study. “At present, I am working on finding information about another person, who may be awarded the title of righteous,” he said. “He is Henrik Bakhtiykan, cousin of my grandfather, whom my grandfather told me about.”Another student, Nikita Gordeev from Saratova, has been working on historical revisionism in the structure of extremist ideology. In his presentation, Gordeev noted that “there are currently about 10 organizations in the Russian Federation that are banned by the court for carrying out extremist activities – groups which position themselves as neo-pagan,” a fact, he explained, which highlights the ongoing trends of Holocaust denial.Israeli deputy ambassador to UNESCO, Yossi Mustaki, emphasized at the meeting the importance of this award, in raising public awareness to the lessons of the Holocaust.“We consider this award as an excellent means to increase the awareness of young people – school students, students in universities, and youngsters in general – to the issue of the Shoah and to its lessons,” he said. “It’s a very positive and constructive way to encourage the creativity and activities of students who specialize in these areas of research. From our side, it is important that Israel recognizes this project and encourages similar ones across the world. Some of our delegations initiate and support projects in the same vain, sometimes for younger children. We really congratulate the Wiesenthal Center for this essential educational program, and wish to see more initiatives of this kind.”Concerning the issue of changing the location of the ceremony, Mustaki said that “I can certainly understand the decision [due to] the anger within the Jewish world, as in Israel, over the outrageous UNESCO board resolution. Each one reacts in his/her own manner – and this was apparently the way the Wiesenthal Center chose to react.”