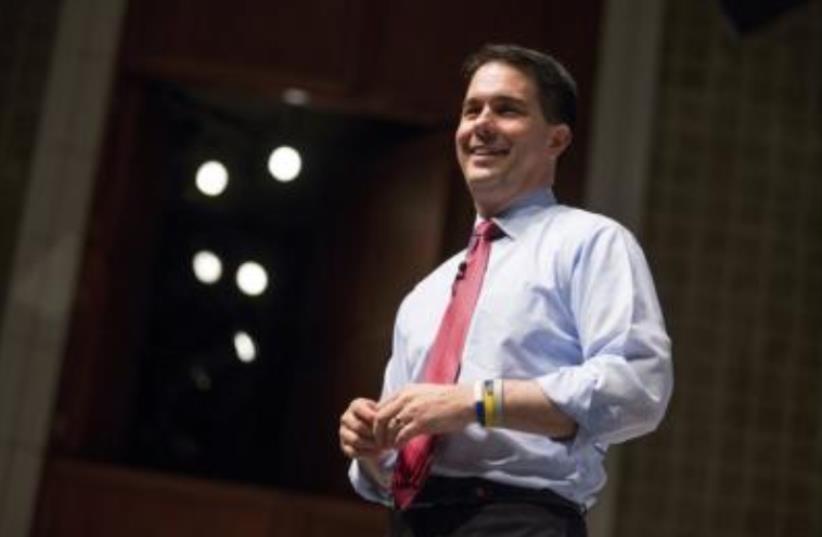 Scott Walker
(photo credit: REUTERS)
Advertisement
When Wisconsin Gov. Scott Walker, in Israel heading a Wisconsin trade mission, was last in the country in May 2015, he sat down with Prime Minister Benjamin Netanyahu for a meeting dominated by weighty diplomatic issues such as Iran.Back then Walker was on the cusp of declaring his candidacy for the Republican Party’s presidential nomination, and he was one of a parade of presidential hopefuls that year beating a path to Jerusalem. Although he would drop out of the race a few month later in September, at least in May he was touted by the media as one of the front-runners in a crowded pack not yet dominated by Donald Trump.When Walker, who was in the country from Sunday through Friday, met with Netanyahu, Iran was discussed, but the focus was on more mundane issues such as possible partnerships between Israel and Wisconsin on water and cybersecurity issues.Nevertheless, any time Netanyahu meets an elected US officials – and he makes it a policy to try and meet every US governor, senator or congressman who visits the country – Iran is discussed.Asked during an interview what he thought the prime minister expected the governor of Wisconsin to do regarding Iran, Walker said, “Part of it is just hearing him out.... [to]reinforce to the president and Congress our support for Israel, and the concerns many of us have about the Iran deal, and about the impact it has not only as an existential threat to the State of Israel, but ultimately what that will mean to the United States as well.”Though Wisconsin has a relatively small Jewish population that is concentrated in Milwaukee and Madison, Walker – who is up for reelection in 2018 – said there is strong support for Israel beyond the Jewish community, especially among Evangelical Christians.Nevertheless, he said, Israel is certainly not a “driving force” in gubernatorial elections, where the fundamental issues are local ones: “prosperity, jobs, the status of the economy, investment in education, and support for access to healthcare.”Walker dropped out of the 2016 presidential nomination competition and urged others in the crowded pack to do the same so the Republican Party could rally around one candidate with a “positive, conservative” message to defeat Trump, whose negative tone and personal attacks Walker blasted after he left the race.Asked whether he would ever consider another presidential bid, Walker said, “I certainly wouldn’t do it as governor. One of the lessons I learned is that to be a good and effective governor you have to focus your energy on that, and that is what I am going to do going forward into the next term.”But first Walker, in office since 2011, has to win another term.He said he was not concerned that his efforts, or those of other Republican governors up for reelection next year, will be hurt by the divisiveness of the Trump presidency.“I think people want to talk about issues that matter to them at the state and local level, and those are areas where we are making inroads and have positive results. If we talk about those things, we’ll do exceptionally well,” he said.One of the local issues Walker focused on during his visit here was to lure Israeli companies dealing with water – from water management to drip irrigation – to set up shop in Milwaukee.Unlike Israel, he pointed out, Wisconsin has an abundance of water, surrounded by two of the Great lakes, with the Mississippi River running through the state, and home to some 15,000 lakes.This has turned Milwaukee into a world center for companies involved in water issues, and said it would be a good place to land for Israeli water-related firms that are looking to build a market in North America.