They had just finished having dinner with friends in Nice’s Old City as the fireworks were about to end. 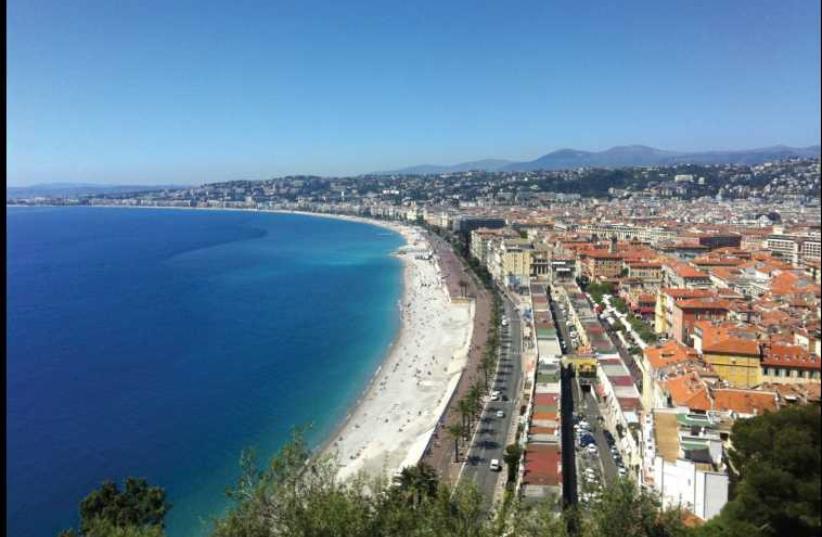 THE SOUTHERN coast of France, as seen from Nice
(photo credit: LAURA KELLY)
Advertisement
NEW YORK - On France’s Bastille Day 2016, Evelyne Platnic Cohen and her husband, who live in Paris, were visiting Nice and the French riviera. They had just finished having dinner with friends in Nice’s Old City as the fireworks were about to end. “We stayed away from the crowd and decided to walk our friends to their car,” Platanic Cohen told The Jerusalem Post. “That was the right choice to make because if we hadn’t, we would have been under the truck.”When Platanic Cohen and her husband left the parking lot, they walked back to their hotel through the Promenade des Anglais. That’s when they heard screaming and saw people running around in panic. They entered a restaurant and waited to understand what was happening.“For at least an hour and 15 minutes we had no idea what was going on,” she explained. “There was no system to warn people of what was happening or telling them what to do.”“We felt as if there were different perpetrators committing different attacks because people were coming from all different directions,” she recalled. “It was a war zone scene.”Another witness, who did not wish to be named, told the Post that the scene was “extremely violent and horrifying”.“We saw bodies,” the witness, who lives in Nice and was in a car on the way home, said, with a trembling voice. “We stayed shocked, not understanding. We didn’t know what to do.”“There was a mother with her baby in her arms, screaming, full of blood,” they recalled. “We wanted to take her to the nearby hospital but she was better off walking because we were stuck in traffic and couldn’t move.”Both the anonymous witness and Platanic Cohen said they knew early on that the truck hitting people was no accident. “The Promenade des Anglais is as large as the tayelet in Tel Aviv, he was going straight and fast and wasn't trying to avoid people,” the witness told the Post. “I usually have faith in humanity but I have to tell you that I’m struggling with that today,” they said. “You ask yourself how can a person, a human being, go crazy to that extend.”Evelyne Platanic Cohen told the Post she felt that the authorities were “going through something they were not used to.” “It was out of the ordinary,” she said. “It wasn't an accident, you could feel that something very bad was happening.”“I felt like I was already prepared for it. As if we already lived through this movie or we expected to live it anyway,” Platanic Cohen continued. “I think unfortunately we have to get used to this.”The anonymous witness added that they had a false sense of security in Nice because they are not in the capital, but after the deadly attack that cost some 80 people their lives, they feel they are no longer safe in France anymore. “When I come to Israel on vacation I feel much safer than in France,” they added.