Fateh is an upgrade over the 29-meter Ghadir class of subs that the Iranians have been building for years. 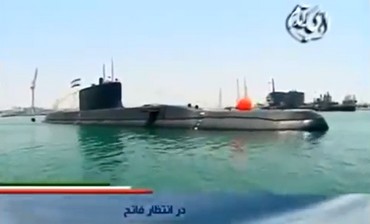 The world captured its first glimpse of a new Iranian submarine before the Islamic Republic's official unveiling. According to IMS Jane's Defence Weekly, the new Fatah-class submarine was briefly shown in a video montage that Iranian television aired.The clip, which the regime likes to broadcast in order to stir national pride in the country's military achievements, shows a submarine with a 40-meter waterline that is docked at the Bostanu shipyard.According to Jane's, the Fateh is an upgrade over the 29-meter Ghadir class of subs that the Iranians have been building for years. The original footage aired on Iranian television last week.