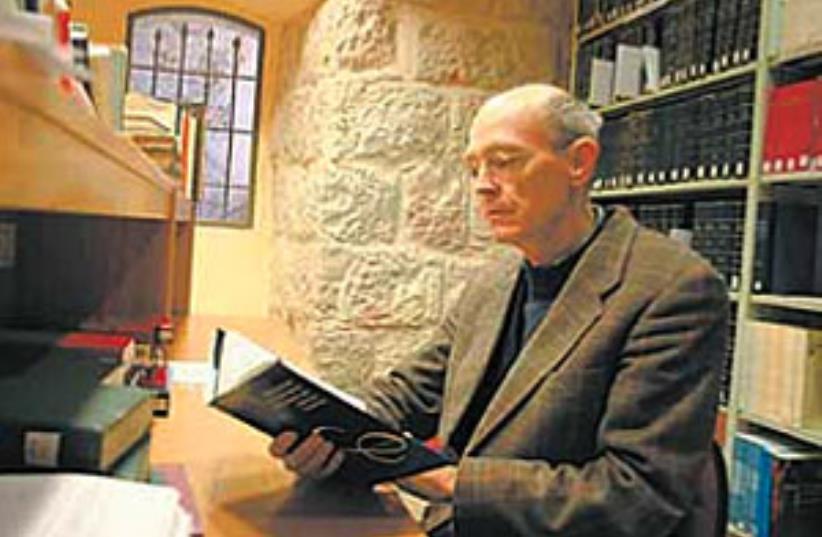 Nearly two decades after she wedded Byzantine Emperor Theodosius II in 421, rumors that she had been unfaithful forced Empress Eudocia to flee for her life. Theodosius dispatched an assassin after his consort, who slew several of her companions before Eudocia managed to kill the assailant with her own hands. In the end, Theodosius took a different approach, and sent his spouse into exile in the Holy Land with more than enough money to keep her in comfort.

Constantinople's loss was the Holy Land's gain, for although Eudocia was a devout Christian, she was extremely sympathetic to other faiths. Eudocia permitted the Jews, banned from Jerusalem since 135, to return to their holy city, and financed all kinds of charitable institutions for Jerusalem residents. With the help of her husband's stipend, she constructed half a dozen splendid churches and monasteries in Jerusalem and extended the outer walls to include the City of David and Mount Zion.

One of her finest projects was the creation of a grand monastic complex dedicated to St. Stephen, an early Christian who was dragged out of Damascus Gate and stoned to death nearby on orders of the Sanhedrin, according to the New Testament. St. Stephen's tomb had been recently discovered by a parish priest near Beit Shemesh, and Eudocia was able to have the martyr's relics re-interred in her new sanctuary. Shortly before her death, she asked to be buried beneath the atrium of St. Stephen's Church, so that a procession of monks on its way to mass would walk over her tomb. Her only daughter was later laid to rest at her side.

In 1882, the scholarly French Dominican Order decided to establish a monastery in Jerusalem dedicated to St. Stephen (Etienne, in French). The order purchased four adjacent plots just outside Damascus Gate, intrigued by the broken columns and capitals that were strewn here and there among the olive groves and wildflowers.

The monks, well-versed in both the Bible and archeology, uncovered the walls of a large Byzantine church while clearing the land for construction. Excavations exposed vast sections of a stunning mosaic floor, well protected by 1,500 years of dirt, and revealed conclusively that the Dominican brothers had stumbled upon Eudocia's ancient basilica.

Soon after, St. Stephen's Church was reconstructed according to the exact dimensions of the original by following its walls and mosaic floors, and extending a step leading to the altar that was discovered in situ. A creative French architect let his imagination soar, and added 19th-century European stained-glass windows near the top of the basilica; the handsome pillars are topped with red and white stone in the avlak pattern fashionable in the East hundreds of years ago.

A few years later, the Dominican Order decided to open a biblical institute in which the Scriptures could be studied in the land of their birth. Called L'Ecole Biblique (The School of Biblical and Archeological Studies), the now prestigious facility was the very first research institute of its kind in the Middle East. All of the teachers at the Jerusalem institute are Dominican monks in residence; all of the priory's monks are teachers who specialize in biblical history, archeology and ancient languages like Syriac, Phoenician and Aramaic at the highest levels. Although they must teach their lessons in French, there are monks at the priory from Mexico, Portugal, Poland and Ireland.

WHEN I entered the light and airy priory for the very first time, I was struck by the sense of tranquility imparted by its design. I was also fascinated by several of the artifacts along the walls. A metallic copy of the Copper Scroll, the only Dead Sea Scroll found in situ at Qumran, hangs just inside the entrance. The original was unearthed by Dominicans from the Ecole Biblique in 1952, during one of the school's many digs. As a matter of course, it was presented to the reigning Jordanian government, which permitted the order to make a perfect facsimile by pressing soft copper against the original.

But it was the library that was most impressive. Located in the basement, enclosed within stone walls over a century old, it reminded me of my college days at the splendid, subterranean University of Chicago library. I could happily have spent weeks here, leafing through the library's 140,000 volumes. A few date back to 15th-century Spain and subjects range from New Testament material to archeology and hieroglyphics. Old-timers say that Eliezer Ben-Yehuda, the father of modern Hebrew, browsed this very library. He probably even perused an early edition of one of the books I saw on display: A Guide to Biblical Hebrew Syntax.

Brother Jean-Michel de Tarragon, who holds a PhD from the Sorbonne in cuneiform writing and teaches ancient languages, is also the institute's photographer. In his spare time, he works at transferring 15,000-18,000 glass negatives filmed with old-fashioned cameras into digital pictures on a compact disc. The walls of his workroom, the lecture halls and the ceramic restoration room are filled with photos of Jerusalem as it looked in the 19th and early 20th centuries. Indeed, says Jean-Michel proudly, St. Stephen's Priory has accumulated the biggest private collection of old photos of Israel in the world.

These days there are several Christian biblical research institutes in Jerusalem. Brother Jean-Michel, who is the prior at St. Stephen's, relates that they complement each other and work in harmony. For instance, when the nearby Albright Institute needs a large conference room for a lecture, teachers use the bigger facility at the Ecole Bibliqu of a fantastic sense of humor, is currently serving his fourth year as prior. One of his functions is the dissemination of harmony among men of different temperaments who will be living in close company for the rest of their lives.

At one time, says Jean-Michel, there was one dining room for the monks at St. Stephen's Priory and one for the students. Many changes have occurred since then, including the presence of women at the Ecole Biblique, and use of a common dining room and kitchen, in which everyone - including the prior - takes turns washing dishes and clearing up.

JEAN-MICHEL, BORN in Rouen, decided to become a monk when he was 21 and studying political science in a secular French university. Soon afterwards, he began attending a Dominican college, where his theological studies required a minimum of Bible study. He became so interested in biblical traditions that he asked to spend a summer in the Holy Land, and two years later he was permitted to volunteer at an archeological dig near Acre.

By now more interested in the Bible proper than in theology, he also became fascinated by ancient Hebrew and other early languages. Although he was meant to become a Dominican professor in France, he decided he wanted to return to Israel instead - specifically, to the Ecole Biblique. His superiors wanted him back in France, and he returned to complete his doctorate. But it was clear to him that he needed to spend the rest of his life in Jerusalem, and he made such a nuisance of himself that his superiors finally let him go.

After 32 years in Jerusalem, Jean-Michel is happy with his decision to live out his life in the Holy Land.

'The rules aren't as rigid as they once were, and I could have asked to leave if I were sick, or depressed because of the wars and intifada,' he explains. 'I have heard of several foreign priests that were permitted to return to France because of the tense situation in Israel - but they weren't from St. Stephen's Priory.'

The Dominicans at St. Stephen's Priory are surprisingly uninvolved in Israeli life. Although each of the monks is also a priest qualified to work inside a parish, there aren't any French-speaking Christians around who might require their services. Occasionally, a Christian Arab from east Jerusalem will ask them to preside over a wedding in the church. But this is rare, states Jean- Michel, who adds that a lot of east Jerusalem Christians have left the country. The monks' few Jewish friends are generally archeologists and other academics in the field, so 'we spend most of our time here in the priory.' Jean- Michel and I took a stroll in the large priory garden, where, in the distance, two guest lecturers were deep in some academic discussion. 'Underneath this garden are the remains of the Byzantine monastery,' Jean-Michel told me. 'We use the enormous cistern that fed the ancient priory to water the grass and flowers.'

Although I would have loved to stay longer, the time had come to leave. I walked reluctantly past the gate and into the noise and bustle of Jerusalem. Only then, as the gate swung shut behind me, did I realize how heavenly the quiet inside had been.