My name is Eitan Shomron, a tour guide licensed by the Israel Ministry of Tourism.

By EITAN SHOMRON
APRIL 28, 2010 14:40
1
(photo credit: 1)
Advertisement
I was born in Israel along with the newly founded state of Israel, in the middle of the 20th century. My parents, pioneers, who emigrated from Europe a decade beforehand, established a kibbutz in the Negev Desert. 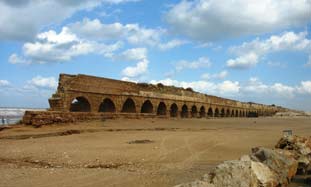 My experiences of a youth growing up in a young country, along with studies in history and a deep acquaintance with various ethnic groups in Israel, all have equipped me with superb tools to guide the inquisitive traveler.I, not just show the tourist the country, but attempt to get him/her to ask and to understand what takes place behind the scenes.As history is made by people, I try to find those small human vignettes that lie behind the big stories.Each tour thus becomes an odyssey into a deeper story, a story that is all truth.As an avowed tourist myself, I always attempt (and usually succeed) in designing a trip according to the wishes of the tourist, enabling both sides to get excited together at new discoveries.I invite you to join me in one of my excursions into the depths of the land of Israel.Touring Israel with Eitan

Eitan Shomron – Certified Tour Guide. Specializes in history, geography and ancient civilizations of the land of Israel (Eretz Israel).
Eitan specializes in overland nature tours throughout Israel, and ishappy to arrange customized itineraries to suit a variety of specialinterests, schedules and budgets. Eitan owns a fully air-conditioned, van and is ready to lead you on a voyage of discovery throughlittle-known, beautiful natural wonders and fascinating historicalremnants of the many cultures that have left their mark on the Land ofIsrael.
Tours can also combine hiking, camel rides, mountain biking andrappelling, and can include a wide range of ethnic menus featuringlocal delicacies. A number of possible trips are listed below:
Website: http://www.holot-midbar.co.il
Tel: 972 - 8 -  9366075, Fax: 972 - 8 -  9366074
Mobile: 972-505-322968, E-mail: eshomron@netvision.net.il
Advertisement
Subscribe for our daily newsletter