100 refugees and asylum seekers participate in academic program at BGU 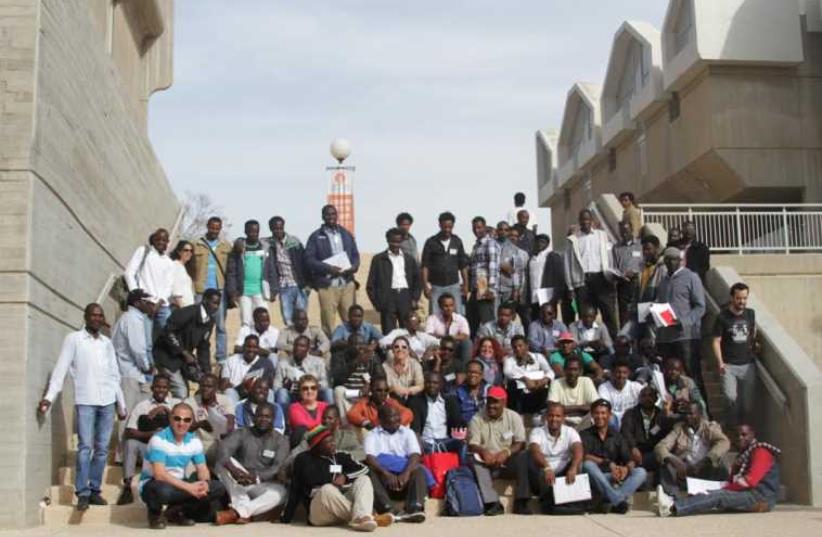 Refugees and asylum seekers at academic program at BGU
(photo credit: LIHED ADAM)
Advertisement
Some 100 asylum-seekers from the Holot open detention center on the Egyptian border received certificates of completion from Ben-Gurion University’s Free Your Mind project.The first graduates of the new academic program for refugees and asylum-seekers at the Beersheba school celebrated with a graduation party on Sunday.The course came about as a result of research on the resilience of asylum-seekers from Darfur living in Holot, conducted by Prof. Vered Slonim-Nevo and Dr. Maya Lavie-Ajayi of the department of social work.“During the research we asked the asylum-seekers, ‘What are your hopes for the future?’ They related how important it is for them to study and said their dream is to study at a university,” Slonim-Nevo and Lavie- Ajayi said.They described how they formed partnerships to create a program that would help fulfill the dreams of those living in Holot.“In cooperation with Moran Mekamel from “Ben-Gurion Students for Refugees and Asylum-seekers,” with many lecturers from the university, who volunteered to teach, and with the financial help of BGU and the [ Jerusalem-based] Center for International Migration and Integration and the European Union, we created a an eight- week learning program,” they said.Once a week, the participants were bused to the BGU campus for a day of study that included morning and afternoon classes and a lunch donated by Be’er Sova, a Beersheba-based non - profit that provides fresh, hot meals for the needy.Course choices included Basic and Advanced Hebrew, Introduction to Computer Sciences, Psychology and Education, Politics and Society, Crisis Management and Humanitarian Aid, Introduction to Philosophy, and New Media.Moran Mekamel, an MA student of social work at BGU and the head of Ben-Gurion Students for Refugees and Asylum-seekers, said the opportunity to study at the university was very import - ant for many of the detainees at Holot, some of whom hadn’t left the facility for more than a year due to depression and despair at their situation.“The program gave them the opportunity to come to the university and learn and feel like equals for a few hours,” said Mekamel.While Holot is officially called a detention center, it is run by the Prisons Service and all detainees have prisoner numbers registered in the prison system, “and so it is none other than a prison,” she said.It was important that the program participants were part of planning the program, for example deciding what courses should be included, Mekamel said. Kamal Abrahim, a 27-year- old man from Darfur who fled to Israel just over a year ago to escape the genocide in Sudan, took part in the Free Your Mind program.Abrahim said it is extremely frustrating being incarcerated and this program made him think “I can do something, I can accomplish something.“I feel now that they have pushed me to something,” he said of the courses and lecturers in the program.“I liked the philosophy classes; the computer sciences was really hard,” he said.Abrahim said he has been telling friends how good the program is and is pushing them to take it the next time around.Mekamel said that plans are in the works to continue and expand the program.